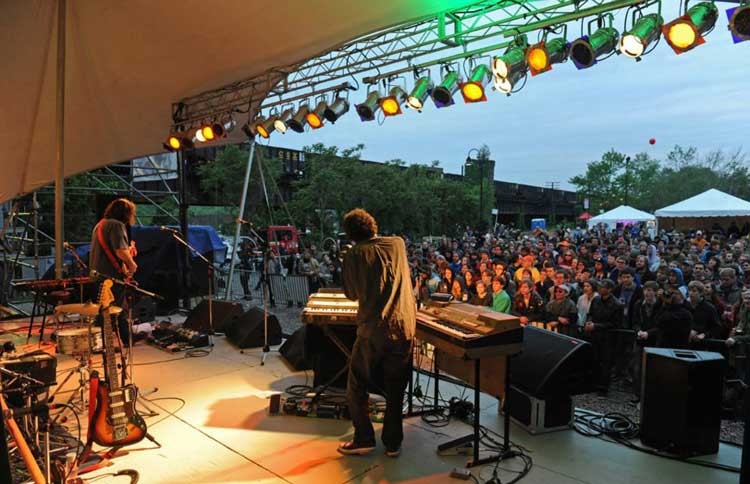 The shad weren’t biting at the inaugural Shadrock Music Festival by the James River -- the famously feisty fish must’ve been hiding out in warmer waters. The audacious 30th birthday bash for Style Weekly launched a new local music festival at Brown’s Island, which unfortunately occurred on a Saturday that was bone-cold, damp and drizzling most of the day. It’s a shame too, because there was some unusual music on the bill, including pioneering hip-hop and indie rock as well as current West Coast girl pop and hip-hop favorites.

Fans of these artists either didn’t cross over enough, or the $35 ticket price point proved too much, especially on such a bleak day.

“We were hopeful that the weather would be kind, but that's a risk you take,” Publisher Lori Waran says. “We did lots of research and planning, visiting other festivals all over the country. Best advice we received? Two words: rain insurance.”

The day started at noon, with few in attendance for the high-energy, hip-hop funk of seasoned locals Photosynthesizers, who have performed at previous Style events. Things didn’t pick up much as rain came and went, dampening a solid set by Charlottesville’s Invisible Hand, whose pop songwriting chops and tight group dynamic were still evident through the stage fog. Almost locals Kid is Qual picked up the pace with its electro-rock stylings, but if you weren’t big on robotic-sounding vocals via a distorted talk box, you may have been immune to their charms, which seemed built for immersive dance rock in clubs. Between sets early in the day, the reliable Scorpio Brothers also spun killer Virginia soul 45s that sounded great over loudspeakers in the rain.

The growing crowd loosened up a bit around 3 p.m., when reunited local power trio Kepone took the stage. Opening with a gritty take on the early Police rocker, “Next to You,” Kepone delivered a blistering set of melodic hard rock that touched on classics from their mid-‘90s catalog. With the combination of guitarist Tim Harriss’ precise rhythmic playing (he’s a world-class punk guitarist), Ed Trask’s always powerful drumming, and Michael Bishop’s intricate lead bass and grizzled vocals—the band proved again why they’re one of the best live rock acts Richmond has ever produced.

The atmospheric Seattle duo Shabazz Palaces followed with fragmentary hip-hop, which hearkened back to the genre’s earliest roots -- like the chants of the Last Poets -- while moving forward through laptop samples, congas, the spooky mbira, an African thumb piano, and an overall desert-dub mystique within their collagelike approach. Deep echoing beats and knotty and puzzling lyrical associations made their meditative music the most edgy and hypnotic of the day, fitting nicely with the moody weather.

Next up, the Dum Dum Girls, a California all-girl pop group came dressed with obvious attention to style, including a Nico-esque platinum blond frontwoman. But their glossy ’60s guitar pop could have used more memorable hooks and distinctive vocals -- although it had a few moments. Part of the problem was their sound, which suffered early from too much mid-to-low end, so the generally aloof vocals were further muddied. The issue was fixed about midway through the set, but by that time, it was hard to recapture momentum. People lined up to take photos with them afterward, though.

Yo La Tengo followed with the most uncompromising set of the day. True to form, they jumped all over the place stylistically, alternating instruments as they segued from droning numbers to keyboard driven indie pop and soft, acoustic strummers.

As is the case with Yo La Tengo shows, if you’re not into noisy extended jams, which fit well with the nearby train running over them, you were probably bored during segments of their long set. The more concise numbers, including catchy favorites “Stockholm Syndrome” and “Sugarcube” went over well with the crowd. Guitarist Ira Kaplan, who somehow had a funny banter bit involving “MSNBC, ‘Friends’ TV show and the Monkees” easily delivered one of the night’s most impassioned performances. His flailing solos seemed to be electrocuting him slowly.

The popular favorite of the day, judging by the largest crowd, were the ’80s hip-hop pioneers De La Soul, who mentioned that they hadn’t played in Virginia for at least a decade. Their well-oiled show was just what you might expect: Seasoned veterans who never stopped hyping the crowd, refusing to allow the bass-heavy party vibe to die down as they revisited career-making early numbers like “Potholes in My Lawn” and “Me, Myself and I,” mixed in with more recent numbers and shout outs to J. Dilla, the Treacherous Three and Bobby Brown. The latter was in town with New Edition at the Coliseum.

Waran says that the paper was incredibly honored by the diverse crowd of Richmonders who did come out to enjoy the music. “It is a testament to the readers of Style Weekly and the community that they would still come out -- and stay out -- in support of this inaugural festival and two local nonprofits, Fetch a Cure, and SPARC.”

A major lesson here it seems: Anytime you go over $25 in price in the Richmond market, even for eight bands, you better make sure the river is stocked in your favor. But gloomy weather aside, Waran doesn’t seem fazed about future prospects for the festival. “The good news is we've already got a ton of great ideas brewing for next year. So stay tuned,” she says.