Sex in the Spring

Virginia Rep raises the temperature — and the roof — with "Spring Awakening." 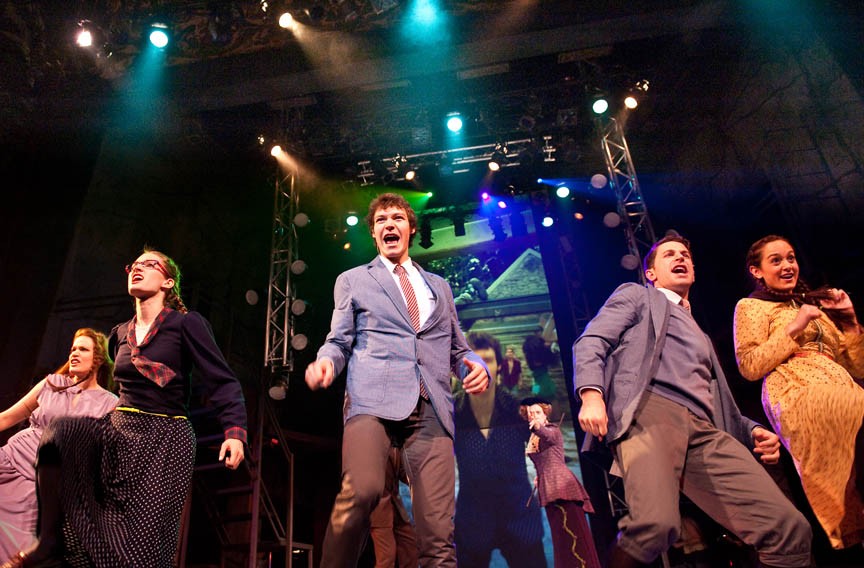 Like the angsty teenagers whom the musical is about, "Spring Awakening" is boisterous, melodramatic, unpredictable, awkward and preoccupied with sex. Like a doting parent, director Chase Kniffen has carefully shepherded this production to the stage, bringing a keen focus to the first offering by the newly minted Virginia Repertory Theatre company. While that focus may mute some of the freewheeling intensity of the show, it also results in a stirring crowd pleaser punctuated by a couple of bravura performances.

First among these is Ali Thibodeau's portrayal of naive teen Wendla. Pale with sad eyes, slight of stature but with a big voice, Thibodeau imbues Wendla with guileless urgency as she starts the show begging her mother (Susan Sanford) to tell her how babies are made. It is 19th—century Germany, though, so her mom provides only the most oblique description, setting the stage for Wendla's sometimes disturbing relationship with brilliant but rebellious Melchior (Oliver Houser).

Their story lies at the center of a maelstrom of coming-of-age sagas: The anxious Moritz (John Mincks) is tormented by his budding sexuality, stoic Martha (Gigi Galiffa) suffers physical and sexual abuse, and two schoolboys (Daniel Cimo and Owen Wingo) explore a forbidden love. At every turn, adults provide ineffectual counsel at best, or deliver cruel punishment at worst (all adult roles are played by Sanford and Daniel Moore).

Using an 1891 play by Frank Wedekind as their foundation, show creators Duncan Sheik and Steve Sater effectively dramatize the treacherous transitions that have always marked the teenage years, adding an explosive rock score to make 19th-century emotions ring true to 21st-century ears. Kniffen reinforces the universality of the story by projecting MTV-like videos of the actors in modern garb on a monumental screen that stretches to the rafters at center stage, the stark but expansive set design is by Brian Barker. With ensemble members popping up in the midst of the theater's onstage seating to accompany some songs, the effect is one of being drawn into a teenage fever dream.

The tall and lanky Houser makes a fine match for Thibodeau, his Melchior a mix of smarts, sensitivity and just a touch of darkness. Another standout is Christie Jackson as Ilse, an earthy beauty who offers Moritz a slice of hope. Mincks captures Moritz's nervous agitation perfectly, and his rock star moves are on target, though his voice struggles occasionally on opening night.

Music director Sandy Dacus does phenomenal work with the show's vocal arrangements, the girls' ensemble being particularly strong. The onstage band sounds great, though I couldn't help but wish for a little more percussive raucousness. Still, all of the elements come together with dramatic force for the second-act showstopper, "Totally Fucked."

Virginia Rep has pulled out all the stops for this production, the dazzling techno-light design by Lynne Hartman being only the most obvious evidence. "Awakening" enjoyed a cultlike popularity during its two-year run on Broadway and the strength of this production should guarantee significant local support as well. S

"Spring Awakening" plays at the November Theatre (formerly the Empire) through July 22. Go to va-rep.org or call 282-2620 for tickets and information.