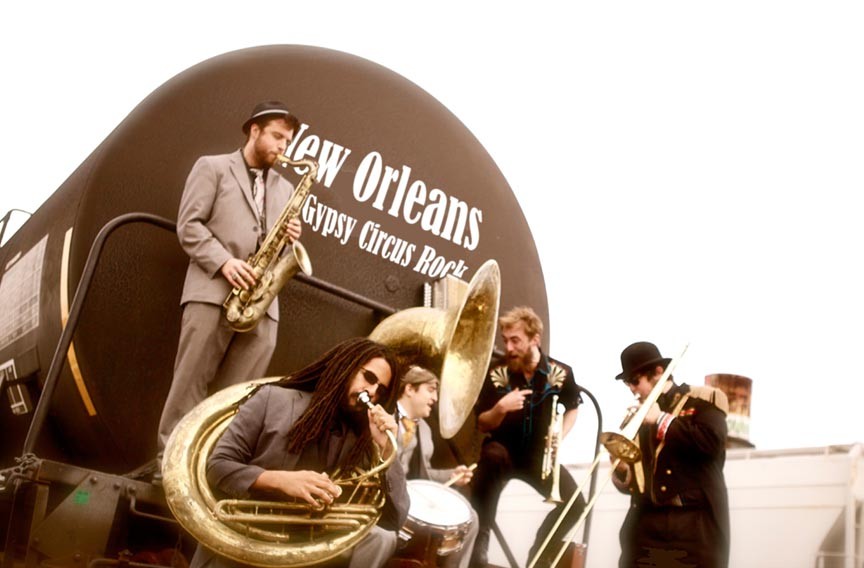 Noah Adams is no stranger to constant motion. The Oregon native left home at 17 and roamed the globe taking a series of curious jobs to fuel his wanderlust, including work at a mental institution and teaching English abroad before settling down in New Orleans. Drunk on the strange that bubbles up from the crazy bayou, Adams is frontman of the Dirty Bourbon River Show, leading a band of vaudevillians that fuses traditional, French Quarter street music with gypsy punk, blurty brass and a loopy accordion to make devilish songs that keep the party moving. "There is no time to stop," Adams says. "We're so broke and hungry, but people out there need music so we're not stopping." Adams took a break from prepping for a video shoot to share tales of his sonic circus with Style.

Had you been playing jazz or blues prior to spending time down in New Orleans?

I was actually playing a lot of folksy stuff, finger picking and Delta blues. You can trace the New Orleans, Latin and West African influences that make up some of that, but it's also dissimilar in that it comes from different regions. I just played every day and tried to learn as much as I could. If you are going to do things, do them right. Be authentic. Study the styles up front and in person.

Your capabilities suggest you've been playing every instrument you could get your hands on for years. When did you first start?

I wish I had played as a kid. I played piano for the first time at 20. At 21, I picked up guitar, and then the trumpet when I moved here, then banjo, accordion, and so on. I hope one day to be an old man living here building combination instruments.

Bands like Dirty Bourbon are getting a lot of credit for preserving some of the traditional elements of New Orleans music. What are your thoughts on that?

I'm a middle, hybrid, cross-pollination kind of guy. That said, I think it's really important to understand and know all of the styles of music that contribute to the kind you are playing. It's also important to move things forward and be progressive and creative. You can pick up an ultraviolet hue and start painting with it, but you should really know what primary and secondary colors contributed to making that color.

What's the secret to transforming a band into "a show"?

I try and make five people sound like 12. I can't afford 12 players. What I can afford is the time on the compositions and working with the players to pull out more than what one man can usually do.

What's the music scene like on and around Frenchmen Street for a local?

There are two types of players. You have the fill-in session guys who don't really have a band, but are really solid players that learn all the standards. Then you have project-based guys that are trying to write, compose and push a new idea forward. I try to keep my chops up on at least two or three instruments at a time, so I can fill in at gigs. I mean, you gotta pay the rent. But my primary focus is original music. There are tons of gigs here, but it's not the easiest to make a dime here because the base of working musicians is large.

You guys have cranked out six albums in less than three years, including your latest, "The Most Peculiar Thing." How is one group so prolific?

I write so much music. It's a weird curse that takes over my day and makes me not do the things I'm supposed to do. It's important nowadays with all the competition to make as much thoughtful, quality material as possible. People can access a lot of music and they go through it quickly.

Last year you chronicled the journey of your beard on YouTube. Have you embarked on another to kick off the New Year?

Yes. It'll probably still be in the elementary stages by the time I get to Richmond. We are going to play for the president in June for the 2013 Radio and Television Correspondents Dinner in Washington. My goal is to have a big ol' fluffy one for him. S