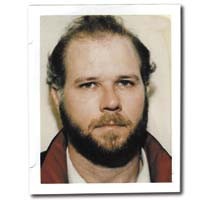 Glenn Barker says police have unfairly targeted him for years, trying to connect him to cases with no other suspects.

He claims that in addition to being wrongly convicted in Katie Worsky's death, and unconnected to the murders of Cynthia and Heather Johnson, he's been persecuted by law-enforcement agents in a number of cases.

Among them: the high-profile kidnapping and murder of Kristin and Kati Lisk, who disappeared from their home in Spotsylvania in May 1996 and were found murdered five days later -- less than four months before Cynthia and Heather Johnson's deaths.

In 2002, DNA evidence and an automobile trunk palm print showed definitively that Barker wasn't the Lisk killer. They implicated Richard Mark Evonitz, who shot himself as officers closed in on him in Florida. That evidence also conclusively linked Evonitz to the murder of 16-year-old Sophia Silva, another Spotsylvania teen killed eight months before the Lisks.

Barker says police have named him publicly as a suspect even when there is no evidence to implicate him, fanning public perception of him as a boogeyman.

Barker says that he used to be a person who would offer assistance to anyone who needed it, but the constant harassment has caused him to withdraw. It's "changed me into a person who doesn't care about my fellow man," he says.

For Kelly Bergh Dove, 20, her job at the Imperial gas station on South Main Street in Harrisonburg was a temporary stop on a way to a better life.

The married mother of a 4-year-old daughter, Dove had finished high school a year early and was registered to attend Blue Ridge Community College in September.

Dove's three sisters all worked at the Imperial station, then the lone building on an isolated stretch of road about a mile south of the James Madison University campus. On Thursday night, June 17, Dove agreed to trade with one of her sisters and work the overnight shift.

After midnight on June 18, Dove called Harrisonburg police to report that a man driving a silver Ford had been harassing her. She explained she was working alone and implored, "Could you keep an eye on me?"

In a second call, she reported the man had come in and had been "dressed improperly." She'd received a threatening phone call, and when she called police a third time, just before 2:30 a.m., she sounded panicked. "Please hurry," she said. "He's back."

According to published accounts, police arrived at the station just two minutes after Dove's third call, but they found only her purse and a magazine she'd been reading undisturbed on the counter. Dove was gone.

Her parents, Fred and Rachel Bergh, still don't know what happened to their child.

Rachel Bergh says she didn't learn Kelly was missing until she arrived, and she was bothered by the way police seemed to be handling the scene. They never closed the store, she says, never took fingerprints. She also doubts that they had arrived as soon after Kelly's call as they claimed.

In the months that followed, news reports claimed that Barker -- who sometimes drove a Ford -- had been seen painting his car in the days after Kelly disappeared.

Barker maintains that police ruled him out as a suspect in Dove's disappearance because he'd been at a family reunion where several relatives verified his presence. And the Berghs say they believe someone else was responsible, a man Kelly had known in school.

"He had a silver Ford," says Kelly's sister, Elaine Bergh, declining to name the suspect. "He'd been in trouble before with indecent exposure and phone calls," she says, "but there was nothing concrete they could prove."

Still, the Berghs say they wonder about Barker. One of Kelly Dove's friends traveled to Charlottesville every day of Barker's 1983 trial. "She wanted to make sure it wasn't him," Elaine Bergh says.

A petite strawberry blond, Paula Jean Chandler was 18 and a new graduate of Albemarle High School working for the summer at El Cabrito's Mexican restaurant.

After work that night, Chandler asked a co-worker if she could go with him to his apartment to watch television. Two days later, a fisherman hooked her body near the dam at the Rivanna Reservoir.

Although headlines about the case would soon be eclipsed by Katie Worsky's disappearance, Chandler's murder ignited a firestorm. Chandler had water in her lungs, suggesting drowning, but she also suffered more ominous injuries: two head wounds from blunt trauma.

The case generated controversy when a key piece of evidence was disallowed.

Michael Currie, a 19-year-old cook, admitted that Chandler had come back to his apartment where he said they'd watched the movie "Stripes." But he insisted that he had dropped her back at her car at the restaurant around 3 a.m., though he hadn't stayed to watch her leave.

Police immediately suspected Currie, and a search of his apartment revealed one of Chandler's shoes. The other had been found still on her foot in the reservoir. Authorities arrested Currie. Those who knew Currie, though, say that despite the arrest and the shoe, they never believed he was guilty.

Now 43 and a Realtor, Currie says Albemarle police "closed their eyes to the possibility that Glenn Barker had anything to do with Paula Chandler."

Among Flynn's reasons for suspecting Barker: Chandler, who had a boyfriend, had received a call from another man that evening, someone she may have been planning to meet later that night. Also, Flynn says, the time of her death was based on the autopsy report of food found in her stomach. El Cabrito's employees said she'd eaten dinner at the restaurant the night she disappeared, but Flynn says the food found in her stomach was not offered on El Cabrito's menu.

Barker lived in an apartment on Georgetown Road at the time, just a mile from El Cabrito's, and Chandler lived with her father in the Southwood Trailer Park on Old Lynchburg Road, close to where Katie Worsky disappeared.

Barker denies having known Chandler or having any role in her death.

There has never been a conviction in the case. The evidence discovered in Currie's house was ruled inadmissible because police hadn't told Currie he was a suspect when they came to check his apartment, and he allowed them to do so without a warrant. Without the shoe as evidence, the case fell apart, and charges were dropped.

Today, Albemarle Police Lieutenant John Teixeira says the department considers the case closed since they believed they had the right person when they arrested Currie but simply couldn't make the charges stick.

Because of Cynthia and Heather Johnson's deaths in 1996, Barker remained on police radar.

In South Brunswick, he took jobs in construction and also decided to donate time to a community group. Barker's choice of community group, however, pushed him back into national headlines -- and traumatized dozens of parents.

In 1998, it was revealed that after volunteering at the YMCA, he'd been hired part-time to coach a girls' basketball team. When police officers reported his history to YMCA officials, Barker was fired and all parents were notified.

"He was an all-around nice guy," one father of a child on Barker's team told a reporter. "Now she's supposed to be afraid of him," he said, adding that he'd told his daughter to "run in the other direction" if she ever saw Barker again.

South Brunswick YMCA executive director Tom Libassi was on the Y's board when the situation arose. Saying the files from that time are now in storage, he declines to offer details on Barker's hiring, but he recalls the firing. "We changed a number of policies and procedures as a result of that," he says.

Published reports indicated that Barker lied on his application, and Barker admits he did not answer one question about previous felony convictions. Barker says he just wanted a chance to donate his talent and never specifically asked to coach girls. Barker insists he was never alone with any child, and he acknowledges that omitting the information was "stupid."

In 2002, New Jersey officials distributed fliers announcing that the convicted child killer, then living in South River and working in Milltown, was known to stop to help female motorists.

As he did in Virginia, Barker again tried to assure his neighbors that he posed no threat. In his own fliers, which he placed on car windshields around his house, Barker wrote, "No one in this community or any other community has anything to fear about me."

Despite warnings from a Middlesex County prosecutor against "vigilante justice," Barker says his car was egged, and once-friendly neighbors stopped speaking. Indeed, Barker says today that he has no friends, and all romantic relationships cease after police tell his girlfriends that he's dangerous.

If police feel a duty to warn people about Barker, it may be because he's never been convicted of a sex crime. Therefore, he has no duty to register his whereabouts, and he's free to move from locality to locality, state to state, without telling anyone. S