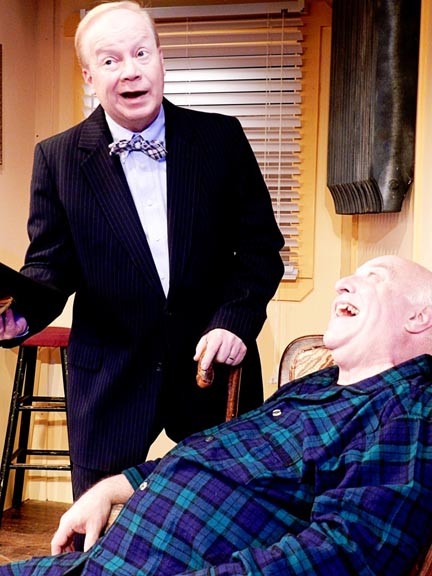 It's a winning comedic formula that playwright Neil Simon milked into stage, television and film versions of "The Odd Couple." Following that trusted setup, Simon went on to write "The Sunshine Boys," playing at Swift Creek Mill Theatre.

Al Lewis and Willie Clark once were a big act on the vaudeville circuit, but after 43 years of yucks, Lewis decided to throw in the towel. Eleven years later, the duo is reuniting for an appearance on a CBS retrospective, and four decades of insults and backbiting are all coming back to the surface.

Teetering on the brink of senility, Willie (John Hagadorn) wants to continue working, even though he has trouble recalling his lines for commercials. He's still bitter about the duo's breakup and won't listen to any of the well-intentioned advice his nephew and agent, Ben (Dan Stackhouse) has to offer. Stackhouse and Hagadorn play well off each other, with Stackhouse serving as the straight man for Hagadorn's wisecracks.

But the show really takes off when former collaborator, Al (Steve King), takes the stage. King and Hagadorn seem as though they too have had a four-decade comedic relationship. With every dig and minor slight, you get a sense of how deeply rooted their animosity is for each other, and King and Hagadorn are quite funny together. As the caretaker who's learned to deal with Willie's quirks, Diana Carver is all sass as Nurse O'Neill.

With its comical performances and solid script, "The Sunshine Boys" is a veritable crowd pleaser for all ages. S