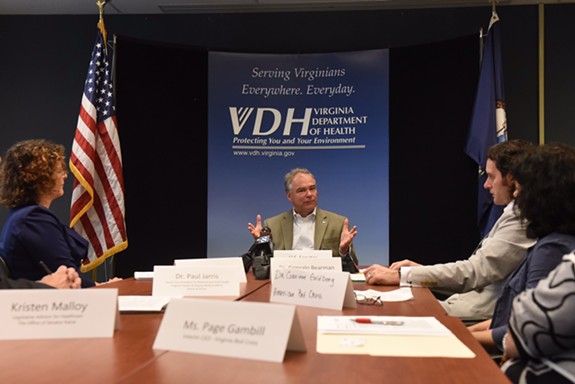 Rumored vice-presidential candidate Sen. Tim Kaine appeared at the Virginia Department of Health in Richmond this morning to discuss how the state and nation can prevent infant deformity caused by the zika virus.

The mosquito-spread virus has caused an epidemic of microcephaly in most countries south of the United States and in Puerto Rico. Kaine called it “huge and significant.”

In the Senate, Kaine serves on the Armed Services, Budget and Foreign Relations committees. He likened the zika virus, which can slow the brain development of unborn children, to a “national security issue.”

During a question period with reporters, Kaine was informed of FBI Director James Comey’s announcement that he wouldn’t seek criminal charges against Hillary Clinton regarding classified emails she kept as secretary of state on her home computer.

The Democratic presidential hopeful has said she was innocent of any wrongdoing. Kaine, rumored to lead the list as Clinton’s possible running mate, replied: “I have long believed ... what Secretary Clinton said.”

He declined to respond to questions about a possible vice presidential run, saying, “The only role I am playing with the campaign is to try to be helpful in Virginia.”

There have been no recorded cases of zika in Virginia, but a number of them in the United States outside of Puerto Rico have resulted after people returned home from traveling to infected countries, notably in South America.

“This is a critical health concern throughout the Western Hemisphere,” Kaine said at the public meeting, which included state Health Commissioner Melissa Levine and several other public health specialists.

Despite the obvious dangers of the virus, Kaine said that Congress is deadlocked about how to prevent the spread of the disease nationally. Rather than push ahead with $1.1 million in funding appropriations as the Senate wants, the Republican-controlled House of Representatives wants to cut spending in other parts of the budget first.

Funding should be provided now, Kaine said: “Let’s do it as fast as we can and as smart as we can.”

Other than warn travelers and have them get checkups when they return home from infected areas, he said research at the National Institutes of Health and the Centers for Disease Control and Prevention should be given money to come up with vaccines.

Levine said that the state Health Department has a website to provide information about the virus at zikava.org.

Some prevention measures can be as simple as making sure things that can collect rainwater, such as plastic swimming pools or wheelbarrows, are dumped of liquid every week.