Meet the designing elf who brings the holidays into the majestic Jefferson Hotel.

Do you find the prospect of stringing lights on the house and shrubs, or even putting up the Christmas tree, daunting?

Consider what awaits J. Rick Lunsford for the 21st year. As florist and director of retail sales at the Jefferson Hotel, he has the Herculean task of conjuring holiday magic at one of the city’s most enduring, and endearing, traditions that dates to the hostelry’s opening in 1895.

Since then, except for when the hotel was being renovated, even the most holiday-adverse visitor who comes to wine, dine, stay or just gawk at the splendor of the belle epoch interiors bedecked in holiday décor, has been awed.

“Adding holiday décor to this already exuberant hotel is a ‘more is more’ experience,” Lunsford says. “Every year we add new decorations and make changes but always stay with the traditional red, green and gold color scheme which complements the hotel.” 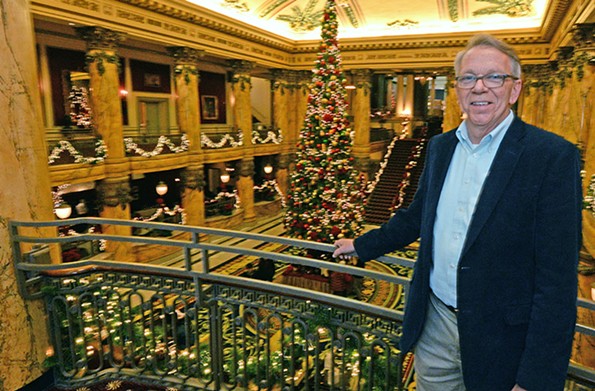 Specifically, this involves strategically placing some 20 Christmas trees throughout the landmark, hanging 100 wreaths and draping hundreds of yards of garlands and innumerable strands of small, clear lights. In addition, hundreds of live poinsettias are imported to animate highly travelled areas.

For Lunsford, this tightly scheduled decorating effort requires militarylike precision that he honed during a generation of experience. Decor must be in place by the official Rotunda tree lighting, which is held the first Monday after Thanksgiving. That is Dec. 2 this year. The festivities are open to the public for the 33rd year with Santa and Mrs. Santa Claus presiding. For days to follow past New Year’s, thousands will flow through the hotel’s interconnected, multilevel lobbies.

Lunsford, who forages for new props and decor throughout the year, says “I have stacks of decorating magazines and books around me. I’ve visited many hotels to see their decorations including hotels in Paris, London, Los Angeles, San Francisco and New York.” He also watches decorating videos on YouTube in search of new ideas. While his annual design plan is set by October, he says decorations are pulled out of storage to be refreshed in early November.

With his characteristic broad smile, Lunsford calls himself the head elf, and acknowledges others who assist in decorating. In addition to designers Ron Beatty and William Grizzard, five other elves rework wreaths, fashion centerpieces and make bows.

Installation swings into gear on Thanksgiving weekend. “The Friday after Thanksgiving is our really big day,” he says. The 30-foot tree in the Rotunda goes up then, an eight-hour operation. “An outside crew assembles and decorates the tree. With a 35-foot lift, it’s safer to have professionals take care of that. We assist with six or more helpers on the floor adding bows and ornaments, and handing them up.”

The Rotunda’s grand staircase is a nationally known architectural highlight of the interior and Lunsford says he usually decorates it himself.

“It is thought that the staircase was the inspiration for [Scarlett O’Hara’s Atlanta home in] ‘Gone With the Wind,’” wrote Richmond author John Edmonds, in his recently published book, ‘Where Scarlet Never Fell,’ a semiautobiographical account of working as a desk clerk at the Jefferson in the 1970s. “The staircase in Hollywood is probably long gone, and this is as closes as any of us is going to get to it. It might as well have been where Scarlett fell.”

The Saturday after Thanksgiving is another full day of decorating and fine-checking details at the staircase and points beyond.

Lunsford’s studied fine arts in college and he once worked in display at Miller & Rhoads, a major Richmond-based department store chain. Its colorful East Grace Street display windows at the holidays featured electric railroads, animated snowscapes as well as nativity scenes before the company closed in 1990, after 105 years of operation.

Lunsford began his career at the Jefferson 21 years ago when he established Blooms, an in-house florist shop that catered primarily to weddings and special occasions at the hotel. Gradually, he added home decor and accessories to the merchandise mix. As the holidays approach, he switches to holiday merchandise.

While Lunsford and team are decorating the classically inspired public spaces, Jefferson chef Sara Ayyash and her crew are creating an elaborate culinary display-- expect gingerbread and spun sugar — that is unveiled just outside the hotel’s Lemaire restaurant the same evening as the tree lighting.

That many folks put a visit to the Jefferson at the top of their holiday agenda each year is a high compliment, Lunsford says: “The steady flow of guests only enhances the excitement of the season to me.”

He smiles when asked about seasonal decor at his house in the Sherwood Park neighborhood on the North Side. “Oh, your home must be gorgeous at Christmas,’” he often hears. “Yes, there is a wreath on the door and a tree,” he says, adding: “Let’s call it subdued.”

He spends Christmas day at his family’s farm in Pittsylvania County.

The Jefferson tree-lighting ceremony is Monday, Dec. 2, at 5 p.m. Free admission. At noon during the season, Music at Midday programs will be presented in the lobby featuring local performance groups. The displays remain until Sunday, Jan. 5.

Back to the Holiday Almanac