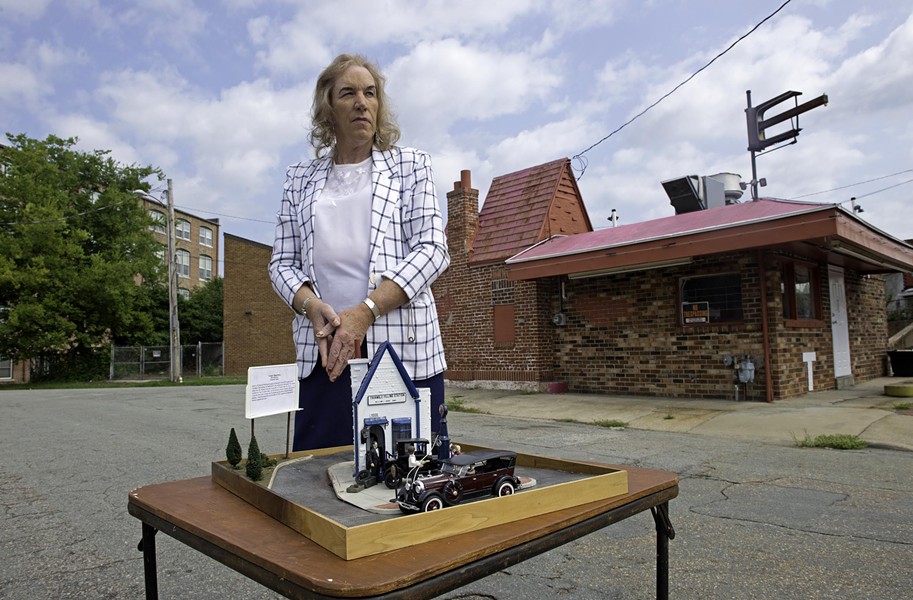 Ellen Shaver was born in 1950 with the wrong parts.

“I was Ed Shaver then,” she says. “A rough guy, a bohemian, with little direction. I smoked, drank and painted cars for Earl Scheib, Leo Khoury and [used car dealer] Mad Man Dapper Dan — I played cards with him.”

She started building plastic model cars as a young boy. “Automobile models represented those places I dreamed about,” Shaver says, her brown eyes cool and steadfast. “You could build them any way you wanted.”

Today those early models can feel like lingering remnants of a masculine life long passed — a life filled with confusion, bullying and three suicide attempts.

Shaver recalls wanting to be a female from age 6, playing dress-up with a neighborhood girl. “She thought it was neat I wore a petticoat and had tea,” Shaver says.

As a Tuckahoe Junior High pupil, Shaver would escape to a tree house with a secret box of clothes. “I would put on a skirt and a top and I could be at ease with myself, if even for an hour,” Shaver says. “I could finally be that little girl that I dreamed of being.”

Then her father found a pair of tights hidden in his room, Shaver says: “He beat me and threatened me with Fork Union [Military Academy].”

As an older teenager in the late ’60s, Shaver sought solace Saturday nights at the Crossroads Coffee House on Franklin Street, first as a visitor then a host. Under manager Steve Parks, Shaver watched a who’s who of the Richmond folk scene pass through, including Duck Baker, Rodney Bryan, John Bradshaw, Rick Richardson and Gary Gerloff.

Shaver also found support for her model building. “I was a decent sculptor,” she recalls. “Steve and the others encouraged me to keep building the models.”

“I thought, ‘There’s someone as crazy as I am,’” Shaver says. “I was so deep in the closet — this was Richmond, after all.”

Rather than ask the cliché, “How does it feel to be a woman” questions, Shaver says, she focused on specific, educated topics such as procedures and male-to-female transitioning. After the interview, an impressed Jorgensen called him aside.

“Why don’t you come out?” Jorgensen asked.

Shaver was paralyzed, she says: “She must have read me like a dictionary.”

Shaver soon left for Southern California on Jorgensen’s advice, but returned to Richmond not long after, miserable and an alcoholic. Shaver fell into Richmond’s early-’70s counter- and street-queen-culture that revolved around late-night gatherings led by a flamboyant Donnie “Dirtwoman” Corker at the Toddle House restaurant at Ryland and Grace streets.

After a stint in Dallas’ Upper Greenville District in the ’80s, Shaver quit alcohol and drugs and again returned to Richmond in 1991. She was driving a wrecker for Edwards Auto Care when she read a classified ad in Style Weekly for the Virginia Secret Transgender Group.

After an interview, Shaver was invited to Tuesday night gatherings at Babe’s in Carytown. Around this time, Shaver again tried to commit suicide. She credits Penny Huggins, a preoperative transgender woman and HIV counselor at the Fan Free Clinic, with saving her life.

While seeing Huggins professionally in the spring of 1993, Shaver began her transition to a woman, changing before their meetings from dirty mechanics clothes into a skirt in the back of her van. But there were still some surprises to come. 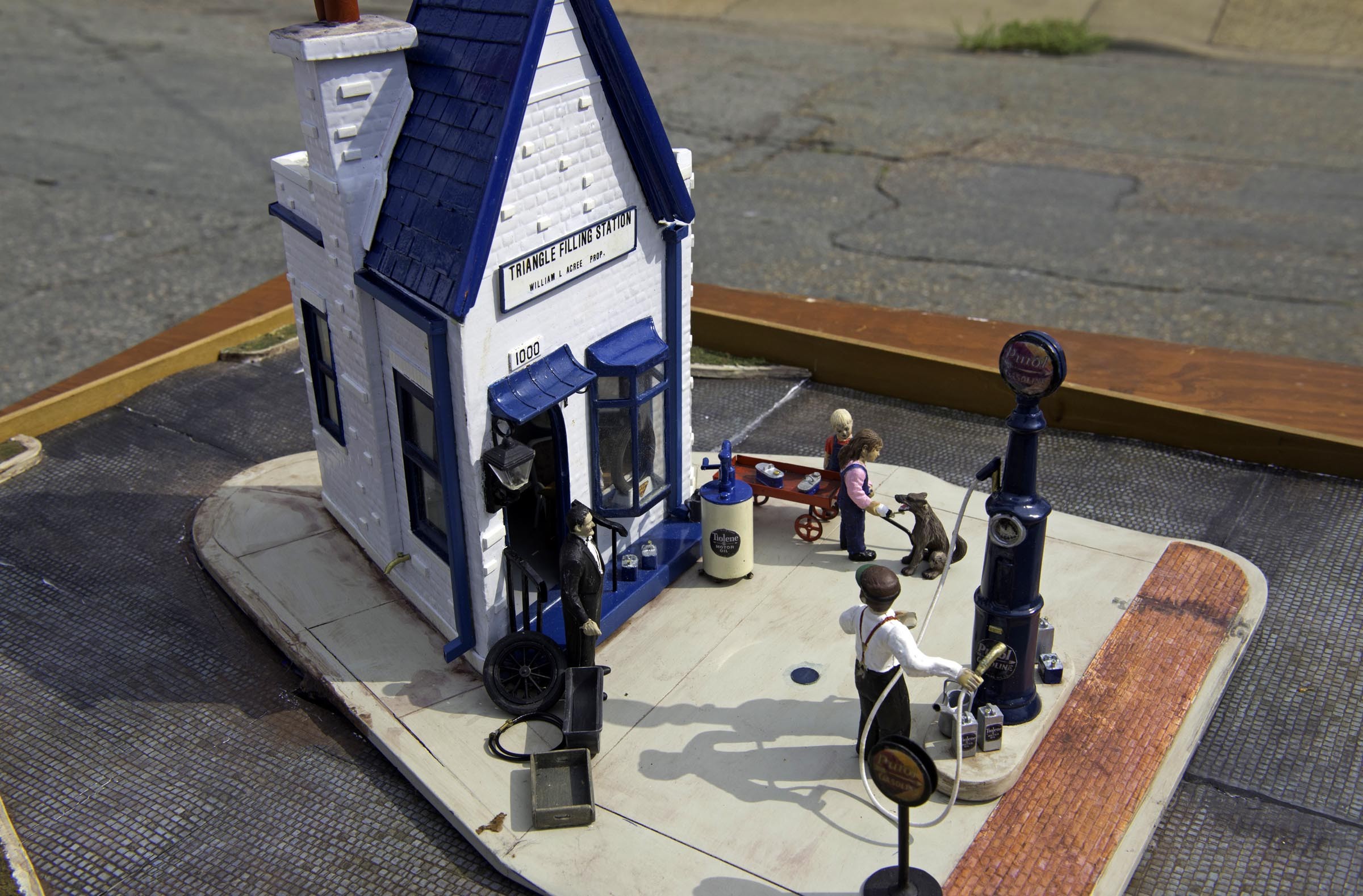 In 1996, Shaver met a woman at the former Upstairs Lounge on Cary Street. They married and had a son two years later. After several years of living in separate sides of their house, they divorced in 2011. “I thought Ed’s thing was just a quirk, a phase,” his ex-wife says, preferring to remain anonymous. “It was extremely difficult.”

Today, Shaver draws disability, but also maintains and brokers antique cars and assists in movie prop work, such as helping hang movie lights from the State Capitol for the film “Lincoln.”

Through it all, the sculpture work has remained a steadying influence. Shaver faithfully reproduces by hand only architecturally significant filling stations, with real tile roofs and period-authentic paint and accessories.

“Richmond’s history around the automobile is always overlooked,” Shaver says of her detailed recreations. “We were the last city to have examples of Greek revival, Swiss chalet and colonial revival service station architecture prototyped here. … When Walter Teague designed Texaco’s ‘porcelain box’ in 1932, he was looking in Richmond for inspiration.”

Politically conservative, Shaver also seems to have reached some balance in her personal life — or at least a new credo.

“I refuse to be a victim,” she says after a pause. “I’m tired of being ashamed of who I am. I am a proud parent with a teenage son who is going to be in Governor’s School next year. I am raising that child into the young man that he is by showing him that I may be a trans woman but I am not ashamed of that. I pay taxes, obey the law, I go to church and do volunteer work. I want to show transgender people in a positive light. I am not a freak.”

After enduring social and personal demons, plus the procedures, electrolysis, testosterone-blockers and estrogen, Shaver says she wouldn’t wish being transgender on her worst enemies: “The beatings? Being made fun of? The threats of electroshock therapy down at MCV in the early ’60s? No.”

“I consider myself a proper lady and I take a lot of time and effort to look my best every day,” she says. “Otherwise people will say I’m just a man in a dress.” S

There is a show of Shaver's creations on Wednesday, Aug. 13, at Taza Coffee and Creme upstairs, from noon to 4 p.m. at 5047 Forest Hill Ave.