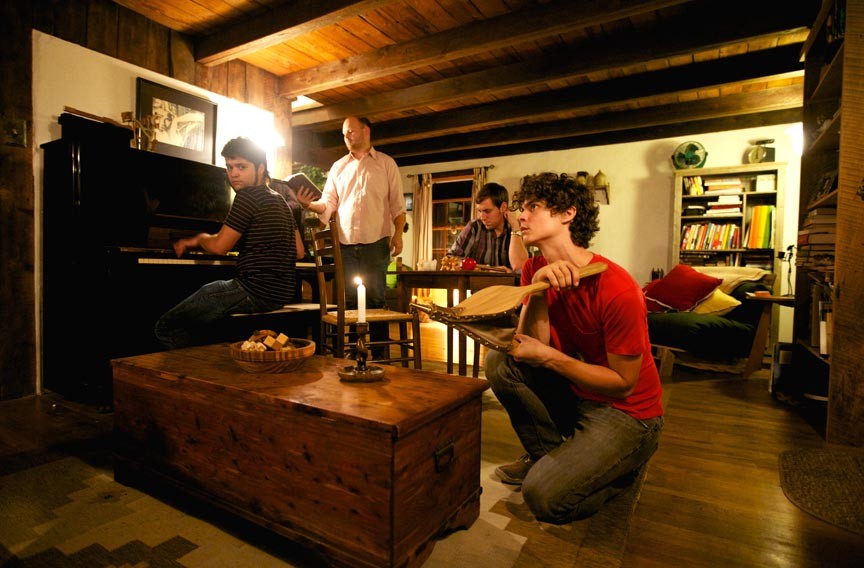 The Invisible Hand, according to 18th-century Scottish economist Adam Smith, was the self-regulating force behind stable financial markets.

"I'm drawn to music that is melodic," Smith says. "When I hear a song, I'm always drawn to the melody line first."

Audiences are happily humming along with Invisible Hand, which put a forceful, sense-expanding spin on Smith-penned songs such as "Two Chords," "Don't Wait For Your Third Eye," and "There's Room in My Will."

C-Ville Weekly calls the hard-working quartet "Charlottesville's favorite indie rock band," while James Ford of the local Nailgun Media blog hails the group's "unstoppable" live show. "Their songs are perfect slacker anthems of the Pavement variety, mixed with the smart post-punk of Wire and the ebullient anthems of the Zombies," Ford raves. Even the anchors on the local CBS affiliate, WCAV-19, have weighed in, proclaiming the Hand "the best band in Charlottesville."

The group emerged in 2006 when Smith, who had played in Truman Sparks and other groups, needed some players to fill out a tour he'd booked in support of his one-man-band recordings. Inspired by common influences ranging from '60s psych pop to Guided by Voices, Smith filled out the instrumentation with some of his favorite locals -- drummer Adam Brock (the man behind another highly touted Charlottesville act, Borrowed Beams of Light); guitarist Jon Bray, a fellow refugee from Truman Sparks; and bassist Thomas Dean, a well-known screen printer who was with Smith in a band called Order (of the Dying Orchid).

"They are all excellent musicians," Smith says. "When we started, they would rely on me for the arrangements, but now they all give input and incorporate their ideas ... which is pretty much the reason for being in a band in the first place."

A bartender at the C&O Restaurant when he's not on the road (the group's well-weathered 1995 Ford Wagon van formerly belonged to Richmond's Prabir and the Substitutes), the floppy-haired Smith is excited about the band's forthcoming EP, a spirited follow up to its critically-acclaimed 2010 debut disc. The forthcoming five-song release, recorded at Smith's home studio, is amusingly titled "Aja," after the famed Steely Dan album. "You wouldn't know it from listening to us but we are all huge Steely Dan fans," he says with a chuckle. "We just hope Donald Fagen and his lawyers understand."

Invisible Hand will be among the bands performing at the Shadrock Music Festival on April 28 on Brown's Island. Tickets $35. For information, go to shadrockmusicfest.com.