Opinion: "Let’s form Renegade Health Care. We can work on each other. Just YouTube the procedure and follow along carefully." 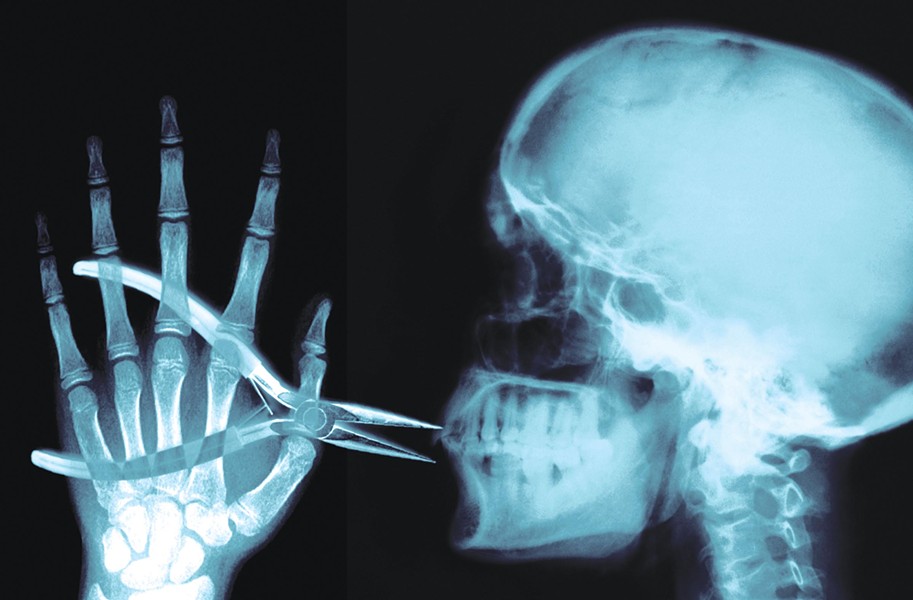 My whole adult life I've lived largely debt free. I've generally paid cashy money (Firefly speak) for my vehicles, which, therefore, have tended to be older, cheaper and finicky. (Although my motorcycles are pretty nice.)

I built my own house and paid for it as it slowly went up — seven years of nights, weekends and holidays, with my young family living beside it in a cheap mobile home that was also paid up front.

I've had health and dental insurance for 30 years and rarely used it.

Now, after some midlife dental work and a simple surgery — one long metal bracket and 12 screws, after my motorcycle crash in March (not alcohol-related, thank you very much) — I am in real debt for the first time just from having to pay what my health insurance won't.

I can't imagine having had major surgery or a disease and having to make car and house payments. My heart truly goes out to those of you in that situation.

There's plenty of blame to go around: Footing the bills for those without insurance, the cost of malpractice litigation, profiteering by providers and big pharmaceutical companies.

But it's really us — the Boomer generation. This huge demographic bulge (more than 70 million people) that's living longer and stronger thanks to exponential advances in medicine and much healthier lifestyles.

There just aren't enough young people to pay for it.

And we're just now hitting our prime retirement — look out Social Security — and health-problem years. This is going to get a lot worse and for a long time — basically until our grandchildren start making pretty good salaries.

You could see this coming a generation back. I wrote a column 21 years ago for the Times-Dispatch predicting this exact same crushing demographic problem if we didn't start encouraging risky living to even up the numbers:

We have become obsessed with living forever. And we're talking an eternity's worth of quality time, even though you may need a couple of open-heart surgeries and a pelvis replacement to keep you on track for that heart-lung machine that your great-grandchildren will be working their entire lives to pay for. …

We've got to turn this thing around before a monstrous plague does it for us or we all start shooting each other over who gets the last carrot muffin. … Anyone who smokes will get a tax break. Drinkers, too. Restaurants that serve greasy, artery-clogging food will be subsidized. Miss America will be fat. Pie eating (pies made with real butter!) will be an Olympic sport.

Nobody listened to me, of course. Instead, we just kept criminalizing unhealthy behavior like smoking, hard drinking and supersizing our meals. And all this nannyism comes from the same generation that shouted "sex, drugs and rock 'n' roll," "do your thing" and "hope I die before I get old!"

Watch: Instead of protesting wars and burning bras, the boomers will be staging health care rallies in Washington, their Hoverounds converging like Rolling Thunder to battle even the slightest rationing of treatment.

Bootleg medicine. You can see it coming, sure as sunrise.

Perhaps you remember Jose Hernandez from two summers ago. He was an immigrant from Mexico with little English who got busted for doing bootleg dentistry in Chesterfield County. Cashy money, small fees, no paperwork. In and out.

Perhaps you cringed when you read the T-D news reports at the time: "Hernandez performed both operations in a trailer behind his home."

I recall drilling out an abscessed molar when I was 21, before I had health insurance. Used a small drill bit to open the top of the tooth to release the pressure from the infection. No kidding. It was crazy, screamy pain and then … sweet relief. A trip to Virginia Commonwealth University's dental school sorted out the rest.

I bet money my friend Jon, an avid hunter and fisherman and retired construction worker, could've opened up my shoulder and screwed and plated my splintered collarbone. Really not much different than dressing out a deer. And it hurt plenty bad enough already because the bone was practically sticking out.

That idea — and my brand-new debt — got me thinking.

Let's form Renegade Health Care. We can work on each other. Just YouTube the procedure and follow along carefully.

Carpenters for the bone work. Plumbers for you-know-what. Jewelers and taxidermists for the fine work. Butchers and hunters would be in big demand, along with drug dealers. Seamstresses and quilters to sew things back up.

And then ditch diggers for all the screw ups. There are seven billion people on this earth. We have plenty of spares.

Not much crazier than living with a broken body because you can't afford to fix it, or suffering in debt just to stay alive. S

Contributor Mark Holmberg is a reporter for CBS-6 and former columnist for the Richmond Times-Dispatch.