Is artisan-made food a status symbol? 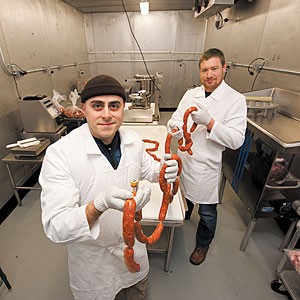 When you make sausage, you should never move backward. The only right way is forward, says sausage maker Chris Mattera. And though the reason is sanitation, it also applies to his business strategy — one that imagines house-made hot dogs at The Diamond as a defining goal.

Mattera and Brad Hemp are owners of SausageCraft, the region's first artisanal sausage wholesaler, and they hope to turn on its head that old adage about never wanting to see how sausage (or politics) is made. “We are a sausage company with nothing to hide,” Hemp says. “We're not Tyson, we're not Smithfield, and we don't want to be.” With an output of fewer than 200 pounds a day, “we are a food workshop, an atelier,” Mattera says — words not usually associated with sausage, typically lowbrow food with an unsophisticated image.

Their new business applies French and Italian techniques (Mattera is a Cordon Bleu culinary grad) to a dozen kinds of sausages aimed at chefs, specialty retailers and caterers. Longer range, the company will add bacon, cured meats, mousses and franks, but first the partners hope to clarify their craft and define the mission: quality, small scale, responsible sourcing and proper methods. Making sausage is not hard, Hemp says. “But making good sausage is difficult — doing it with care and passion. We're doing things other people aren't doing.”

That means producing custom orders for foods such as crAcpinette — pork meatballs studded with sweetbreads and truffles wrapped in caul fat. Or veal cipollata with pistachios and truffles. “There are many more flavors to sausage than hot and mild,” Mattera says, waxing over “brilliant-red paprikas from Hungary and Spain, this beautiful wild Mediterranean oregano, ground pepper from the south of Italy” — deliveries that are like presents as Mattera inhales them. Balancing salts and seasonings is the key to the craft and a selling point to chefs, who also are reminded of sausage's creative potential and low cost per portion compared with other meats. Demand seems to be growing and local menus are evidence of interest among chefs in the products, particularly ones that are locally prepared, lean and nitrite-free.

Informed diners want to know their food's origins — to be assured that “someone you can actually talk to is making it,” Hemp says. “We're sourcing meat from reputable places, and it's handled very carefully. It's not churned out by huge machines. You know where the stuff is coming from — it's not anonymous.” This is a foodie mantra, neatly timed to a downturn in giant agribusiness ranching, in which meat flavor and quality often are called into question by purists looking for a better way.

“We don't need a semi truck with thousands of pounds of anonymous meat,” Mattera says. “This is small enough that it's still real.” The goal is to be able to identify food from either end of the supply chain — from farm to processor to restaurant plate, with a name and an ethic attached.

An agriculture inspector watches every day of production in SausageCraft's 4,400-square-foot facility on Dabney Road, where Mattera stands in the 37-degree chilled processing room wearing insulated gloves beneath the rubber ones, working the “terrifyingly effective” grinder, the imported Spanish paddle mixer, the 40-quart vertical cutting mixer, the 100-pound stainless German stuffer, and then the Spanish semiautomatic string linker and labeler — arrayed in an always-forward line up. Hemp handles the business side, making calls and deliveries, running tastings, aligning with the region's artisanal foods purveyors and the chefs who increasingly buy from the business.

Bargaining power in a weak economy has meant cheaper space and equipment; the SausageCraft start-up is based on a shared passion for the product, a few personal loans and a sense that the market is ready for a personalized relationship with meat. This is, after all, sausage made to the sounds of the Decemberists or the Beatles or whatever Mattera is playing beneath his noise-canceling headphones and trademark hat.

“Food is the primary way I experience the world,” he says, “and it's a magnet, a communal experience that's less and less common.” For those who haven't eaten natural meats or artisan foodstuffs, “you might want to think about an upgrade.”