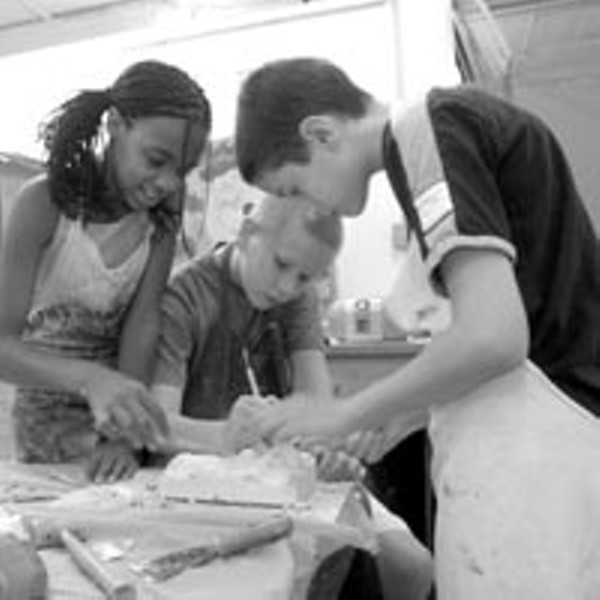 "When I lived in Chesterfield, I realized very quickly that there were a lot of people in the region that don't know who we are," Kennedy says. As a result, she's leading the organization through a name change and branding campaign. This month the Hand Workshop Arts Center will become the Visual Arts Center of Richmond.

The name change wasn't a snap decision. For the last five years the center has gone through a self-evaluation, as well as several studies that revealed that people in the counties just didn't know what it did; many took the name literally and thought it was a hand rehabilitation facility.

"When I say I work at the Hand Workshop, I would always get a puzzled look ... so I'd always have to explain what it was before explaining what I did," says Richard Harrington McCord, a ceramics teacher since the arts center's early days. "I think the idea was that the terminology came from the first part of the century and just didn't relate to people in the second half of the century."

McCord says there were a lot of discussions through the years about changing the name, and much resistance came from those who knew the center's purpose.

The Hand Workshop's tremendous growth also warranted a reevaluation of its name, Kennedy says. In just the last year, paid enrollment rose by more than 500 students. Attendance for unpaid after-school arts programs for city public-school students rose from 140 to 370. The center offers 100 scholarships for its summer programs and last year participated in a scholastic achievement contest that involved 1,500 young people.

On top of all that, the Hand Workshop's gallery curator, Ashley Kistler, has booked a steady flow of first-rate art exhibits both in its building and beyond. The Hand Workshop doesn't sell the art it exhibits. So from work by Norfolk-based on-the-street photographer Glen McClure to a group show of painters' responses to digital imagery, the center is free to push the envelope more than a traditional gallery can. Last year, Kistler employed photographer Wendy Ewald to work with Carver Elementary students in a project that resulted in large-scale banners that can still be found clinging to buildings throughout the Carver neighborhood.

Despite the growth, Kennedy says the organization has stuck to its mission: to offer community art classes, what she calls the center's "heart and soul."

"The driving energy has always been the creative process and getting people of all ages and backgrounds and skill levels to explore and create individual arts and crafts," Kennedy says. "We've simply expanded our programs to reach a wider audience."

In the '60s the Hand Workshop specialized in traditional crafts like pottery, jewelry and fiber. Today there's also animation, digital photography and creative writing. As a result of the expanded offerings, the Hand Workshop outgrew its building and raised $1.6 million to buy and renovate the adjacent building, which opened in April, doubling its classroom space.

Painting and drawing are the most popular classes and benefited from the expansion with new classrooms — "We think the nicest in town," Kennedy says. The center also added digital and darkroom photography studios, and fiber and glass studios.

McCord says the hope is that the new Visual Arts Center will hum with activity in all its new spaces. "Before the acquisition of this space and the renovating, we had the guilty pleasure of having all these looms for weaving and no place to put them, and the same thing goes for the jewelry-making facilities," which were crowded in the ceramics studio, McCord says. "Now we have a much better opportunity to attract students, at a higher caliber, and keeping them."

In early 2006, the arts center will enter phase two of its capital campaign, during which Kennedy hopes to raise $3 million to $4 million to renovate its main building and start an endowment.

But before that, the next step will be to "ratchet up" the center's image, she says. "We've operated on a shoestring budget for so many years, we just didn't have the money to do those things," she says. "This building has been a real sleeper — we've had terrible signage." Kennedy is adding new signs, banners, landscaping and better lighting. And the center is exploring the creation of a glass box through which it would project images of what's going on in the gallery. (A similar idea is planned for the Boulevard side of a soon-to-be expanded Virginia Museum of Fine Arts.)

"We're really in the heart of the city," Kennedy says, and "we hope that we'll actually look like an arts center now." S