Seed or Crumb? Residents Spar with Consultants and City on How to Memorialize the Devil's Half Acre 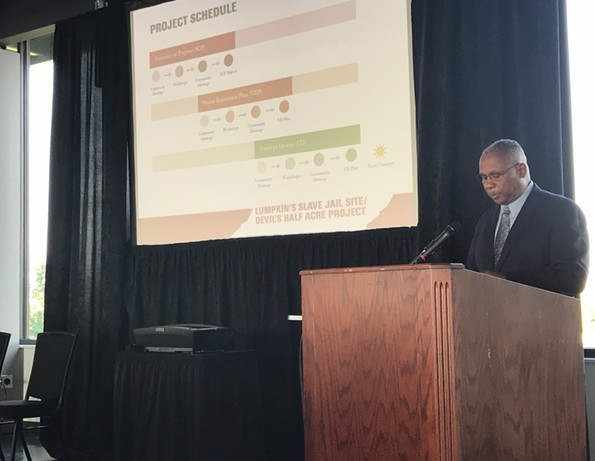 In a sunny event space in the Bon Secours Washington Redskins Training Center, a group of people tried to determine how to remember slavery, officially, in a city that had an outsized role in it.

"In kind of a twisted way, I'm glad to see this type of discussion," said Queen Nzinga, a retiree from Richmond Public Schools. "I'm old-school. We didn't talk about this when I was coming up. ... My history book by Virginius Dabney said the slaves were a happy lot — a happy lot."

Like other audience members Wednesday evening, Nzinga had concerns about the project taking shape. Who is telling the story? Who has told the story? Why is the scope not larger?

That last question is a big carryover from the first meeting on March 7.

Consultants hired by the city last year are leading the discussion about memorializing the site in Shockoe Bottom where slave trader Robert Lumpkin's jail once stood. The site is surrounded by land that was a hub for the slave trade, second in scope only to New Orleans, through which many thousands of Africans passed on their way to be sold. Now much of the land is parking lots and vacant buildings.

The consultants, Detroit-based SmithGroupJJR and a team of planners, are charged with building something on the jail site — a museum, a pavilion, a visitor center. They're not yet sure what. The project has appropriations of $11 million from the state and $8 million from the city so far.

But proponents of a larger 9-acre memorial park want something that commemorates and educates visitors about everything that transpired in that part of the city.

Consultant Albert C. Dobbins III asked audience members to see the project as a seed from which the site could eventually grow. They attempted to separate the consultants' purview over plans for the slave jail site from the surrounding lots, which are not owned by the city. City representatives were on hand to plug community input for Richmond 300, the just-announced intention to update the Master Plan for the whole city.

From some attendees, though, that "seed" was a crumb, thrown out to placate advocates. "It took almost 20 years for Maggie Walker to get a statue," said one woman. "And we had to fight for that. ... They wanted a tree more than they wanted a statue."

"I don't know what meeting you went to," said former City Councilor Marty Jewell to the consultants. "But the March 7th meeting I went to, there was overwhelming support to enlarge the scope of work, and not just focus on the Lumpkin's Jail. Let's not do the shake and bake that goes on here so often."

He also said there were more artifacts to uncover beneath any museum on the site proposed to house them.

John Moeser, a senior fellow for the University of Richmond's Bonner Center for Civic Engagement, wanted to know whether the city had acquired possession of the entire 9-acre space or at least gotten the right of first refusal since the last meeting.

Jeannie Welliver of the city's department of economic and community development said they had met with Clifford B. Porter, who represents the Loving family. The Lovings were not willing to sell or lease any parcels, she said. (Reports from 2013, however, indicate the Lovings considered selling if a baseball stadium were developed.)

Audience members suggested eminent domain, the seizing of land — with compensation — by the government for public use. Welliver issued a firm "no" to that.

"I want some type of assurances that the city ... that you are going to look into, from this date forward, protecting those areas that are important to me and people who look like me," Nzinga said. "Now I've seen eminent domain ... used to destroy Jackson Ward to put in an expressway through. So don't tell me you can't use eminent domain."

Dobbins told audience members that there were other ways to influence property sale and usage, like through zoning.

"I want to see this done before I leave this earth, and I want more than just talk, talk, talk," Nzinga said. "The day I roll down and see a 7-Eleven on the burial ground, you're gonna have some trouble."

Sid Simmons wanted the project to emphasize the agency of the white slaver owners in creating and perpetuating the system of slavery, a narrative he said had fallen by the wayside.

At the meeting, attended by about 125 people, the consultants presented a draft executive summary statement of purpose. Rev. Sylvester "Tee" Turner, a pastor of Pilgrim Baptist Church, offered a timeline of the project, which some audience members disputed later in the evening.

The consultants emphasized how they had incorporated community feedback into the process. For example, the title of the project was now "Lumpkin's Slave Jail Site - Devil's Half Acre Project," in response to concerns at the March meeting that they were memorializing a slaver and jailer, rather than enslaved people.

In addition to lumpkinsjail.org, they had parked devilshalfacre.org, which redirected to the former.

The consultant team also forged ahead with a survey of audience members about central questions of the project. Using electronic clickers for voting, a majority said they wanted the project to address the continuing legacy of enslavement, and they wanted a core message to be how the legacy still affects people's daily lives. A majority wanted the target audience to be families, especially black families. And a desire to attract regional and national tourism also emerged.

At the as-yet-unscheduled next meeting, the consultants said they would have a draft "visitor experience program" to present.

Some attendees were eager that the exhibits not shy from the realities of slavery or make its horrors less appalling for touristic purposes.

"There were children who were enslaved and there were children whose lives were padded by those enslaved children's service," said writer L.G. Parker. "I think you have to be very careful about doing this towards an audience, doing this to reproduce capital, because the whole issue is that people were ignored and treated like animals to produce the earliest capital, which is the same capital that has those statues on Monument Avenue shining year-round."

"I know you want to make money off of it," Parker said, "but no, just for once, just tell the story."