See What I Mean?

“Blindness” has a lot of unsettling collisions, and not just people bumping into things. 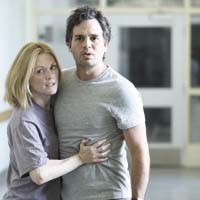 An affliction of sightlessness is spreading through a city. Stuff goes bump right in the middle of the day, re-enacted with a neat documentary realism. Drivers suddenly go blind and veer into oncoming traffic. Crowds panic during a manageable fire. Social commentary smashes against prurient disaster-movie tropes.
Most audiences will notice all of these jarring collisions, even though the latter is the least intended. “Blindness” was first a famous, serious novel by Portuguese author Jose Saramago, though in its current form the story seems more like a vehicle for high-concept entertainment. As it tries to be both, cross purposes ultimately cause it to stumble along with its characters.
The story seems a little random and even silly when translated to the big screen. In an unnamed city, a driver (Yusuke Iseya) stops in rush hour traffic because he's gone blind. A crowd gathers. Those he comes in contact with will eventually become the main characters and therefore blind, or perhaps the other way around. There's the man who helps him (Don McKellar, also the screenwriter), the blind man's wife (Yoshino Kimura), his eye doctor (Mark Ruffalo), and many others, all of whom eventually lose their sight. That is, except for one person: the doctor's wife (Julianne Moore), who valiantly follows her husband into the quarantine where the afflicted are sent so the authorities can get a handle on the spreading blindness.
Here's where book collides with movie, or at least where the nuances and implications don't translate so well. The sense that there's a lesson or two shuffling around among all the blind is already evident, but grows exponentially when the afflicted are forced into the quarantine zone, or as you might like to call it, the parable zone. Societal breakdown is swift since the frightened authorities leave the afflicted to their own devices rather than risk contracting the disease. The place quickly becomes one big toilet, literally.
The utter grossness of the situation gets explicitly worse as the quarantine's minimal standards of self-governance break down, but so does the movie's ability to find a point. Logic also falls apart as “Blindness” gropes for a reason to relentlessly demonstrate human degradation.
Moore's character, the only one who can see, becomes particularly troublesome when a couple of criminals (Gael Garcia Bernal and Maury Chaykin) declare a monarchy and begin demanding money and eventually sex in exchange for the limited rations. As their demands become more deranged, it becomes harder to believe that a sighted person couldn't handily outmaneuver them. No matter how ruthless and cunning they may be, they're blind and she's not. Denying the obvious might make sense in light of an unexpected moral or some other nugget of wisdom to be earned from the trouble, but none arrives.

“Blindness” is directed by Brazilian filmmaker Fernando Meirelles, and the creative fluidity he exhibited with the camera in “City of God” is constrained by commonplace writing that has us following the action as if it were intended to unfold in lurid episodes like a television series. Meirelles' talent is with the extreme, but “Blindness” is intent on generalization. The group of characters that make up its cross section of humanity are the archetypes of the sci-fi show, perfectly heterogeneous and perfectly bland. Attempts to liven things visually resort in clichAcs, like the constant blurring and whitening of the frame to give us a cinematic feel for the protagonists' plight. We get it, they're blind.
A respite for both character and audience occurs when a chance accident frees both from the confines of the quarantine, revealing a world engulfed in the disease. Meirelles is more himself on the outside, able to toy with archival footage and the open spaces of a city. He and screenwriter McKellar are unable to find any more meaning out there, however, and the movie gets more lost even as the characters find salvation in the remnants of their former lives. “Blindness” ends unsatisfactorily, with a random happy ending of sorts that jauntily lets the rest of the movie off the hook. It's as if the survivors simply made it through an allegory, with little to show besides a crazy story to tell at the next cocktail party. (R) 120 min.