Here, queer and a total shitkicker, the enigmatic Orville Peck keeps us guessing and swooning. 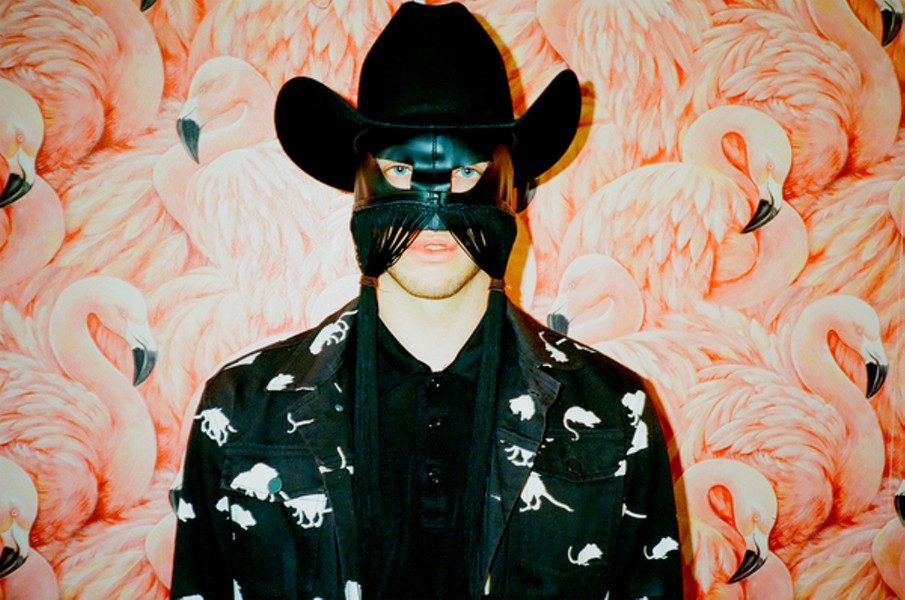 A shroud of mystery, and in this case a fringed mask, surrounds country-crooner Orville Peck.

Well before his Sub-Pop debut "Pony" dropped this March, the pre-released single "Big Sky" started a buzz about the masked man who sounds like the lovechild of Roy Orbison and Chris Isaak, wielding fiery songs about hustlers, road dogs and cinematic wide-open spaces, all of which sound so classic they simply couldn't be crafted in this era.

Throw in that you can't see who the heck it is doing all this and folks were smitten. Brooklyn Vegan thinks they've figured it out, most recently suggesting Peck is Daniel Pitout, drummer of Nu Sensae and singer of Eating Out. But honest to goodness, all of that seems irrelevant once you get lost in the whole enigma, a dreamy rabbit hole that's equal parts Lynchian lost highway and Lone Ranger.

Fresh out of soundcheck on the first night of a nearly sold-out string of dates kicking off in Boston, Peck chatted with Style by phone to share even more conspiracy theories and what it means to be an out queer cowboy in the mainstream.

Style Weekly: People are obsessed with everything from your aesthetic to your sound. Did you grow up with that kind of admiration for music or visual artists?

Orville Peck: Definitely. I grew up listening to all kinds of genres. I always loved film, art, and theater too. The stuff that really stuck with me was stuff I could really sink myself into, things like that were a full concept. The best example I can think of is David Bowie. He really inspired me when I was younger because not only did he have incredible songs and lyrics, but that was just the beginning. Then there was the look and legend he created for himself. For me that's always been more appealing than just been what I can really get behind as a fan of music, not at all that anything else is a negative. Those are things I like to do, to think about the whole aesthetic - the music, the visuals, the videos. That's me.

You have quite the variety of masks, who's your source?

I make them. I have about seventeen at this point. Just made two new ones last week. We keep joking that I'm keeping the fringe industry alive.

It seems fitting that you would have undergarments to match. Is that a thing?

(Laughs) I don't know. I'm not going to say yes or no to that. It's a pretty good guess.

Richmond has a soft spot for masked folks. Our hometown boys are GWAR. There's probably a little more spangle and less blood in your show?

I never knew that! That's really amazing. Well, I mean ... again, you never know but it's pretty safe to say.

Speaking of character, do you spend time as Orville each day before a show to get into it?

It's funny, I do a little bit of that but it's not really to get into a character per say. I just am Orville Peck. I grew up with a theatrical background and a musician in many different capacities, but with this project remind myself to try and keep a lot of sincerity on stage. The songs are quite personal to me and I wrote them with that to come across on the record, so it follows I would want to do that live too even though my band and I wear a lot of costumes and bring a country star show out of it. So, I just try to think back to what the songs mean to me before the show.

You spend a lot of time reading up on music history. What's your earliest or favorite musical memory?

The first big concert I saw was Sting with my parents. I was really young and I don't know what kind of impression that left (laughs). He did have a lot of bangers with The Police, so maybe it stuck with me more than I thought. I grew up in a household with lots of different music, lots of world music and I traveled a lot as a kid and was exposed to so many kinds that way. I think that had more of an effect on me than any concert I went to. I've always thought of music as having more parallels than we think. I like to take advantage of that.

As a self-proclaimed nomad and someone that's really into geography puzzles, what place has shaped your world the most?

Puzzles. That's true (laughs). I sing a lot about different places on the album and traveled so much at such a young age that I've never really felt settled. My fondest memories and nostalgia are scattered all over the world and there's a way that loneliness attaches to that. There's solitude in that. It's a lovely thing. Touring has been great because I've gotten to go to some of the places that I sing about and haven't been to in almost ten years. It's an amazing, full-circle experience.

Travelers tend to be excellent storytellers. In your opinion, what's the mark of a truly great storyteller?

The ability to keep the story sincere and personal while also maybe embellishing a little to add some flavor to it. Also, for a listener who has no connection to that story to be able to connect deeply to it. Patti Smith's 'Horses' had a profound effect on me when I was young, when I was 14. I'd listen to that thing a couple times a day. I remember her poetic lyrics about her sister and things she had experienced, even though those were not things we shared in common. Good art connects in those ways. When I listen to Patti Smith, I get really nostalgic. That's why I'm trying to do, but I'm not comparing myself to her (laughs).

From Patrick Haggerty and Lavender Country to k.d. lang, queer country isn't a new thing, but Orville Peck is getting quite a bit of attention for being a gay cowboy. What's your take on that?

It's funny because I set out to make a classic country album. Of course, it'll be unique because it's coming from my perspective.

I think the things that set the tone apart from country albums that I grew up listening to is there weren't many songs with men singing about other men. I guess when I think of good country music, I think of good stories. There's wit, wordplay, and humor and heartbreak. Those are things I can appreciate. That's why it's so easy to be a fan of it and why there's a resurgence of cowboy culture and country I think. And queer country, it's always been there. We all know the joke, there's only two things in Texas. Steers and queers! There's a really rich queer culture in country music. They go hand in hand for me.

Queer visibility and gay representation in mainstream music hasn't been vocal at all really. Through the seventies we got Bowie and Mercury, but comparatively there haven't been a ton of gay voices in music. People tend to thing country is conservative as a genre, so it follows that they think queer country is subversive or shocking. I just think of it as so differently. It's rebellious and exciting. Sure, there are conservative people who like country music, but I don't think as a genre it is. It's lacked diversity, but that's starting to change. Country music listeners want that, I think.

You mentioned being a big film fan, particularly of folks like David Lynch and John Waters. Lots of artists these days like Sharon Van Etten and Cactus Blossoms are partnering with Lynch. You're a big fan, so what song would you like to see worked into one of his works?

Hmmmmm. I don't think it exists yet. I'd probably want to write something after seeing his work. We'd have to have a chat about it. I would want to know where it's set first. He has such a unique tone and his settings always bring out such different characters.

You posted on Instagram saying folks should dress to impress for your shows, especially the drag queens. What would be most likely to catch your eye?

Drag queens and country go hand in hand. I've never meet a queen that doesn't want to do a country number. Drag or otherwise, I get excited when I see fringed shirts at my shows. I love that.

Well. (laughs). Some of the conspiracy theories are pretty cool so far. There was one going around that I'm Pete Davidson. I'm also an industry plant. Reddit is full of them. I'm not going to deny any of them, I think the more that pile up the better it gets.

Last question, I hear you guys are working on a cover for this show?

Ahhh, yes. Well, I'm not giving that away.

Orville Peck plays with Holy Roller and Liza and The Heart Takers on Sunday, April 28, at The Camel Doors open at 8 p.m. the show starts at 9 p.m. Tickets for the all-ages show cost $10.