The massive comic-book collection on the campus of VCU isn’t just one of Richmond’s best-kept secrets, it’s one of the largest in the country.

Xavier’s School for the Gifted
VCU’s league of comic artists and writers.

This office is cramped because of the three library carts and a table full of graphic novels waiting to be processed. Jackson is the curator of one of Richmond’s best-kept secrets. And as the lone archival assistant in charge of Virginia Commonwealth University’s comic collection at James Branch Cabell Library, she and a student assistant stand as the last defense against anarchy and this backlog of 8 tons of comic books.

Clocking in at more than 150,000 items, the university’s comic arts repository is one of the five largest public collections in the country. Cabell Library has more than 42,000 single comic books processed for public use as well as an extensive collection of graphic novels, memorabilia, editorial cartoons, reference materials and fan magazines.

The repository started in the ’70s after the library saved the private collection of famous illustrator Billy DeBeck from the dumpster. DeBeck, the creator of Jazz Age and Depression-era characters such as Barney Google and Snuffy Smith, left the funnies to his secretary when he died in 1942. About to move and no longer wanting to lug around her former boss’ personal effects, the secretary contacted VCU.

“Back then you’d say yes to anything they’d give you,” says Tom Inge, a comic expert and professor of English and humanities at Randolph-Macon College. A professor of almost 50 years, Inge recalls the dark ages of comic scholarship. He did some of the first academic work on comics, publishing papers in English literature journals because, he says, “There were no scholarly places to publish about comic books then.”

Inge taught at VCU for 11 years, and became the chairman of the English department. When he left in 1980, he donated a large portion of his comic collection to the university. “My kicking it off had a great effect on people donating,” he says. To this day the collection is made up almost entirely of donated books and memorabilia.

Jackson first came to the collection in 1996 as part of a work-study program. Back then the repository had only 4,000 comics. She jumped at the first chance to get her hands on the books. Aside from a brief stint in the private sector, Jackson has worked with the collection almost the entire time since. “It’s basically been mine since I first started working here,” Jackson says. On Christmas Day 2005 she became a full-time employee at the library. “Comics is my life,” she says, “and it’s great.”

A Hopewell native, Jackson grew up in the ’70s on a steady diet of Batman and Marmaduke. She fell out of love with comics briefly as a teenager. “I kind of went through a girly period. It was terrible,” the curator says. “I threw out my baseball cards and everything. It was bad.”

Jackson got back into comics in the late ’80s, reading postmodern realist titles such as “Watchmen,” “The Dark Knight Returns” and “The Sandman: The Doll’s House.”

When Jackson first got serious about reading comics the scene was overwhelmingly male-dominated. “Back in the day it was not a thing that girls did,” Jackson says. “They may have read ‘Archie.’ They were reading mainstream things that you could buy at a drugstore.”

Instead of hitting the local Barnes & Noble or ordering online, purchasing comic books 20-some years ago required entering an actual comic store. Jackson says her shopping trips often drew stares. “Back in the early ’90s when I walked into a comic book shop I was met with: ‘Eww, you’re a girl. Why are you here?’” she says. “Women weren’t as accepted.” She says she believes that the acknowledgement of comics as a literary form has helped break down the gender barrier. 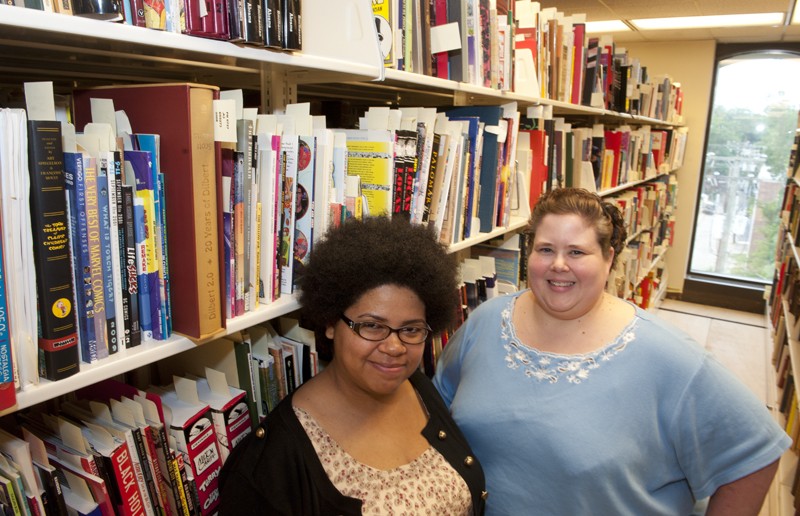 Jackson keeps one of the collection’s major contributors shrouded in secrecy.

Referred to only as the “Alaska donor,” this man alone has donated more than 7 tons of comic books to VCU. Because the comic staff consists of only Jackson and student worker Celina Williams, the donation has been sent gradually during the past few years to allow time to process it.

Because of the massive size of the collection, the Alaska donor ships his comics by freight. The first shipment weighed two tons and consisted of 29,500 pieces. Jackson and Williams are working to process their fourth shipment. Once that’s done, the donation will total 94,518 comics, and they are expecting another donation later this year.

A shipment arrived late one evening, just before the library closed. The regular movers had gone home for the day, so Williams and three others had to move the comics themselves. They moved an entire tractor-trailer full of comics using only handcarts that night.

The collection is known not only for its size, but also for many rare works. Items include 500 issues of “Mad Magazine” (including issue No. 1), 250 issues of “Heavy Metal” (including No. 1), and a comic book from the 1940 World’s Fair that features the first cover shared by Superman, Batman and Robin. Captain Marvel No. 1 and X-Men No. 4 are in the collection, as well as a Little Orphan Annie decoder pin, and a door decorated by DeBeck that features Barney Google and Spark Plug.

Cabell also holds 162 issues of the rare comic “PS, The Preventative Maintenance Monthly.” Focusing on teaching soldiers how to take care of military equipment properly, the publication’s real claim to fame is its illustrator: Will Eisner, revered by many as the godfather of modern comics. Eisner, better known for his work on “The Spirit” and “A Contract with God,” was hired by the U.S. Army to work on the publication in 1951.

Jackson borrowed the remaining 92 issues of Eisner’s run from the Army and digitized them. The entire run of “PS” under Eisner can be viewed free on the VCU Libraries website.

And a large donation of “PS” came by way of a regular patron. Every few months an older man from Tennessee came to Richmond to visit his son studying at the Medical College of Virginia. “He just said to me: ‘I have all these “PS Magazines” at home. Do you want them?’” Jackson recalls, expecting only a handful. The man returned a couple of months later with a rolling suitcase filled with original copies.