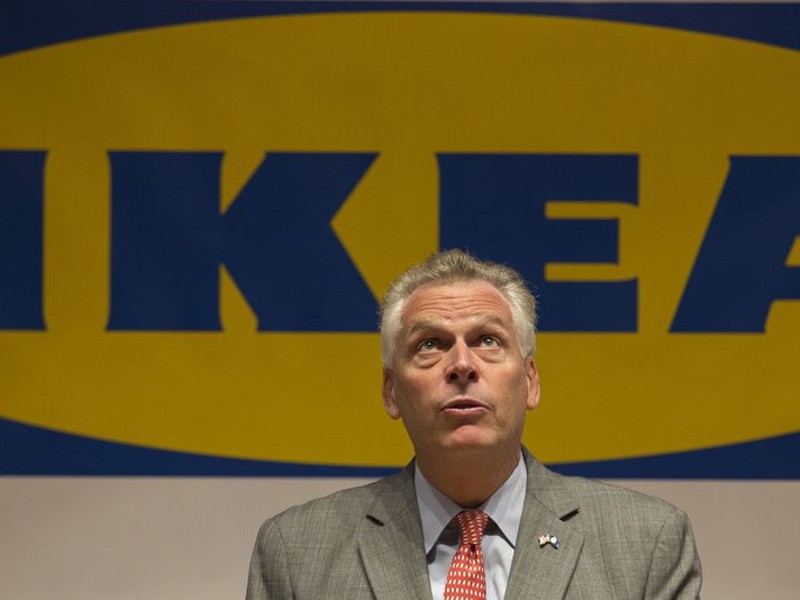 Bill Tiernan Virginia Governor Terry McAulliffe during his remarks at an announcement by Ikea Tuesday, June 21 for a proposal to build a store in Norfolk to open in 2018.

One day in March, Ikea representatives were in Norfolk talking with city officials about plans for the chain’s first Hampton Roads store. The negotiations were so secret the city had given them the code name “Project Neptune.”

Mayor Paul Fraim said he had someone for the group to meet, and in walked Gov. Terry McAuliffe.

“We had no idea he was going to be there,” recalled Annette Banks, Ikea’s national real estate manager.

The governor was in Norfolk that morning to help announce ADP LLC’s plan to bring 1,800 or more jobs to downtown.

McAuliffe told the Ikea group the state would make highway improvements that the company wanted before committing to build in Norfolk. Banks said that surprise encounter March 15 was a key to getting the deal done.

Ikea said Tuesday it plans to break ground in the spring and open a 331,000-square-foot Norfolk store in mid-2018. The mood during the announcement on the top floor of the Slover Library was jubilant.

“How much fun is this?” Fraim asked as he began his remarks.

He couldn’t resist a little bragging and a thinly veiled dig at Virginia Beach: “The retail universe in Hampton Roads has just tilted in favor of Norfolk.”

The deal followed years of on-and-off talks, months of negotiations and a last-minute snag that required the governor to intervene.

Ikea, a Swedish company known for its huge stores and affordable build-it-yourself furniture, has 380 locations worldwide. But just 42 are in the United States, with a 43rd set to open in Memphis, Tenn.

The only Virginia store is in Woodbridge, about a three-hour drive from Norfolk, and residents here have long pined for their own.

The new Ikea will be near Norfolk Premium Outlets, which broke ground this month and is set to open next year. Ikea’s store and 1,000 parking spaces will occupy about 19 acres of a 24-acre wooded plot owned by the city just west of Interstate 64 and north of Northampton Boulevard.

“The location is perfect for us,” said Joseph Roth, an Ikea spokesman.

The company says it likes highly visible spots near major highways in regions with at least 2 million people.

The 24-acre site has an assessed value of $12.2 million. Ikea will buy just under 20 acres for the fair market value of $6 million, said Chuck Rigney, the city’s director of development.

Once Ikea opens, the city will give the company up to $5 million in tax money generated by the store over 15 years, under a deal the City Council will vote on next week.

Rigney said Ikea is projected to generate $2.5 million a year in sales, meal and real estate tax revenue for the city, meaning Norfolk will come out ahead.

Meanwhile, McAuliffe said the state will spend $9.3 million on road improvements at I-64 and Northampton Boulevard.

The off-ramp from westbound I-64 will be widened from two to four lanes, with drivers able to go east toward the new outlets or west toward Ikea. The on-ramp to the westbound lanes will be extended. And the off-ramp from eastbound I-64 – which currently exits only onto eastbound Northampton Boulevard – will be reconfigured so drivers can go west to Ikea.

Rigney said the city estimates Ikea will spend about $75 million to improve the site and build the store, though Banks said the company is privately held and does not discuss such figures.

Ikea said construction will support about 500 jobs, and it will hire 250 people to work in the store.

Three years ago, when there were rumors about an Ikea at the former Lake Wright Golf Course, the company said it had no plans to come to Hampton Roads. But Banks said Ikea is always looking at new markets.

Roth added that a prime site like the one the city offered made it a good time to consider coming to Hampton Roads. Talks heated up about a year and a half ago, Rigney said.

Fraim said the deal was nearly done when, about 10 days ago, it was discovered there was a restriction on the title to the city-owned land.

A protective covenant restricting usage on some of it dated to a 1990s deal with USAA, which formerly had a regional office nearby, Rigney said.

Fraim said McAuliffe intervened through the state secretary of finance, Ric Brown, and got the restriction lifted over a weekend. Brown did not return a call seeking more details on his involvement.

On Tuesday, Fraim and other officials touted Ikea as the latest in a string of projects bringing new jobs and visitors to Norfolk.

Next year will mark the opening of Waterside District, Norfolk Premium Outlets and The Main, a downtown hotel and conference center. ADP and Movement Mortgage are bringing about 2,000 new jobs combined, not counting transferring employees.

Fraim, who is retiring and will leave office when Kenny Alexander is sworn in July 1, makes no secret he is racing for the finish line.

“Kenny, I have fired every bullet. You cannot top this,” the mayor said, looking toward his successor with a smile during Tuesday’s event.

Ikea agreed to move up the announcement so it could be held while Fraim was in office, Rigney said. And McAuliffe hinted he might be back in Norfolk before the end of the month.

So how many more deals can we expect by June 30?

This story originally ran on PilotOnline.com.