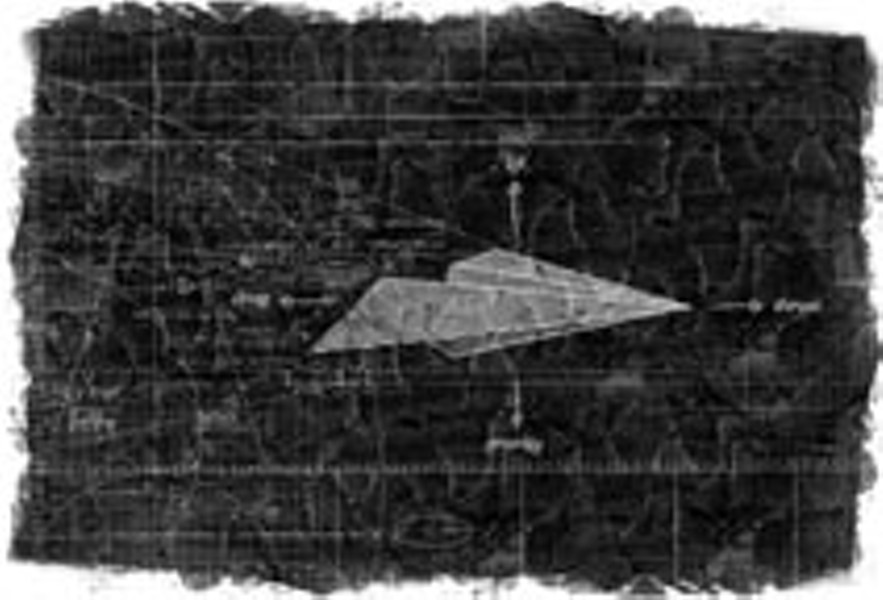 "What in the hell are you doing?" she said.

"I'm trying to find something," he answered.

"And you think I would put sugar in the underwear drawer?"

"I found this old thing," he said, holding the flashlight. Her eyes were closed. "It didn't have any batteries." His wife rolled over. He didn't know. Ever since he took an early retirement package from MidCentury Capital, he was getting himself sidetracked.

"Go back to wherever you came from."

"Yes, Don, the kitchen. That's where the sugar is."

He walked down the hall, stopping at the bathroom to grab his bridge of false teeth from off the sink. He'd gone out without them before. He wanted to remember them this time. He walked back into the kitchen, swinging the flashlight.

"Colonel Mustard in the kitchen with a flashlight," he said.

At seven, the son appeared and walked onto the porch, kicking the snow off his boots. He did not knock. He simply walked right in, got a beer from the fridge and sat at the kitchen table. It made Haskins furious, but he knew it was the way, the slow turn of the earth.

The son had walked in on his parents' argument. Haskins was hollering and his wife was yelling from the other room that Haskins was a stupid old man. Haskins would pretend not to hear her, wink at his son, and holler again, "Sugar."

His son told him that he was going to have to get dressed if he didn't want to miss the tipoff. Haskins clicked on the flashlight and pointed it into his son's face. He yelled out, "Sugar," for all to hear.

Haskins put his full attention on the piece of paper containing the rules for a paper airplane contest. There were places on the page to sign your name and write your telephone number. Contestants were supposed to fold the paper into an airplane, and at halftime, fly it with other entrants, attempting to land it closest to a small black circle at center court. The closest won a prize: a round-trip ticket to anywhere in the continental United States. This meant nothing to Haskins. If he wanted to go somewhere, he could go. But he was interested in the glory and imagined the ceremony at midcourt, and all the people applauding his design and intellect.

Haskins considered the page for the entire first quarter. His son drank beer and poured some whiskey on top from a flask he'd smuggled in.

In the second quarter Haskins built the folds into a perfectly constructed glider, a "wing" as it is known among paper-airplane engineers. He had torn a thumbnail moon at the rudder and angled the tips high for gradual lift. Enough thrust would gain it altitude and, when it hit its stall point, the nose would dip slightly down and the plane would float in a gradual roll. It should be no more difficult, he figured, than pitching a free throw. The variables swam in his head. Weight, thrust, drag and lift. He planned and remembered tricks with paper lost to him since his childhood.

The objective dictated the form, and the form dictated his strategy. The half wore on and he refined. His son gave him his own sheet of paper and Haskins went to work on a different design, one for closer range, if the first plane failed. It was always good to have a plan "B." If he won, it just might be the single greatest accomplishment of his life.

The digital clock wound down. The long-tossed ball from midcourt clanged off the rim with a collective sigh, and finally, the halftime buzzer blared. The players jogged off court and the band shut its yap. The lights went down into a single moving spot.

Then the voice over the loudspeaker: "Members of the audience are asked to prepare for this evening's 'Delta Dreams Come True Airplane Toss,' sponsored by Delta Airlines. 'Delta. Delta Takes You There.' Participants are asked to stay at their seats while engaging in the competition."

Haskins was up just as most others, already nudging his way closer to courtside. He was surprised at the level of interest, especially when his son had shown no interest whatsoever. At least two elbow fights had broken out on the way toward the edge of the mezzanine and one child had thrown his airplane out prematurely from the pit.

Haskins recognized no one. The clamoring students barked around him and the older people found each other, like they always do, and formed a tight corridor right up to the tape, the way cattle might if the shadow of the wolf was at hand.

Haskins found his place and took his stance. There was a comical silence and then the drum-roll began.

He stood next to a woman who had simply wadded her page into a ball. She spent the last few moments smashing it with nerves. The two-minute contest awaited the bell, and Haskins awaited his laurels. "O great unwashed masses," he thought. "O throng, to be among you, to have the great man pass while the greater forces of the universe worked to distract your eye from beauty. How I pity you!"

Haskins corrected his stance, boxing others out like a basketball player awaiting a rebound. He carved out the space and with his starchy tongue licked the paper to preserve the crisp folds of his craft.

The horn sounded. Haskins studied the sky, and thought, "Let it untangle itself."

Debris littered the court. The loudspeaker played a polka. After the initial ejaculation that spit up a thousandfold, Haskins had space, and then made an arc between his eye and the black mark at center, calculating his trajectory. Then, he took the delicate glider from under his wing and straightened his arm at length. In one graceful gesture, he held it out stiffly, bent it once to his reverent head, and kissed the nose of his plane. On the side of it he had written the words "White Heron."

Like a boy chasing butterflies, he twisted in a contour streamlined as the plane itself and flung it high toward its fulcrum arc.

If only he were Achilles and if the plane were a javelin ...

But no. It pulled an immediate left and hit the woman next to him right between the eyes. She had thrown her little ball already and was just getting embarrassed to be old when Haskins' attempt had nailed her solid in the forehead. The woman was stunned and clasped her hands to her head. Haskins had no time. He had neither the patience nor the wherewithal to force an apology. But he did have another plane to throw, by God, his plan "B," and he meant to throw it.

Haskins held plan "B" aloft, though this was no plane. It leaned more to the dimensions of a Chinese lantern. To make a good flying machine, one had only to think about the wind, think about it passing broad and narrow panels of skin. One had to have the desire, not merely to own the physical, but to allow the physical to play with what was not really there, to allow it to walk the aisles of a library stacked with unreadable books. It was an invention.

And it was Haskins' last stand.

As he prepared to set it upon the current, he could feel breath at the tips of his ears. Then, he felt a slap, hard on his back, that jarred the box and he let it go. It drifted a bit, hovered really, and then stopped, midair, midnothing, right in front of his face. Then he was going down, cowering beneath the blows delivered from the woman who had been pegged in the face by the White Heron.

The box that had fumbled from his hands, stuck in space. In a way it was doing as he had intended, only there didn't seem to be any air in the building to carry it. The woman drove her knee into his stomach, and as he fell, the paper box fell with him. To finish him off, she put her tennis shoe through his paper airplane. It melted like Icarus into the sea.

Haskins was sitting upright when his son found him. Security guards swung their sticks and eyed him like a terrorist. The winner was announced. A painted college boy came down to claim his prize, almost too drunk to walk. They gave the boy an enlarged replica of an airline ticket. He made an obscene gesture and galloped it off, up through the crowd.

Haskins, crestfallen, watched from his seat as the floor man swept all the blue airplanes to one end, thousands of pointed yet narrowly distinct souls heaped in piles and lofted into wide-mouthed Rubbermaid trash bins. To each a cargo, one name apiece and just so much litter now. No more than the popcorn and peanut shells beneath his feet, no more than the painted numbers on the stairs.

The game had begun again. The players ran from one end of the floor to another. The crowd cheered when the home team scored. Things had resumed a natural rhythm, and it did seem more important as the score narrowed, the teams fought for rebounds, and ran and ran and ran. But just before the final buzzer, a giant paper airplane loped out from the group of drunk, painted boys. They had made the replica prize ticket into a super-sized wing that soared like a pterodactyl. Play was disrupted and then halted altogether as it soared over the court. Guards went for the boy and the crowd was of two minds.

Haskins stood and roundly booed. And though his son assumed his abjuration was meant to chastise the boy and his friends, in reality, Haskins was roundly condemning the officers. His cries went under his hand, just as the objection he had always been meaning to utter against whatever forces drowned him in obscurity.

Yet, it must have confused his son when Haskins suddenly began to cheer when the boy eluded his assailants with a daredevil leap into the waiting hands of his friends. His supporters held the boy's body over their heads and passed him down toward the court where there would doubtless be more officials awaiting his descent. But for now it was only the spread-eagle body of the painted boy with the giant red "S" across his chest and belly.

Haskins howled. Gliding on, unabated, gentle as water, the wing turned beneath the field house dome and cast its shadow down upon them. S

Darren Morris, a 36-year-old St. Louis native, doesn't seem to be wrapped up in writing for fame and fortune. "I'm more compelled to get something published just to get it the hell off my desk," he says. His advice to fellow writers: "Keep your trade a secret."

When his brother told him about a Delta Airlines promotion at a Southwest Missouri State basketball game, the inspiration for "The Paper Airplane Engineer" was born.

"I write when I get the chance," Morris says. "I write mostly poems. That is my love. I could never sustain a novel. I write maybe five short stories a year." His poetry has been published in three issues of the American Poetry Review, Rattle and Bitter Oleander.

After graduating with a master of fine arts degree in poetry from Virginia Commonwealth University in 1998, Morris taught literature and composition at VCU, Virginia Union University and John Tyler Community College. Currently a technical writer/editor in the education field, he is also the new moderator for the James River Writers "Writing Show."

Since winning the Virginia Commission for the Fellowship in the Arts in 2000, Morris feels he has lived beneath its shadow. "You can't will your stories to get published," he says. "I just haven't crossed the badlands yet." — Valley Haggard