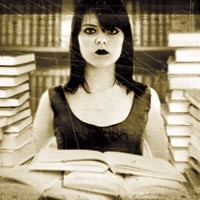 If you're wondering why I dropped out of high school and why I work at Dumb(arton) public library as a librarian's assistant for $7.35 an hour before taxes, and why I live with someone named Dane, who is 20 and whose blue tattoos are already beginning to fade, it's because I'm secretly in love with my older brother, Fred, who just a few weeks ago moved to Washington state to begin law school, and because I live in a town that resembles one in an instructional driving video, full of stately old Baptist churches and slow-to-change traffic lights and kids on Schwinns, where the sun is bright and the shade is very, very deep, and to a lesser extent, because my father is an accountant, our last name the first in the title of his firm: Peterson, Ellis & Stevens, and my mother is an elementary school teacher and hates my flamenco records and because I am beautiful and have a compelling inner life. You should have seen my wavy brown hair in the sunlight, in the late afternoon. Unfortunately, I've had to dye it black.

Oh, Ideal Reader, I've almost despaired of finding you. And yet, even as I grow frustrated, I know this process is designed especially to frustrate me, teach me patience, that even this despair is necessary. In short, I have faith, remembering what my mother said when I asked her, "How come Fred is the best brother in the world? Out of the million possible combinations of you and Dad, how did I get the perfect one?" He'd just left for law school that morning and I was kind of hoping I'd never see him again.

"It shows how much God loves you. He puts just what you need right in your way," she said. Mom's logic is often careless; she has a tendency to lump things together, whole races and classes, wildly different musical genres like flamenco and rap, but this time the lumping was direct and intentional. She really meant that blessings and obstacles are one and the same.

Nostalgic, Mom insisted we watch some old home movies then. "You two always had such a special relationship," she sighed as, on-screen, Fred and I shimmied to "Sugar Shack" by Jimmy Gilmer and the Fireballs. As usual, the sun shone bright on our back yard; some splash of water visibly evaporated on the porch cement. I was 3 and he was 9. My diaper drooping ominously, I did a series of toddlers' squat-jumps, never quite lifting off. Fred rolled his head around as though his neck had snapped, sidled toward my 3-year-old self, tried to bump his big hip against my tiny one and knocked me over, out of the frame. Perhaps it was that instant I literally fell in love. "You can understand why I've gotta get back to that Sugar Shack ..." sang Jimmy Gilmer.

You can understand why I had to get up, had to leave right then. Because if I stayed in our den any longer, watching us, I'd end up stealing a cop car and driving to Washington state. So I took His Name in vain for emphasis, "God," made a teenager's excuse, "I hate these family histories," and went out to pick up a friend, get drunk.

Actually, that's how I met Dane, the dip-spitting image of Fred. They have the same height, same relative breadth of chest, same boxy jaw and oblong nose, same black-brown hair and eyes: a physical resemblance so close it shouted sweet providence right across the parking lot. I'd never have believed it before I saw him that evening at The Stop N' Go, a local place known for lax ID practices. Yes, you might see God in this one too, leading me in the convoluted paths of righteousness, putting what I need in my way.

"Don't you think it's weird how he looks kind of like your brother?" said my friend Emily. We'd bought some beer, gone to park by the river. We were all leaning against the bumper of Dane's aging Camaro as the night grew darker, all clouded over and cool for August, what Fred calls "Für Elise" weather.

"I know, right?" I leaned over to Dane, looked into his always-twilit eyes, gave him a kiss that lasted about half an hour. When his tongue flicked mine, I felt my life start to climb clear of the sordid. I resolved to comfort myself with Fred's Camaro-and-forklift-driving double. (Yes, it's true, beyond the physical, their resemblance drops off like a continental shelf.)

It's strange, though. Everybody thinks I've lost my faith, because I'm living with a guy and I've dyed my hair black and wear black clothes all the time and don't speak to my parents anymore. Well, I couldn't go on wearing those capri pants, those capped-sleeve sweaters and pearls, my old-life standards. The wives of clients of Peterson, Ellis & Stevens, those bridge-club types, kept touching me on the arm, saying, "Dear, it's 10 o'clock. Why in heaven aren't you in school?" Which distressed and depressed me. No, I had to buy these hemless skirts and Sisters of Mercy T-shirts; I had to don protective coloring. Now they eye me in my Goth get-up and kind of nod to themselves, and have the reference desk lady show them to Oprah's selections. And because now my parents are convinced I'm merely going through a phase, they're able to tell themselves I'll grow out of it, and I think they rest easier at night. But really I'm more devout than I've ever been. It's terrible to be so misunderstood when you're making a probably doomed effort to do the right thing.

That's why I had to tell you. Because I'm so damn lonely. I've got to have someone understand.

I think of this job as my post; I'm keeping my eyes peeled for you. I need to know, must know, that this little missive falls into the right hands.

Here I am in the library, on an ordinary day. From my post, I can see everybody coming in. It's like a casting call. Everybody's auditioning to be you.

Presently a mother and a little boy step up to the desk. "C'mon, Ben-o," she whines with a mother's gentleness and a mother's exasperation, so the boy lifts an armload of those big-print books about venomous creatures toward me. I liked to read them when I was a kid, too. When I open the cover to scan "All About Vipers," the pages are still crenellated from when, eight or nine years ago, I left it outside overnight on the AC unit and it rained. Now the snakes really seem to be slithering across the pages. I smile at the kid. When you're young, you're eager to learn about wild animals, tornadoes, plagues and such, imagining those dangers to be relevant, but when you're older, you've got your work cut out for you just keeping out of all the invisible nets, like sacrilege, like incest taboos, like parental disappointment. The kid just looks at me like I'm weird, looks away. It's the clothes and the hair.

Next, I see Lawrence P—— pushing through the turnstile by the entrance and heading my way, his hands in his pockets, a single book pressed between his wrist and hip. He has black curly hair he's let grow into an Afro. Ever since I gained the sophistication to identify his affectations, it has galled and haunted me that I ever lacked it. Because three years ago when I was 13 and he was 15, he played me a song on his guitar in the park. When he'd finished, he looked in my eyes and said, "I wrote it for you." Honestly moved, I told him that I thought the song was very beautiful. No, I'd never heard "Shelter From the Storm" before. Sometimes I feel flattered that Lawrence felt the need to impress me at all, but mostly I just feel dread and embarrassment at the sight of him. At least I never let him touch me. Back then I was keeping myself pure for Fred, if in the event of nuclear apocalypse we were the only young people to survive. Because like many Republicans, my parents never grew tired of the Cold War, and we still have a fully stocked shelter in the basement.

Lawrence P—— slides the book across the counter. I have known him for so long, not well as just so long, that his mind is exposed to me like an ant farm. The ants aren't moving very quickly. It's only midmorning, but there's already ketchup on his sleeve.

"Why don't you get another book this month?" I ask him. You'll love this: According to library records, he's renewed this one about 36 times.

He's been waiting so long to be asked. He lets loose a big, intense bout of scowling eye contact, and then he says, "It's the only novel." Lawrence thinks he's Kerouac's ideal reader, and maybe he is. He's certainly not mine.

I give him my shallow-yet-lofty nod, a quick editorial dip — when you work with the public, you develop a repertoire — and hand "On the Road" back to him. He slouches away to accost girls in the park, to relive the events of the last few moments in his bathroom mirror.

I would never slip these pages into "On the Road"; I know that much. You, my Ideal Reader, will dislike Kerouac and for the same reasons I do.

See, ever since I took this job, I've been thinking about which book to tuck my message in. Let me go on record here: There is no pleasure more exquisite — not even watching Fred squint to concentrate on the law school applications that will bear him inevitably away, his familiar, handsome face going utterly remote while my heart screams no, and even louder, yes — than finding some token of the last reader in a book you've really wanted. That receipt for a cheeseburger no onions dated February 3rd; that scrawled line of a never-finished poem; that yellowed prayer card with the Virgin in orans must be life's greatest pleasure. To be touched by that umbilicus is truly to graze with one's life the mystery at the heart of the universe. And so I've decided to put these pages into a concise history of the big bang, way down at the end of memory lane, the history aisle. The original physical blast; the very beginning of the thing. It isn't a perfect choice, but I know as well as anyone that sometimes we must settle with approximations of the perfect.

Finally, my Reader, some afternoon you walk in. Your step is jaunty, alive with the quest. Your sandals thwack against your heels, but there is nothing flirty about their thick straps. So I leave my post at the desk, guided by a mysterious recognition that envelops us both like a mutual fog. I trail you down the aisle, reaching up to run my fingers along the spines. We're walking through history: past Vietnam, past World War II, the first Great War and on to Charlemagne and the silkworm trade and the origin of the universe. The tragedies, the epochs, the embarrassments blur together. The overhead light ceases its buzzing, grows utterly still, incandescent, as you pause and turn around. The length of your biceps that comes into view suggests you can do a push-up without too much grief. Skin beginning to wizen. A permanent tan from all those years without sunscreen. You're an older, social-worker type. You understand that I can't help it, but don't you want to know how it all got started? Yes, you do. Your frizzy hair fans out from your face, which like the face of God, like the face of Fred in a moment of terrible trespass and terrible ecstasy, I never see, can hardly even imagine. S