An indistinct first act belies a strong finish in Chamberlayne Actors Theatre's “All My Sons.” 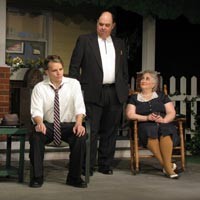 I was concerned when the lights went down on the first act of Chamberlayne Actors Theatre's “All My Sons.” Though the play won a Tony Award for Arthur Miller back in 1947, its early scenes have the earmarks of a mopey family drama, made even drearier by a couple of inelegant performances.

My worries were premature. Midway through the second act, the play turns into a taut psychological thriller of sorts and, as momentum builds to a devastating conclusion, the actors' performances grow more focused. While it still suffers a rough spot or two, the final result is gripping, surprising and ultimately very satisfying.

“Sons” is set a few years after World War II. A successful factory owner, Joe Keller (Woody Robertson Jr.), still mourns his son Larry, whose plane went down in battle. Joe's wife, Kate (Jacqueline Jones), holds fast to delusions that Larry will return alive while their other son, Chris (Dean Knight), plans to move on with his life, mustering up the courage to propose to Larry's old girlfriend, Ann (Emma Mason).

The show's slight meander ends with the arrival of Ann's brother, George, played with a barely contained ferocity by Matt Hackman. George's accusations about wartime crimes spur confrontations and suddenly Knight's Chris, whose testament of love to Ann had been rushed and unconvincing, grows a spine. Robertson's one-note portrayal of Joe gains depth and Mason's Ann goes from skittish to composed.

Kate's waver from loving matriarch to fearful wife makes for an imposing acting challenge but Jones is magnificent in the role. As the peppy beauty that George pines for, Debbie Walton also makes a fine impression in her few short scenes. Set designer Lin Heath has constructed an evocative middle-American back yard and costume designers Charlotte Scharf and Betty Williams complete the post-war picture nicely. In the end, this “Sons” does shine. S