The country's divisions peel back constitutional history: A wall at Tredegar and the debate over states' rights. 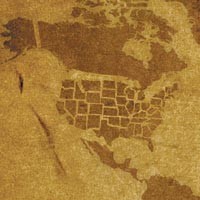 Walls divide, but perhaps no wall in Richmond marks such significant division as the short, curved length of flimsy glass, aluminum and wood that stands at the end of the American Civil War Center at Historic Tredegar's museum exhibit hall.

A patch quilt of customized yellow Post-it notes lies beneath a question asking visitors if they are most loyal to their nation or to their state. Among the replies, one declares: “We are loyal to our Constitution, NOT OBAMANATION!”

This wall was never meant to divide.

Since the museum opened three years ago, the wall has posed a number of simple but thought-provoking questions meant to provide insight into the legacy of the Civil War. A simple partition that marks the end of the center's tour, it's been filled with scrawled Post-it messages providing gentle critiques of the museum, or gratitude for its thoughtful handling of a sensitive time in American history.

Sometimes, predictably, the wall has served as an anonymous forum for racist rants, but rarely has it served as the sort of bellwether — or psychiatrist's couch — for the nation's angst that it's become in recent months. With popular opinion polls shifting away from President Barack Obama and deep polarization about government policy, the messages on the Tredegar wall now reflect that rift. They also may show a renewed interest in once-resolved constitutional questions of states' rights.

What the wall's divisions represent is difficult to determine at first blush. The museum's director, Christy Coleman, says that on most weeks the posts reveal visitors as proud Americans, even though there's a new consistency in the sometimes-angry rants about Obama and federal intrusion in private or state-level affairs.

“There's definitely something going on here,” Coleman says of the increasingly frequent assertion of states' rights.

Roughly two-thirds of Tredegar visitor Post-its last week swore loyalty to a state before the nation.

“Loyalty to Virginia,” declares bold, deliberate letters on another note.

Two of the city's most pre-eminent historical scholars say the current debate — even as it plays out in sometimes racially charged zingers on the wall at Tredegar — is rooted in constitutional history.

Woody Holton, a University of Richmond Revolutionary War-era scholar, and Edward Ayers, who is president of the university and a historian focused on the Civil War era — say the national debate, its tone and the president at the center of its vortex, have parallels in this country's past struggles.

“I think the current anti-government sentiment really does resemble the anti-government sentiment that resulted in succession in 1861,” Holton says. He suggests that both moments in time fundamentally boil down to the frustration of insiders who suddenly have become outsiders. “What these two movements have in common is that the two groups who were running the place aren't running the place anymore,” he says, “and they're pissed off.”

Ayers concedes that central point, though he reserves doubts about the Civil War as the best comparison, instead finding better parallels in the civil rights movement of the 1960s.

“Because the Civil War decided secession, it doesn't mean it decided the boundary between the [federal government] and the states on all issues,” Ayers says. He views today's dissent shadowing Civil War-era dissent as well as civil rights-era establishment resistance. He says all these movements revolve around a perceived loss of power by those seeking to keep “power close to home where it can be controlled by those who have it.”

Holton also sees shadows of the 1960s, but thinks modern events have taken an important accelerating turn that best resembles the politics of the 19th century. Rather than being a bottom-up movement like civil rights or anti-war protests of the 1960s, he says, this modern movement — like its 1860s predecessor — boasts supporters in government leadership posts who threaten to work within the system to revolt against it.

Last month, Minnesota Gov. Tim Pawlenty thrust himself into the national spotlight as the latest governor threatening to challenge national health-care reform by invoking the 10th Amendment in the Bill of Rights. Texas Gov. Rick Perry spoke similarly this past spring, even flirting with talk of secession, which he mainly acknowledged by saying it was a remote option.

Some state legislatures in places such as Oklahoma have considered sovereignty resolutions that cite the 10th Amendment, which deems powers not expressly granted to the national government or prohibited to the states by the Constitution are “reserved to the States respectively, or to the people.”

Local talk radio station WRVA 1140-AM has picked up the local banner; its hosts have urged listeners and others to sign the station's online petition calling on Virginia's General Assembly to pass a resolution “expressing support” for the 10th Amendment.

Holton says he's intrigued by the parallels between Obama and Abraham Lincoln, both presidents who led opposition parties to victory against a strong establishment. “The only other time I can think of people talking about secession after an election is Lincoln,” Holton says.

During the Civil War, Holton says, it was Southern-dominated politics that held sway in Washington — a condition dating almost to the nation's inception. Many of the country's presidents to that point came from the South and most of them were from Virginia, the region's philosophical brain trust.

“The South pretty much ran the country through the 1860s,” Holton says. “The presidents were either from the South or like [President James] Buchanan, sympathetic to the South, then suddenly this guy Lincoln got elected and they were not in charge anymore.”

To Holton's mind, the recent proliferation of tea parties, made up mostly of conservative protestors upset at Obama's policies, offers a case in point: “The ‘teabaggers’ — people going to the [modern] tea parties … they were running the government a year ago,” he says.

Ayers departs with Holton's assertions that the strongest parallels to now are found in 1776 or 1861. Instead, Ayers looks to that other pivotal moment in U.S. history, and to a group that, like the Civil War-era Southern politicians, had lost its place at the head of the table in Washington.

“The greatest parallel is [with] the anti-civil rights movement,” Ayers says, referring to states-rights assertions made during this period by Southern states resistant to integration, though he swiftly dismisses the race issue in that earlier fight as irrelevant here. “There are big differences,” he says, “such as that [civil] rights were contained in the 14th Amendment.”

Like leaders of Southern states in the 1960s, there's a philosophical push to retreat behind state borders to defend against the invocation of federal civil protections. Then it was civil rights, now it's health care.

Also interesting to Holton, whose scholarship on the foundations of the Constitution has focused on the precarious balance struck between the often-aristocratic Founding Fathers and the rabble-rousing pro-democracy common folks, is that the imagery of the current debate has taken a decidedly 18th-century tone. The anti-Obama crowd has adopted flags and symbols, such as the “Don't Tread on Me” Gadsden flag.

“They'd like to be compared to the Revolution,” Holton says, reluctantly conceding that “they do have something in common, and that's imagined tyranny.”

In many ways, Revolutionary leaders such as Patrick Henry and John Adams, preaching against the British Parliament's Stamp Act, bore some shadow of resemblance to the messages being preached today by Sean Hannity and Rush Limbaugh, who claim taxpayers are shouldering the yoke of unfair taxes meant to subsidize those unwilling to carry their own load. And that's not to mention radio host Glenn Beck's “inspired by Thomas Paine” version of “Common Sense: The Case against an Out-of-Control Government,” which hit No. 1 on The New York Times bestseller list.

But just as no new tax increases have yet landed, albatrosslike, around the U.S. taxpayer's neck, Adams and Henry were similarly faced with the fact that the colonists' tax burden was a scant percentage of what their fellow citizens in London paid.

“Would it really have killed us to pay the Stamp Act?” Holton asks, suggesting that it likely wouldn't have. But while Adams and Henry could rally round “taxation without representation,” he says, that's far from the case today: “That's what makes them different. It's a contradiction within the movement that they haven't confronted because they claim they are the people.”

And that's what adds to the similarities between this group and past groups that have eventually rebelled against authority — and why in Holton's opinion the 20th-century civil rights movement is less analogous. “There's a big difference between disenfranchisement and un-enfranchisement,” Holton says, noting that civil rights protesters were seeking something they'd never known before, while colonial- and Civil War-era rebels sought to reaffirm what they saw as their already existent, but threatened, rights as citizens.

“It has in common with it this sense of deprivation, this sense that we were running the table this time last year and now we're under the table,” Holton says, though he believes big words — and perhaps some interesting Supreme Court cases — are about as far as the current debate will go.

In fact, it's the wall at Tredegar — the small monument bearing witness to the current divisions — that likely serves as the best proof that the Union is safe.

“Slavery was mostly a Southern phenomenon,” Holton says, “whereas racism … is not uniquely Southern.”

Ayers also agrees that the Union is safe, though for him it's the spotlight issue of state versus federal authority and not racism that lacks the regional focus necessary to bring about civil war.

“You cannot actually imagine a state seceding now,” Ayers says. “All of those things the Civil War did settle: one nation, indivisible.”

Standing on the other side of Tredegar wall, where the museum's tour begins, Coleman reverently runs her finger over a laminated display copy of the U.S. Constitution. This founding document first united the country. Its inherent flaws nearly tore the country apart just a few generations later.

“If you don't get the meat of this,” Coleman says of the Constitution, the exhibit that prefaces everything else the museum attempts to teach about a nation divided and then reunited, “we're lost.”