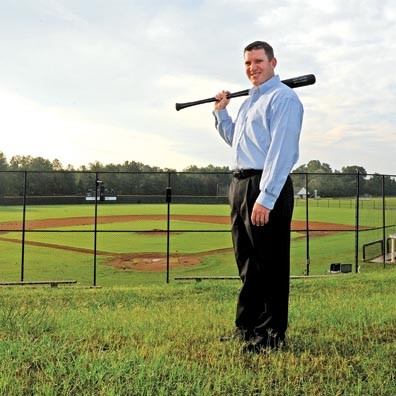 Soon after Sean Ryan graduated from college in the late ’90s, his parents’ neighborhood in Atlanta was ripped apart by a tornado. The American Red Cross was there immediately with a ham sandwich.

“It was not a good sandwich,” Ryan recalls, “but it sure tasted great that day ... and I saw the impact of an organization like that in disaster areas.”

Ryan, who just finished his third year as chairman of the local Salvation Army, works as an account executive at the Hodges Partnership, a full-service public relations company that also occasionally works with nonprofits.

Outside of work, the former University of Richmond baseball player is known as a college baseball guru. He started the college baseball website CollegeBaseballInsider.com, considered a must-stop by college coaches and he’s regularly interviewed on national sports shows such as “The Tim Brando Show” on Sporting News Radio.

Ryan also is a well-respected high-school coach who led Benedictine College Preparatory to a state championship last year while encouraging his players to get involved with local charities. “You have to lead by example,” he says. “I’m trying to instill that in them at an earlier age than when I got it.”

He’s already seeing it pay off in former players. “It touched me this year when I had a student, who is now playing baseball at VCU, calling me out of the blue to institute something at the Salvation Army through his fraternity,” he says.

If that weren’t enough, Ryan has a 3-year-old son with Down syndrome, Benjamin, who’s inspired him to lend his talents as a public-relations whiz and former journalist to the board of the Down Syndrome Association of Greater Richmond.