The idea that we're in a golden age of television may be up for debate, but New Yorker magazine television critic Emily Nussbaum is fairly certain that we are.

The 47-year-old journalist loves her job at one of the country's most prestigious magazines, and she spoke about it with Style Weekly in advance of her Nov. 6 talk at the University of Richmond, "From 'I Love Lucy' to 'Breaking Bad': How Ambitious Modern Television Rebelled Against Formula by Exploding It."

Nussbaum says that she'll touch on the newly radicalized relationship between television and its audience that has been spurred by ever-evolving new technologies — and let's face it, some pretty kick-ass new shows.

Style: Has the role of the TV critic changed much?

Nussbaum: Definitely. My background is very online. ... There was a big community of people writing anonymously on a website called "Television Without Pity." That was exciting for me when I discovered it. Television used to be this isolating event that poured in, you couldn't stop it. ... The growth of the Internet and simultaneous rise of the kinds of television worth talking about has really lit up a big national conversation among people who are passionate about TV. As a result, there's been this wave of writing about television which ranges from fan sites to official forums, long essays and recaps. I really enjoy talking to people on Twitter. I feel very lucky because I'm writing for a magazine that allows me to write at length, and more essayistic.

So how exactly do you watch stuff?

It seems like every year there's a new change. More recently, people are watching on Netflix in binges. Personally, I have a large-screen TV and I watch on that. But I also get screeners and I watch them on my computer at work, or old things on my iPhone actually, Netflix or Hulu while lying in bed with my headphones on. For shows that are highly visual, I try to watch on TV. But really, I try to watch things the way people watch them. I'm not a videophile; I'm not a stickler for beautiful production. But I think one of the more exciting things lately is the entrance of movie directors onto TV, including Jane Campion and lots of other people. A lot of my favorite shows look junky. "Buffy" was a big show for me, and it's not cinematic.

Does your opinion change much after a piece has been printed?

Oh, yeah [laughs]. I think one of the hardest things about television criticism is figuring out when to weigh in. Sometimes you want to weigh in at the beginning of season because it's part of the publicity cycle — but there's not that much to say about a new show. Sometimes you want to draw attention to something you think is good. But I think sometimes the best time to weigh in is two-thirds through a season, because there's more to talk about and you won't spoil things. And there's also something to be said about talking about the whole show once the personality is there. I wrote a piece about "Mad Men" that I think still holds up, but at the point I wrote it, I was frustrated and it was a critical piece about the character of Don [Draper]. But I really loved the last four episodes after that [laughs]. So it happens all the time.

I've been trying to figure out ways to write about changing my mind. The complexity of writing about television, unlike a book or movie, is it's a serial form of storytelling taking place over years — the audience goes up and down. It's kind of like talking about a live performance while it's happening.

What are the best and worst trends right now?

The best trends are always the ones that surprise me. "Enlightened," which was tragically canceled, was one of my favorite new shows. "Orange Is the New Black." Things I find exciting are these dark, anti-hero dramas. As well as different voices and shows that have a kind of humane quality, which is true of "Enlightened." One of the historical difficulties of TV was having to appeal to everyone and getting bland. ... The worst trend is one I participate in, tweeting while watching television. It's a visual medium and it's disturbing to think powerful shows will get broken up. That one I'm worried about in a slightly old-fogey way.

Seemed like there was a breakdown between people who loved "Girls" and "Enlightened," based maybe on age ...

The idea that they're in competition, that drives me crazy. Why are you comparing those shows — why not "Girls" to "Louie"? I get frustrated when people think shows about women need to be compared to other shows about women. Those shows seem to have a tremendous amount in common. They both are indie-movie inflected and have an alienating feel that shakes up a person. 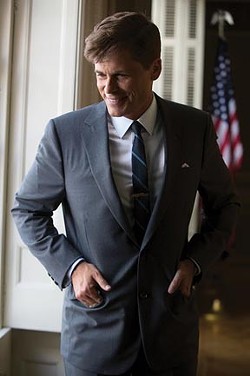 I understand what you're saying. A lot of people were annoyed by ["Girls"] and have issues with it. But its willingness to annoy people is, to me, part of its charm. My response is basically: I'm happy "Girls" got attention. Normally small, strange HBO comedies made by women did not. Even though it became a divisive, exhausting social debate, good issues were raised. ... However the "voice of a generation" thing is absolutely bat-shit crazy. The character when she said that was high on opium and trying to manipulate her parents into giving her money. The debate then became is Lena Dunham the voice of a generation? ... I think that show blew open doors in terms of styles of comedies — that show and "Louie" were really important to me in ways of presenting memoir and comedy and different bodies on TV. Those are the ones that are paired in my head. What do you think about "Louie"?

I haven't watched it since he was on HBO, mostly for childish reasons. He wouldn't do an interview with Style because his comedy show already was sold out.

[Laughs] Oh that's funny. You have a grudge against Louis. S

Emily Nussbaum will discuss the golden age of television at the Jepson Leadership Forum on Nov. 6 at 7 p.m. at the University of Richmond's Jepson Alumni Center. The event is free, but registration is required at jepson.richmond.edu/forum.