Screen It and They Will Come

The new Goochland Drive-in brings outdoor movies back to the region. 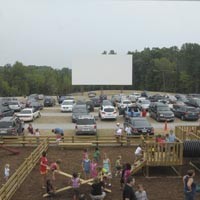 John Heidel will be the first to tell you that it hasn't been easy. “I can understand now why you don't see too many drive-ins in the 21st century,” he says.

It's four days before the big grand opening Aug. 28, and the 39-year-old Goochland County resident works “feverishly” to complete all the prep work needed to reproduce what he calls “the outdoor movie experience.” After years of daydreaming, preparation and sweat, the new Goochland Drive-In Theater will finally open on 10 acres off of Old Fredericksburg Road in Hadensville. “Family friendly” is the buzzword and the first offering, running till Sept. 3, is indeed that: “G-Force” paired with “GI Joe.”

Heidel and his wife, Katherine, started a successful home-delivery dry cleaning business, sold it for big bucks a couple of years ago, and are in the process of sinking their nest egg into a lifelong dream. The couple wants to bring an actual, honest-to-goodness drive-in movie theater back to the Richmond metro area.

They'd planned to open the gates to their theater in the beginning of the summer, but there were some snags. One was that they had to buy a new screen, a 40- by 80-foot white vinyl monster. “There's a place that still makes them,” John Heidel says, in a voice that still sounds kind of amazed.

Heidel thinks the time is right for his enterprise. (The closest car movie spot to Richmond is the Fork Union Drive-in, near Charlottesville.) His populist take on nighttime viewing under the stars is fueled by childhood memories of backseat popcorn, boxy metal speakers and corny (but now retro cool) “Come to the Concession Stand” intermission spots. The owners have also made an environmental promise to neighbors that viewings will never interfere with the area's beautiful natural surroundings.

In the late 1950s there were thousands of outdoor screens scattered across the country. That number now is less than 400, and finding a working one really depends on where you live. There are no theaters left in states such as New Jersey, where the dashboard viewing fad first started in the early '30s.

Virginia has preserved many of its original drive-ins, but nearly all of them are in Western or southwestern Virginia. There's the Hull Theatre in Lexington, the only nonprofit drive-in theater in the country, and the Moonlite in Abingdon, recently placed on the U.S. Department of Interior's National Registry of Historic Landmarks. The commonwealth is also one of the few places where drive-in activity is actually on the rise — relatively speaking. In addition to the Goochland theater, the recently constructed Park Drive-in in Marion is surviving quite nicely. The outdoor theaters that last usually sit in rural communities where there's little development. “You don't want a lot of ambient lighting,” Heidel says.

Some people even see emerging trends in what the Heigels have planned. “Movie distributors and developers should take a look at this, and see if [the couple's] concept works,” says Garland Pollard, a former Style Weekly editor and the publisher of Brandland USA, a brand-research newsletter. “Real estate is cheap now, and a drive-in might be a good interim use for a stalled shopping center complex. Compared to an actual building, an outdoor theater is a very small investment.”

Richmond hasn't had a drive-in movie theater since the Plaza Drive-In — built in 1957 as the Circle — reopened for four years in the 1990s. Drive-ins really died in Richmond a decade prior. That's when the area's largest outdoor film theater, the Bellwood, closed down. This once-stately screen off Jefferson Davis Highway (which cost a whopping $200,000 when it was constructed in 1948) accommodated an elaborate, walled-off design that ensured blacks and whites would be segregated by separate entrances, lots and concession stands (the cinema's remains became the trading grounds for the popular and racially diverse Bellwood Flea Market).

There were others. The Fairfield, off of U.S. 60, opened as a mainstream theater in 1957, but became notorious in the 1970s for showing X-rated movies. On the other side of the coin, the “new-style” Patterson Theatre was built for $275,000 on the Henrico-Goochland border in 1966 and featured a playground along with other family attractions. Unfortunately, the theater was flooded by Hurricane Camille in 1969 and most of the state-of-the-art children's area was ruined. Worse, the area surrounding the Patterson became a soupy swamp. Yes, it's true that drive-ins were starting to close in Richmond around this time but if anything killed the Patterson Theatre, it was the meanest mosquitoes in River City.

The Heidels have thought about all of this — the pitfalls as well as the potential opportunities. They've pledged to keep concession prices low. “And we've ordered new prints of the vintage intermission films,” John Heidel says. Their new drive-in will accommodate up to 400 cars, and will present a double feature of first- and second-run flicks seven days a week.

Those boxy speakers are gone, replaced by a low FM radio transmitter that patrons can access through the car radio, but Heidel hopes that the experience will be the same as it was during the drive-in's heyday. “It's more than watching a movie,” he says. “People come to drive-in theaters for the experience. There's just something magical about watching a movie in your car. You can't get that experience in a multiplex.”  S

The Goochland Drive In, 4344 Old Fredericksburg Road, will screen double features seven days a week through early November. Admission is $7 adult, $3 children younger than 12 and free for infants. Open 6 p.m. and the first movie begins at dusk. For a current movie schedule visit www.goochlanddriveintheater.com.