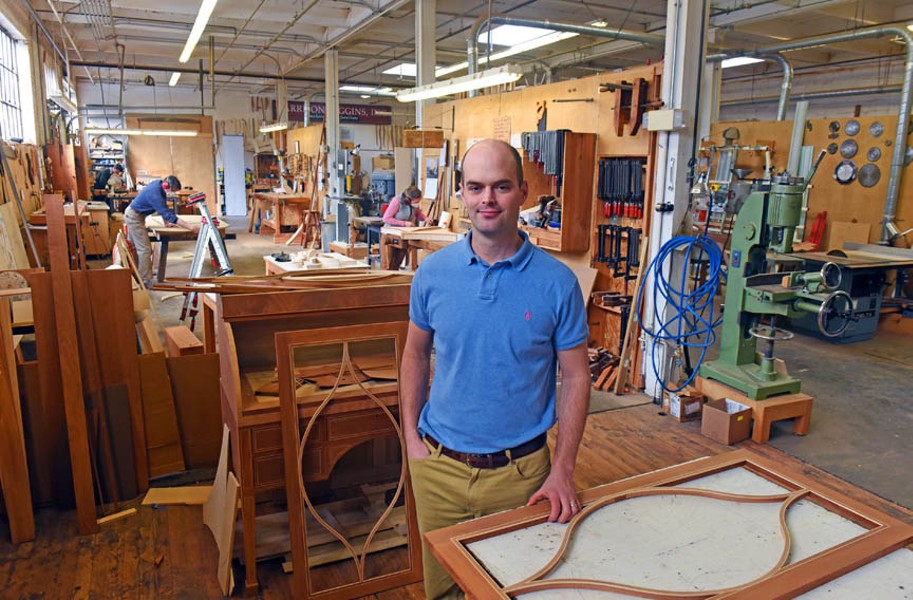 So you have a historical sketch of a piece of furniture that Thomas Jefferson ordered to be made for Monticello. We’ve all been there, right?

He sketched something he liked in France, and when he returned home, he had it made in Virginia. Jefferson died in debt, so the piece is lost to the ages. But what if you wanted one just like it?

If this sounds like a familiar problem, you probably know Harrison Higgins V.

The company his father started, Harrison Higgins, has quietly filled historic homes and museums with such replicas for 43 years — in addition to its regular business of custom furniture making and restoration. From a wood-shaving-covered floor in its Scott’s Addition workshop, seven woodworkers handcraft each chair, table, cabinet and stair in a way that can only be called old-fashioned.

“Really it took about 10 years before my dad was able to start taking more of a backseat role,” Higgins says of the generation change. “It just takes that long to learn how to build all the furniture our clients ask us to build.”

His employees are long-term partners. Two have been there close to 20 years and others a decade each. A newer employee of two years is doing her first solo project. It’s a rare form of apprenticeship that makes it hard to scale the business up, so Higgins doesn’t advertise. People learn about the business through word of mouth — and expect skills and knowledge of furniture-making from the 1750s through modern day.

“Probably 95 percent of what I work on is going to be used on a daily basis,” says David Voss, who performs restorations. “There’s a lot of the history coming down through the family. It’s not necessarily what the market value of the piece would be. It’s the intrinsic value to the person and the family.”

Interior designers working with individual clients drive the bulk of custom work. They’ll have a specific space in mind, an era and a vision for the piece.

“We’ll get a snapshot of, ‘Here’s what I want in this space,’” Higgins says. “I want something of this time period but that fits a flat-screen television.”

One cabinet sketch refers to 18th-century designs with Chippendale motifs but, functionally, it also needs to be a modern bar with faucet and ice maker.

“It’s for a humdinger of a house,” Higgins says.

He points out an antique document storage cabinet that the shop has converted to a wine cupboard for a client. And a chess table for a Richmond home based on an 18th-century Irish design.

Then there are the replica chairs from the 1760s. “There were six daughters and eight chairs,” he says, “and each daughter got a chair. Now they need six copies made for the table.”

It’s family history woven into each commission. Weeks of intense work ensue, the bulk of it done by hand. “When you make one of something,” Higgins says, “oftentimes doing it by hand is still the fastest way.”

Higgins’ grandfather was a doctor who practiced woodworking as a hobby, and Higgins’ father took it up as a career. Higgins the fourth is retired but still comes around the shop to lend his expertise — and work on more modern pieces of his own design.

The younger Higgins wasn’t pressured into the family business, he says. He dabbled out of college, considered studying law. “But I knew if I didn’t give it a shot, I would regret it,” he says. “It stuck.”

Higgins says the biggest shift in the custom furniture business has been the increasing role of interior designers. The furniture-makers used to interact more with the future owner of the piece. Now the designers orchestrate the commissions.

But one change has brought the furniture-makers back in touch with the people.

“There’s the resurgence in the maker movement and people more interested in building things themselves,” Higgins says. “Where it’s not just the piece of furniture, it’s the experience and what goes into that.”

To that end, the shop offers furniture-making classes for the public once a week. One attendee is working on a standing clock. Another has a boat docked in the back of the shop with four years of weekend labor in its hull. Markings on a door frame indicate milestones and hopeful deadlines.

And then there’s the historic home and museum work. Higgins says their work is at Colonial Williamsburg — both the museum and the hotels, as well as Mount Vernon and Montpelier.

Their replica of a desk George Washington used, for example, can be touched and explored by museumgoers.

Monticello is furnishing its second and third floors, Higgins says — a veritable boon for the historical furniture business. The company works with curators who research woodworkers from the era and consult weathered sketches and schematics.

“You build this furniture enough,” Higgins says, “you start to think like an 18th-century craftsman.” S