The Scott Clark 4tet is making it up as it goes along. 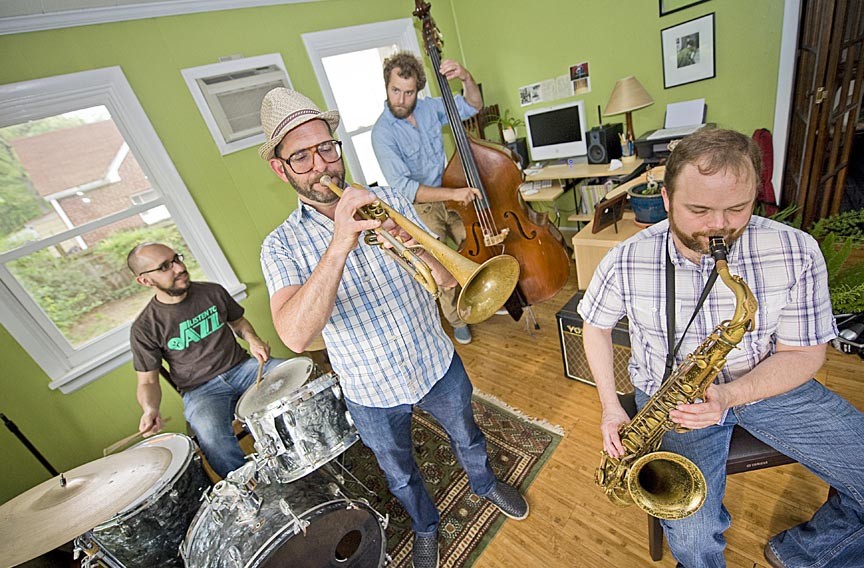 They're a hard act to follow. After one of their early performances, opening the 2011 RVAJazzfest, Doug Richards — the founder of Virginia Commonwealth University's jazz studies program — recalls seeing some out-of-town headliners take the stage with lofty, big city cool. "What are you guys so smug about?" he recalls thinking, "Baby, you've just been cut."

The 4tet players are some of the most prominent of a generation of young musicians who've elected to stay in Richmond rather than seek their fortunes in a declining music market in New York City. But focusing locally hasn't scaled back Scott Clark's artistic ambitions. "It's great to have someone on this scene seeking a fresh, strong, original sound in the art of improvisation," bandmate Jason Scott says.

Relaxing at his West End apartment on a Sunday afternoon, Clark reflects on his unlikely path of free-jazz exploration. A military kid, he was born in Texas and moved through a series of postings before his family settled down in Colonial Heights. He started playing drums at 6, but initially was drawn to a very different kind of music. "I was a band geek," Clark says. "All I wanted was to be in the drum line."

That required becoming adept in the crisp execution of complex sequences of rudiments, the rhythmic building blocks of percussion. His technical skill with hands, wrists and sticks got him through the VCU Music Program audition, but when he turned to jazz he found mastering a drum kit, with foot-pedaled bass and high-hat cymbals, a new and daunting challenge. "That was the hardest adjustment," Clark says. "You have to learn to use your feet like hands."

He discovered a new world of music.  Former VCU instructor Howard Curtis — now a professor in Austria — was a major influence. "Sometimes in a lesson he would just bring in a stack of CDs and we would just listen," Clark says. In those pre-download days Clark made frequent, often expensive forays to Tower Records in search of more music. "I once spent over $200 on a pile of John Coltrane CDs," he says. "I listened to them for weeks, it changed my life."

He graduated in 2005, the heyday of the Patchwork Collective, the movement with the goal of keeping young artists in Richmond. Like the best abstract painters, his unconventional expressionism is grounded in conventional discipline. He started making his mark as a sideman, the rhythmic center in Patchwork co-founder Scott Burton's cinematic post-bop Glows in the Dark and in the avant-pop collaboration Ilad.

"I was writing music for a long time," Clark says. "It seemed like the right time to start playing it." The 4tet lineup was inspired by the harmonic freedom of Ornette Coleman's iconoclastic, chord instrument-free jazz bands. The compositions often draw on Schoenberg's modern classical 12-tone approach, abandoning conventional keys to embrace the full harmonic spectrum (the songs have a warm, spiky charm belying their underlying modernist rigor). His most recent work is a set of songs based on Dale Brown's classic Native American history, "Bury My Heart at Wounded Knee." The standout from that still-very-much-in progress suite is the moving, elegiac "Little Crow's War." The drum part is simple and dramatic, repetitive and vital as a heartbeat.

"You don't need complexity to convey meaning," Clark says. "But honesty is essential."

Ilad bandmate Gabe Churray sums up Scott's unique, multilayered contribution to the local scene with a single word: "Just say he is a ...." The word he uses conveys affection and awe, but it doesn't really need to be printed here. S