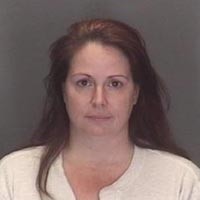 Selected for a business makeover by CNN Money magazine in the spring, Scoot Richmond owner Chelsea Lahmers couldn't help but smile through the irony. A few months earlier, she'd discovered that her business was in need of much more than a makeover. Her accountant, Chandra Tourtelot, on staff since January 2008, had informed her that the $40,000 surplus on the books simply didn't exist.

“That shouldn't have been the case, or a huge mistake was made — or something was fraudulent,” says Lahmers, who confirmed her worst suspicions when two of the largest vendors called to say they hadn't been paid.

Combing through the books, Lahmers discovered nearly $50,000 missing — money that had rolled in during record sales months brought on by last year's soaring gas prices. Other disturbing patterns appeared. When large cash transactions occurred, corresponding amounts didn't arrive at the bank. On the books, there was bounty.

Lahmers fired Tourtelot in November 2008 and called police. A brief investigation and a summertime grand jury session later, Tourtelot was wanted on charges of embezzlement. “We've been struggling ever since this came to light,” says Lahmers, whose plans to open a second location came to a halt when the combined hit of the phantom $40,000 surplus and the more than $50,000 embezzlement left her at least $90,000 in the red.

Police initially had little luck tracking Tourtelot, frustrating both Lahmers and Richmond police detective Jerry Baskette. “I used just about everything I could use to find her,” says Baskette, who has shaggy, bleach-blond Sammy Hagar hair and a dagger tattoo on his forearm. “She was totally under the radar.”

Baskette called on a former colleague, Scott Bagent, a Richmond cop who worked violent crimes before retreating to the quieter life of a Dinwiddie County sheriff's deputy. Bagent went by Tourtelot's house, which happened to be in Dinwiddie. Nothing.

“All I had was that I'd heard she'd been working for Venus Flytrap,” Baskette says, referring to Tim Reid of “WKRP in Cincinnati” fame, whose New Millennium Studios is based in Petersburg. But the Virginia Employment Commission had no records of the relationship.

Two weeks ago, Style Weekly ran a Google search for Tourtelot and found her Facebook page. Tourtelot responded and accepted a request from a Style reporter to be her online friend within 40 minutes.

With access to her Facebook page, Style found Tourtelot had posted pictures of a new car — a green Firebird — with a clearly visible license plate. The page included pictures identifying friends by name, showed her working on set in Chesterfield during a production of ABC's “Supernanny” television show, listed New Millennium as her employer, gave a phone number and indicated that she lived in Midlothian. Tourtelot even revealed a love for online poker sessions, in which she spent hours each night.

After learning of Style's new friend status, Bagent staked out Tourtelot's Midlothian house and eventually contacted her with a false story of having found one of her credit cards. Tourtelot took the bait. Last Thursday, Bagent, with assistance from Chesterfield police, met Tourtelot and took her into custody. A Richmond magistrate bonded her shortly after on a $2,000 unsecured recognizance bond.

On Saturday night at abut 2:30 a.m., she shared online poker chips with a Style reporter. Within hours, Tourtelot unfriended Style.