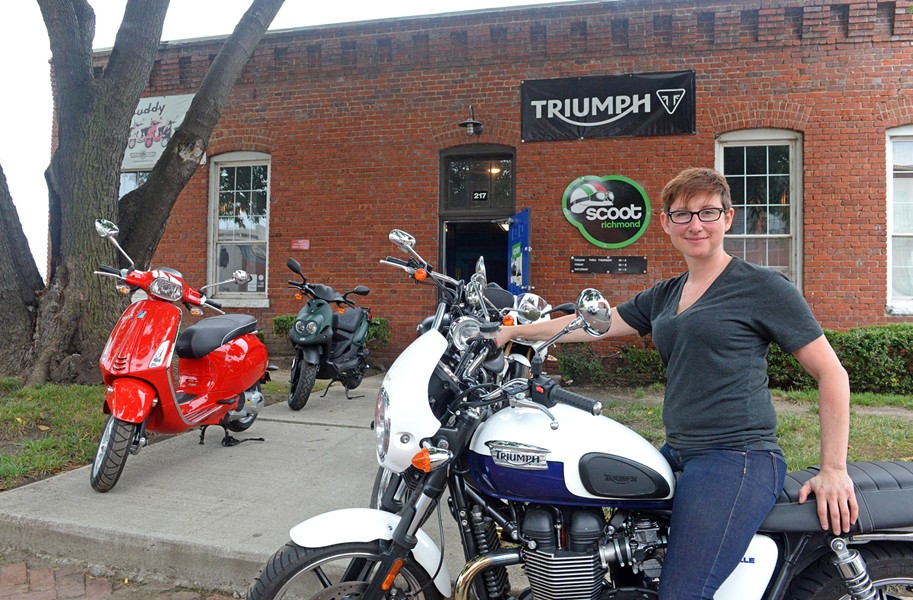 Hold on tight. Scoot Richmond, the Manchester-based shop whose popularity has grown along with the number of scooters across the city, soon will sell motorcycles with engines more powerful than some cars.

The store will re-launch as a Triumph motorcycle dealership Sept. 20. Scoot owner Chelsea Lahmers says it's a logical progression, especially for customers who started on Vespas and moved to more menacing machines.

"We've had lots of customers on a 50cc bike, and then they wanted something bigger. We didn't have anything to put them on," Lahmers says. "We'd have a great relationship, and then we'd have to send them to another dealer."

Standing in the newly painted front of her converted warehouse crammed with high-speed machines, Lahmers says she would have scoffed at the idea of selling motorcycles when she started.

Back in 2002, the operation was simply a parts business for scooters that didn't even require a motorcycle license to drive. And Lahmers' experience with motorcycles up to then was a dirt bike she received for Christmas as a child and crashed into her house.

"I was petrified of motorcycles for the next 18 years," she says.

But Lahmers says she was intrigued when Triumph asked if she would be interested in becoming a dealer. They should be easy to sell, she says — the England-based company has amassed a loyal following and offers models ready for first-time riders. It will be the only dealership in the Richmond area.

The 25 bikes she offers range from relatively comfortable-looking touring bikes to a Rocket III — a 2,300 cubic centimeter behemoth that she describes as "an engine with a seat and two wheels."

With Triumph in place, Lahmers says she's pursuing the possibility of adding manufacturers to the stable. But she stresses that loyal scooter riders won't get left behind — there are plenty of scooters she's looking to sell.

"I'm here to serve both," Lahmers says. "It's not mods or rockers, it's mods and rockers. It all goes really well together."