Fifteen years later, the creators behind the "Atomic-Robo" comic are still boldly going.

Scott Elmquist Scott Wegener, an adjunct instructor of illustration at VCU, and his creative partner, Brian Clevinger, have been publishing the "Atomic Robo" comic for 15 years. Fans love its "mixture of comedy, nerd trivia and action," and the strip has twice been nominated for an Eisner award, the Oscar of the comics world.

Brian Clevinger and Scott Wegener are seemingly unaware that their popular retro-futurist comic book, "Atomic-Robo," is celebrating its 15th anniversary this year. "Has it been that long?" artist Wegener asks out loud.

The confusion shouldn't surprise diehard readers of the sleekly-designed, cheekily-scripted sci-fi comic. With adventures traversing the centuries and crisscrossing dimensions, the concept of time means nothing in the world of "Atomic-Robo."

"The big trick of Robo, how the story works, is that it's not told in order," says Clevinger, participating in a Zoom interview with his creative partner. "You can read it in any order, so we are able to play with time and make it seem more filled in than it is." With each issue finding the atomic-hearted hero and his team at Tesladyne Industries in a different period and place, he says, "you can really play around with chronology."

"‘Atomic Robo’ is hands-down the best comic featuring a century old robot that fights dinosaurs and teaches science," writes Leigh Kade in Bleeding Cool magazine, echoing many other indie comic reviewers intrigued by the strip's mixture of comedy, nerd trivia and action. Clevinger and Wegener have built a solidly-plotted, if utterly ridiculous universe as seen through the visor of an android created by inventor Nikolas Tesla, who leads a company of "Action Scientists" against, among other things, giant ants, diabolical (and snarky) dinosaurs, and enhanced Nazis.

For their efforts, the duo has twice been nominated for the top award in comics, the Eisner, and built up a fanbase that enables them to make a comfortable living by crowdsourcing on Patreon and Kickstarter each installment’s wild, tongue-in-cheek exploits (approximately nine a year). They elicit more than $50,000 an issue from fans who can't wait for what comes next in the "Atomic-Robo" comic, or one of its spinoffs, like "Atomic Robo: Dawn of a New Era," which follows life at the protagonist's boarding school for budding "Action Scientists."

Science behind the silly

Both artists are self-admitted sci-fi nerds, and it shows. The punch-em-up action of Robo will often stop dead in order for the characters to hilariously debate the actual science behind many of its fantastic adventures. But the cosmic Bob and Ray routines are grounded in well-researched history and science -- with visionary thinkers from Stephen Hawking and Alan Turing to Carl Sagan making irreverent cameos.

One inspiration for the time-warping strip has been British science historian James Burke. "He shows a different take on history and how things and events can be interconnected in unexpected ways," says Wegener. "It's a lot like Robo. Random things are happening, bouncing off each other. This can lead to that because of this accident over here ..."

One key random thing happened to Clevinger when he was attending the University of Florida and found himself in a class on the history of comics. The final exam was to actually create a comic. The Sunshine State native, a budding scribe, couldn't draw, so instead he appropriated images from a video game, “Final Fantasy,” and created “8-Bit Theater.” Inexplicably, it became a viral hit in the early ‘00s, copping Clevinger a Web Cartoonists' Choice Award in 2002 and generating enough income from advertising online that he dropped out of school. "While that was winding down, I started dreaming up this robot character," he says. "And then I met Scott."

Hailing from Staten Island, New York -- home of the Wu-Tang Clan – Wegener was always drawing as a kid, he says, "but art school or art as a career never came up in my family.” He claims to have been a terrible college student but still earned his degree in aviation management from Daniel Webster College in New Hampshire; a background in flight makes sense considering that his airplane and spacecraft depictions are fluid and feel accurately airborne. "If you need someone to run an airport, I could do it, theoretically," he says.

The very first adventure, “Atomic Robo and the Fightin' Scientists of Tesladyne,” was published in 2007 by Red 5 Comics, who continued to publish the comic until 2013, when Clevinger and Wegener made the bold step to go independent and publish "Atomic-Robo" and its spinoff titles online.

They were told that they were crazy.

"The fear was that people would just give up on print," says Wegener, who is also an adjunct instructor teaching illustration at Virginia Commonwealth University. "We figured out that there is no crossover. There are people who will never want a digital version and people who never want the print version. But we can create the same content, package it differently for both and make more money off of everybody. And here we are." Print editions often appear a few months after their initial debut on the web, in editions issued by IDW Publishing. 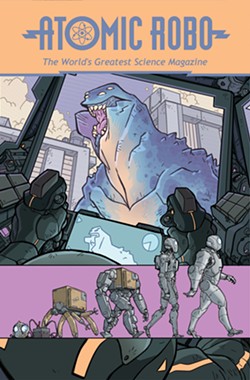 "The web comic scene has really exploded since I did '8-Bit Theater," says Clevinger. "I hate to put an emphasis on financial reward being the arbiter of success, because it's not, but it's wonderful that there are so many voices out there now using this model to put out their comics. I mean, it's never been a better time to be a creator. The internet is inexpensive and the tools are right there for success, if you are driven enough."

"We were doing OK in the traditional publishing world," adds Wegener. "With the digital medium, it's much easier to connect to an audience in that unique niche you are occupying, so you can find the 10,000 or 100,000 people globally who are going to support you, and enable you to make a career of this rather than something you have to do on the side."

When they started “Robo,” Scott lived in New Hampshire while Brian was still in Florida. "Eventually we started moving closer to each other,'' says Wegener, who came to Richmond in 2015. "It was the perfect midpoint," adds Clevinger, who moved here five years earlier. "I came to Richmond originally to be close to my girlfriend's parents. The city has a great artistic vibe."

"Atomic-Robo" is known for being kid friendly in a medium that has become more adult. While both creators have done work for big comics publishers Marvel and D.C. (even collaborating on an “Iron Man” comic giveaway for Taco Bell happy meals), they decry the style and approach of most modern comics. The creators post a mission statement at the atomic-robo.com web site with a list of things you won't find in an “Atomic-Robo” adventure:

#1 No Angst (You are not going to see Robo mope about his lack of emotions, or pine to be human, or throw a tantrum over daddy issues)

#4 No Filler (Why should we devote a month of our short lives to creating an issue if it isn't worth reading? And then why should we try to sell you an issue that isn't worth buying? We publish in an on-going mini-series format so we're free to jump straight from one adventure to the next.)

#5 The Main Robot Punches A Different Robot. .. Or Maybe A Monster (So let's cut out all the dumb stuff that could get in the way of letting you enjoy that.)"

When "Atomic-Robo" first came out, Wegener says, it was rare to have an adventure strip that wasn't violent or filled with more explicit themes.

"You had a lot of material clearly aimed at young children, and material for adults, often very graphic. What Robo might have been unique at, although not anymore, was that we approached it like Buckaroo Banzai meets ‘Ghostbusters,’” he explains. “We emulated these comedy sci-fi franchises that were written at a level that adults can enjoy but were also appealing to kids. That's the sort of media we wanted to see more of in the world."

"That's the key to our vibe," Clevinger echoes. "We're not talking down to kids. The whole concept is ridiculous, but we get away with it because we also point out that, hey, this is silly. In a sense, ‘Atomic-Robo’ is a workplace comedy, except the workplace in this case is the most dangerous place in the world."

To check out their work and learn more, visit atomic-robo.com