At Charm School Social Club, there’s plenty to learn about the craft.

Zavaleta sat down with Style to share the science, stats and sweetness behind Charm School's A-plus report card of success, and here's what we learned.

It proudly brews Lamplighter Coffee Roasters coffee for the latter. While it's important to have vanilla on hand, it usually only appeals to the "really old or really young," Zavaleta remarks. "When you're younger, it's very palatable, it's what you know, it's easy. And most kids want a vanilla ice cream. I'm not going to keep that from them because it's not exciting enough."

And when it comes to adults older than 50, he says with a smirk, it's usually the men who survey the list of flavors and then go for vanilla.

"To be fair, as someone who owns an ice cream shop, I eat vanilla the most," he says. "I don't eat that much ice cream anymore, but if I'm going to eat something, more often than not, it's vanilla."

For Zavaleta and Hillerson, vegan ice cream is more than an afterthought.

"If you voluntarily or involuntarily don't consume dairy, you shouldn't be an afterthought, or missing out. You should be able to get, in essence, the same thing that someone else gets​," he says proudly. "It's important that the community has that option."

When the two attended a Penn State University ice cream short course, a seven-day cow-to-cone session in the food science department, they heard a talk on the challenges of agricultural sourcing as it relates to dairy substitutes in ice cream. This is something both small shops and commercial giants are wrestling with as they try to provide more innovative dairy-free treats, and Zavaleta firmly believes it's "not just a food trend.

Charm School utilizes different bases for the vegan flavors, including cashew and coconut milk. Though recipes and methods are proprietary, Zavaleta can share that flavors work based on chemistry and matching the right depth of sweetness or bitterness to the right base. A fruit flavor will go better in a coconut base, for example. Vegan peanut butter and jelly made it into the rotation in July, and the base is oat milk made in house.​ Even without any dairy, it​ has the smooth, creamy elasticity of a traditional hard ice cream, the nostalgic flavor of a childhood lunch and no ​aftertaste​ often found in dairy alternative desserts.

There are, however, limits to the magic. Zavaleta is often asked why they can't produce a vegan vanilla and the answer is, again, chemistry.

"If you add vanilla to coconut, it is just going to enhance the flavor of the coconut, and you taste a coconut ice cream," he says. "A vanilla will enhance all the flavors because it's a floral and it'll bring a lot of things to the front of your palate when you try it."
Share a New Perspective

Ice cream that may fall into that category? Avocado, perhaps, or the Black Magic, a jet black dessert with activated charcoal that comes in both dairy and vegan.

Soft serve, which will be the focus at the Forest Hill location, made a quiet debut at the Broad Street shop in early August. So far flavors have included chocolate and raspberry with a hint of pineapple, both vegan.

Keep an eye on Charm School's social media pages for updates on flavors, dairy-free and otherwise. 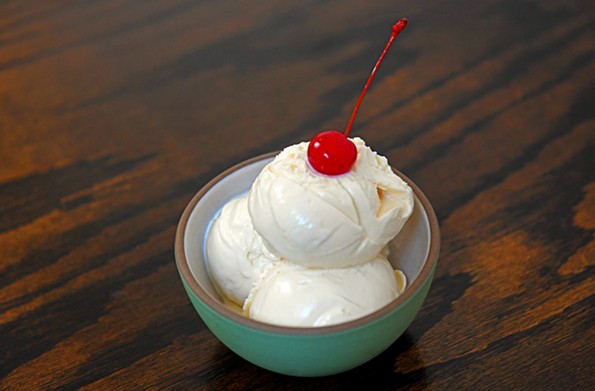 Combine the milk, 1 cup of heavy cream, vanilla seeds and ¼ cup of sugar in a heavy-bottom pan and set to medium-high heat. Using a rubber spatula, stir until the sugar dissolves. Take the pan off the heat and set it aside to steep for 20 minutes.

Whisk the egg yolks and the rest of the sugar in a nonreactive bowl until slightly thickened. Temper the vanilla-cream mixture into the yolks, slowly adding small portions at a time while whisking. Once you've added half of the mixture, pour it all back into the heavy-bottom pan.

Prepare an ice bath with two bowls and put the remainder of the heavy cream in the smaller bowl.

Pour the mixture through a strainer into the cream sitting in the ice bath. Let the mixture sit for 10 minutes while occasionally stirring.

Stir in the vanilla extract. Don't add too much because the alcohol in the extract will depress the freezing point and make it harder to churn.

Put the mixture in an airtight container. Place it in your fridge until well-chilled.

Following your ice cream maker's instructions. Churn ice cream and transfer to freezer for at least 12 hours. Then enjoy and maybe have some pie ready. We suggest anything from Proper Pie.

Back to the Ice Cream Issue