The short game (and the long one) behind the mayor’s showdown with the Richmond Public Schools. 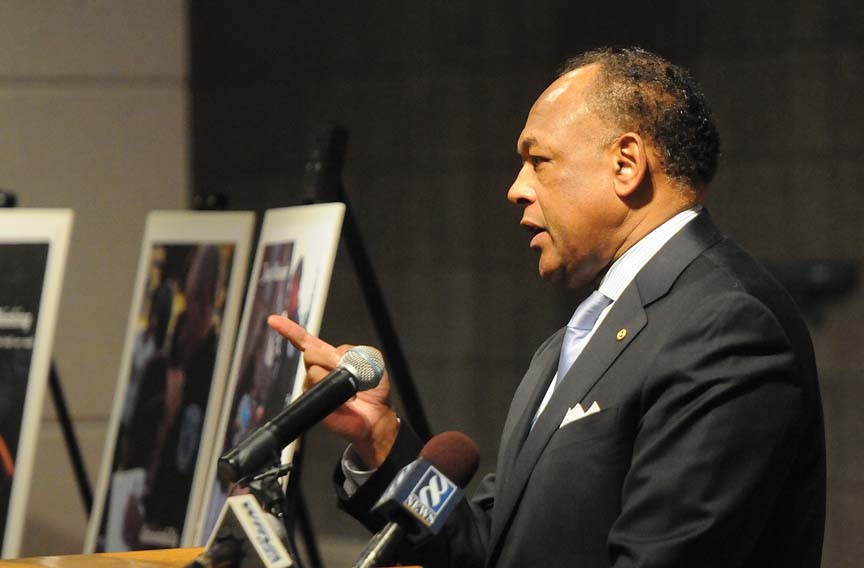 It isn't exactly a refuge. Under heavy fire from Mayor Dwight Jones, Richmond Public Schools administrators and School Board members are making their case to a small gathering of residents at the Southside Community Center, off Hull Street and Belt Boulevard.

The purpose: to explain how things got this bad.

While the state's contribution to the school system's annual budget has declined, so has the city's financial contribution. Operational costs are rising, and the federal stimulus money that propped up previous budgets has disappeared. All told, the district is facing a $23.8 million budget shortfall in the coming year.

"You can cut a piece of meat until you get to the bone," 9th District School Board member Evette Wilson says, making the board's case to the sparse crowd March 28. "But if you do, what are you really cutting? Quality."

But it isn't just the budget woes, or that nearly 300 workers could be laid off as one of a series of painful cost-saving measures. This being an election year, the School Board's February decision to forgo enacting the cuts recommended by Superintendent Yvonne Brandon has turned the budget into a political hot potato.

Mayor Jones, who hasn't announced whether he'll run for re-election, has nonetheless seized on that decision to forgo cuts. It's no mistake that the performance of city schools is but one area of vulnerability for Jones. Now, improving that performance likely has become a key plank in his expected bid for four more years.

As the May deadline to finalize the city's budget gets closer, the two sides have begun a public-relations war of sorts, each holding public meetings to make their cases for how the budget shortfall should be addressed. With at least four of the nine School Board members having announced they won't run for re-election this fall, the School Board essentially is up for grabs.

The mayor knows this, as do School Board members and the superintendent. And what transpires over the next month and a half likely will set the course for Richmond Public Schools for the next four years.

That Jones has become more aggressively critical of the schools' performance isn't all that surprising, some observers say. He telegraphed the shift in tone in January during his state of the city speech.

"A tier-one city has got to recognize that we will accept nothing but excellence in education," Jones said. "We have got to let go of the mediocrity."

Fast-forward to March — after the School Board approved a budget of $239.9 million, which didn't reflect the nearly $24 million funding gap. Jones, who's enjoyed a breezy relationship with the board for the bulk of his term, balked at picking up the tab for the shortfall.

He's since announced the formation of a task force of well-credentialed — not to mention well-connected — people such as former Virginia Secretary of Health and Human Resources Ron Tillett and former Dominion Power executive Eva Teig Hardy to re-examine the schools budget and identify a short-term solution. To the delight of the business community, Jones also hired former City Manager Robert Bobb as a consultant to help recommend and implement the budget cuts.

On the surface, the move would seem to be pure politics. Three years in, the mayor has very little political capital. Jones moved at a snail's pace on big projects such as the city jail and plans for a new ballpark, and his bigger ambitions — poverty reduction and public housing, for example — are years away from being realized.

But the education attack is late, former School Board member Carol A.O. Wolf says. "The state funding issue has always been skewed," she says. "This mayor has been around for so many years, and yet nothing has been done to equalize it."

David Hicks, Jones' senior policy adviser, is unapologetic: "Nobody is going to deny the fact that the $23 million brought to a head some other discussions that might have taken place over the long term," he says. "If you see the mayor putting his political heft behind this, it's an indication of how serious he is that we cannot continue to spend a quarter of a billion dollars and not get a top-rated school system."

Still, the push back from the mayor's office came as somewhat of a shock to some members of the School Board. Both sides long have been aware of the potential for a significant budget shortfall this year, says Chandra Smith, the School Board's 6th District representative. "Given how well we've have been working together," she says, "I think we expected there to be some sort of a safety net."

Smith says that in previous years the board trimmed the budget before sending its request back to the mayor for consideration. But she says this is the first time that balancing the budget would require cutting jobs, as per the superintendent's recommendation. The board's vote was intended as an initial step in the conversation, she says: "We aren't expecting the city to fund the entire budget gap."

Privately, however, some sources speculate that the board had other reasons. The city is sitting on $62 million, the result of the Richmond Metropolitan Authority's paying back old loans from getting the expressway system up and running. It's more than enough money to shore up next year's school budget.

Nor the long-term political ones. "When you talk about the schools budget deficit," Hick says, the School Board's "request would be more palatable if it was being pushed by people who were going to be around when the check comes due."

Indeed, the four board members who aren't running for re-election — Wilson, Smith, Kimberly Bridges and Adria Scott — voted to send the budget back to the mayor with the gaping deficit.

For Smith, the decision partly was about giving the superintendent political cover. "The question became whether we were willing to take some of the heat with Dr. Brandon, and we were," Smith says. But come next fall, only half of the current board will remain to deal with the fallout.

Just as important for the incumbents is whether the mayor's new strategy extends to throwing his weight behind potential challengers. Jeffrey Bourne, the mayor's deputy chief of staff, is said to be considering a run against 3rd District representative Norma Murdoch-Kitt. And there's buzz that the mayor's son, the Rev. Derik Jones, also is contemplating a run.

"I'm not convinced that the mayor or the board is as committed to change as they should be," Wolf says. "But this is a bad as I've ever seen it, and something has got to give." S