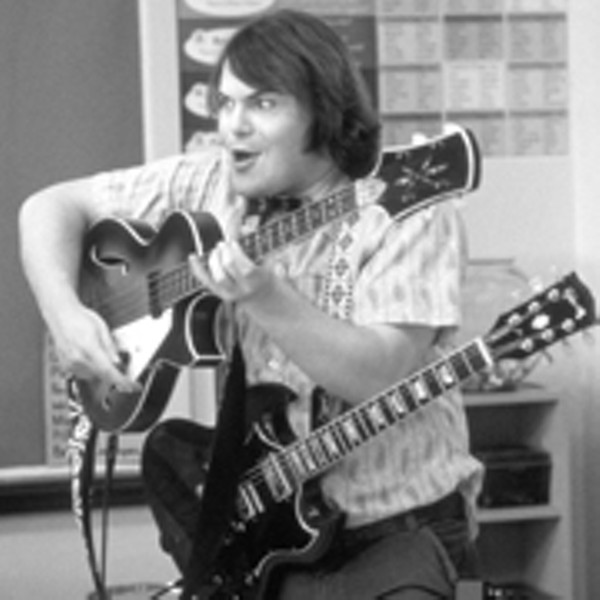 In “School,” Black’s character, Dewey Finn — another rotund, loafing cutup, has similar aspirations but is not so successful, after recently being booted from a very bad small-time band. His roommate, Ned (Mike White), is also fed up with him, or at least he’s being told to be fed-up by his controlling girlfriend, who frowns upon Dewey’s cavalier attitude to things like rent and waking up before she gets home from work. The trio’s interaction is the best and funniest part of the movie. White wrote the screenplay, following writing and acting credits for the overrated Jennifer Aniston film, “The Good Girl,” and the underrated “Chuck and Buck.”

It is disappointing to see Black involved with such an artificial film. The setup is that Dewey needs money. To start another rock band? To pay the rent? Either way, there must be easier ways to make a buck than impersonating a substitute teacher at a private elementary school, but Dewey is not a demanding man. (And hey, why not impersonate a substitute teacher? It’s so crazy it just might work!) At first he sees only an opportunity to clock some nap time and a paycheck. But when our would-be Mr. Holland discovers that his charges have musical training, in come the Flying-V guitars and the Marshall stacks; Dewey’s found new recruits to help him win the upcoming battle of the bands.

Practicing rock songs in class all day every day without attracting any attention, Dewey must have lucked into the classroom that parents, administration and time forgot. To overcome such a ludicrous situation, the filmmakers pile up contrivances like plastic bricks in front of a bursting dam. “Do you expect us to believe this crap?” one parent asks. He refers to Dewey’s BS-teacher presentation on parents’ night, but the audience is left to take its own meaning. You can just imagine Black and co-star Joan Cusack (playing the cranky principal) smoking cigarettes behind the set during the shooting of this movie, rolling their eyes and snickering.

Director Richard Linklater’s work is known to be conceptually innovative, even if intellectually middlebrow. In 2001’s “Waking Life,” he reinvented the animated feature but used it to convey the clichéd, not-so-deep thoughts of pot-smoking philosophy students. “School” is a toss-off, a hodgepodge of movie clichés and outright plagiarisms, from the exhausted fish-out-of-water scenario to the awkward Asian kid who’s transformed into a cape-wearing keyboard stud a la “Revenge of the Nerds.” The rest of the children come off as a rudimentary update of the kids in “Our Gang,” complete with an Alfalfa-esque scene of a tone-deaf child trying to sing. Black teaches them that the reason rock ’n’ roll was invented was to “stick it to the man.” But at rock shows that take place during school hours? Dude, that’s so uncool.

Black’s comedy roles are becoming routine, different inhabitants of the same frat house. He wants to be John Belushi but has only succeeded in being Jim. Adding young cherubs doesn’t help. Instead of Bluto, or even Booger, we get a G-rated version of “Beavis and Butthead.” Considering the hastily produced work that Paramount cranks out every year, it’s no surprise that “School of Rock” is simply a silly, overly cute gimmick gone awry. But given the title — which, one would think, was penned with Black’s resume in mind — it is downright criminal that it would have nothing in common with Tenacious D, except at the most groveling level. * S