Behind the scenes of Jason Mraz’s new video at Binford Middle School.

On a chilly Sunday afternoon in March, the streets of the Fan are mostly quiet. The sky is overcast. But inside Binford Middle School, it's nothing but color, energy and creativity.

Teachers, parents and volunteers mill around with clipboards in the school's entry, checking their watches and chatting. There's a cheer from upstairs, and moments later, children as young as 9 pour through the hallway and into the auditorium.

They stream in by the dozens, snacking on bags of Goldfish, swigging from water bottles, prancing with their arms linked and squealing with excitement. Among the mob of kids, which range from elementary to college-age, is a smiling, relaxed, familiar Richmond face, sporting a lightweight hoodie and his signature fedora.

Pop star Jason Mraz is in town to film his latest music video at Binford with the help of about 200 young people. The song, "Have It All," is a catchy and melodious ode to a younger generation about to embark on life changes.

"It's intended for those graduating," Mraz says of the newly released song. "We wanted to re-create the graduation experience."

Mraz, a California-based singer and songwriter who grew up in Mechanicsville, makes it back to the Richmond area a couple of times a year to visit family and volunteer with local arts programs. As an alumnus of the School of Performing Arts in the Richmond Community, or SPARC, he's donated money and been involved with the organization for years. In 2012 he helped launch Live Art, SPARC's special education program that's inclusive of children of all abilities and talents. It culminates in a star-studded performance every June.

"The idea is that we just stay in communication with the school and help create opportunities, or just be a friend, or an ally, or a resource if that school needs some assistance," Mraz says. "Most schools, they know how to be schools. Turnaround Arts injects art into the curriculum in ways that maybe they hadn't thought of before, and the whole point is to improve attendance, improve test scores."

In addition to the elementary school Mraz adopted where he lives in San Diego, he became the Turnaround artist for Richmond's Binford Middle School last spring. He's in good company, too -- other Turnaround Artists include Usher, Elton John, Whoopi Goldberg and Rashida Jones, the daughter of Quincy Jones. 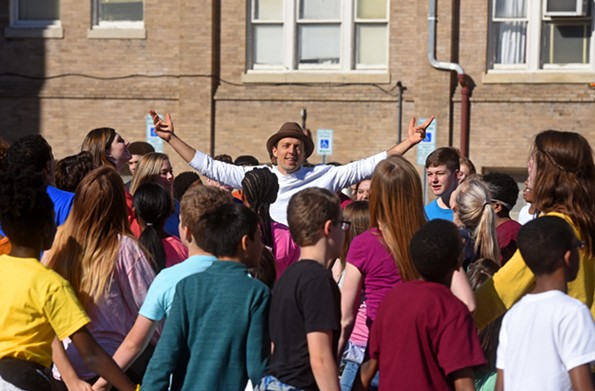 "For my own career, I just didn't want to have to have a day job, and as a kid, I loved performing arts," Mraz says. "If I could be in a show, if I could dance, if I could act, if I could sing, I was the happiest.

"So when I became a successful artist and started donating to SPARC, I saw how my success was now contributing to new generations of artists that are on their way up. I'm sharing the wealth and I'm sharing the spotlight so that other kids can have their opportunity to feel happy. That's really it. It's just about happiness."

So when Mraz decided that the video should embody the energy and excitement of young performers dancing up and down the hallways of a school, filming it in Richmond was a no-brainer.

Mraz and his producers teamed up with SPARC, Binford, Martin Luther King Jr. Middle School, Woodville Elementary School, Communities in Schools, Boys and Girls Club of metro Richmond and Robinson Theater Community Arts Center to recruit about 200 young people who love being on stage and could handle a rigorous 10-hour day of filming.

"We thought a collaborative dance-party-style video would be fun," SPARC director Ryan Ripperton says. "The video represented a grand artistic vision from the beginning."

The young performers did learn and rehearse a choreographed dance, which appears in pieces throughout the video. But for the most part, Mraz and Ripperton describe the whole day and the resulting video as wild, creative and freeform.

"In the final video, it just comes across as this raucous, wonderful, superfun kind of atmosphere," Ripperton says. "And that's not just a result of great editing. It really reflects the vibe of the day."

Despite the large number of kids participating, Mraz doesn't want anyone to feel like a backup dancer. And as his own drama teacher taught him when he was in high school, one person on set is no more or less crucial than the next.

"When you see a group of kids that are 150 kids strong it's easy to think: 'Well I'm in the back, nobody can see me.' So what I hope every kid gets is that there are no small roles and that they, each one, no matter where they are in the group, they contribute to the effect of this large dance," Mraz says. "It takes every single person to give us the effect of filling up this blacktop." 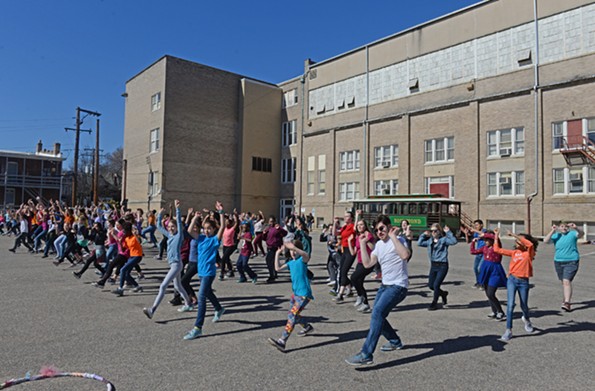 He applies this lesson to more than the performing arts.

"Everything in art requires collaboration," he says. "Even if you're a painter and you're the only person that put paint on that canvas, you're gonna have to collaborate with an art gallery, with an art dealer, with a customer. You'll have to collab with a space, a wall, critics, all of it. So I think learning that early helps."

Gabby and Nyla Addotey, sisters among the 200 cast members today, can attest to that. When asked about their experience being on set and filming, the girls light up.

"It was amazing," says Gabby, who's in fifth grade. Nyla, a seventh-grader, adds that the day was filled with energy and "everybody was just so excited."

The girls are involved with Live Art for the first time -- Gabby takes an afterschool class called Modern Movement, and Nyla attends Drums and Dance -- and their mother, Vivian Addotey, says she didn't hesitate when her daughters were selected to participate in the video.

"My girls are loving it, working with the diverse group they get to work with," Addotey says. "When they called to let me know that my girls were selected to be a part of the video, it was just amazing. This is our first year so we had no expectations, we were just excited to be a part of Live Art and SPARC."

In addition to bopping up and down the hallways and dancing to Mraz's song -- which the girls estimate they heard at least 20-30 times throughout the day -- the performers gather outside for an "arts explosion," which is exactly what it sounds like.

Stations around the blacktop are set up for a drum circle, hula hooping, ribbon dancing and foot painting. The giant circuslike ordeal also includes the double-dutch team from Martin Luther King Jr. Middle School and Host of Sparrows aerial artists.

"Certainly anybody walking by would think:'What is happening in that parking lot?'" Ripperton says.

Mraz makes his way around to each station during filming, which Nyla says was one of the highlights.

"I think my favorite part was toward the end when we were almost done filming, and we were doing different activities, hula hoops and ribbons, and Jason came by with a guy and a camera," Nyla says. "And he interacted with basically everybody and started getting into the activities with us, and at the end of all that we just danced for fun. It was really awesome."

Nyla and Gabby have shared every moment of the day with each other and their family, and weeks later still recall every detail with elation, finishing each other's sentences and grinning ear to ear. But they couldn't say a word to any of their friends.

"I was exhausted because it was on a Sunday and we had to go to school the next day," Nyla says. "I was really tired and my friends were like, 'What did you do,' and I'm like, 'A lot!'"

It hasn't been easy to keep the video a secret for two months, but now the video's out. "I kind of expect to go to school one day and have half of my class run up to me like, 'Oh my gosh, I saw you on YouTube!'" Gabby says.

While much of the video focuses on the kids as they jump and sway to such lines as, "And may you get a gold star on your next test, and may your educated guesses always be correct," it also functions as a love song to Richmond.

With shots of Cary Street's cobblestones, the city's most vibrant murals and glimpses of the James River, Mraz shows his affection for the city he left years ago when he moved to California to try to hack it as a singer.

Some things about Richmond haven't changed, like the salad bar at Ellwood Thompson's Local Market that he still frequents when he's in town. But as the art, food and beer scenes continue to put Richmond on the map, Mraz finds more reasons to take pride in his hometown.

"Kids of my generation have grown up to become business owners, teachers, artists, leaders in the community, and they've just brought a freshness to the city," Mraz says. "When I was growing up we didn't have RVA, and that's now where I tell people I'm going. It's something that every pocket of Richmond can get behind, and I like that, it creates a unity."