A bill to eliminate school boards could set off a legislative brouhaha — but it just might be good public policy. 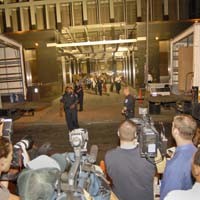 Here's one way to end the bickering between City Hall and the Richmond School Board: Nix the School Board entirely.

The idea's being floated by Delegate David Poisson, D-Loudon, as a proposed amendment to the state's constitution during the next session of the General Assembly. Specifically, the proposal would allow the General Assembly to grant localities the authority to do away with their school boards, instead bestowing the power on their municipal-level elected bodies — in Richmond's case, City Council. The city's chief administrative officer would have executive authority over the school system's day-to-day operations.

That would have been a dream come true for Mayor L. Douglas Wilder, who began his four-year feud with the city's school administration nearly the instant he took office. Shortly after moving in to City Hall's second floor, Wilder set about working to kick the School Board out of its upper-floor suites, and began arguing that he had authority to fire the then-superintendent of schools, Deborah Jewell-Sherman.

The feud came to a number of heads, including Wilder's Sept. 21, 2007, attempt to evict the school administration from City Hall.

Poisson's proposed amendment, which is being reintroduced after it was tabled and allowed to die during the last session, would serve “a couple of functions,” he says.

“One is a financial matter. The simple fact is that while I don't expect that we will see any major reductions in tax obligations coming in the future,” there's nowhere left to make huge cuts, he says. “The only option to us is that we begin operating government differently.”

Eliminating school boards shouldn't have much of a material effect, Poisson says. The elected school board in Virginia — an authority created by similar constitutional amendment only 16 years ago — is largely a paper tiger.

“The spending authority for the school budget rests with the school board,” Poisson says, but the same body has no ability to tax, which means it must go hat-in-hand to municipal leaders to ask for money. Without the ability to raise its own funds, it also lacks full accountability to voters for what it does with those funds. “What you have is two different government entities working together sometimes — and sometimes not,” he says.

This split-personality arrangement became a legal matter in Richmond during Wilder's tenure, when he argued in court that the city had no financial responsibility for an arrangement that the School Board agreed to. Wilder's legal hair-splitting absolved the city of financial responsibility in the case of a court settlement between the schools and city parents who sued to force compliance with the federal Americans with Disabilities Act of 1990.

Poisson's plan cuts out a school board that essentially acts as a middle man. “This leaves to the localities the decision of saying we think one authority could do this as well as two,” he says.

But the proposal has plenty of detractors. The Virginia School Boards Association vigorously opposed last year's version of the proposal. And it's wildly unpopular with many old-guard education leaders such as former Richmond School Board Chairman Melvin Law, part of Mayor-elect Dwight Jones's transition team.

“I think that's a very ill-conceived and ill-timed amendment,” Law says, calling Poisson an “errant legislator” and predicting “that [the proposal] would never pass in the state of Virginia.”

Rather, Law says he would favor giving taxing authority to school boards, making them fully accountable for their actions. Delegate Tom Rust, R-Fairfax, introduced a proposal to study doing just that. The proposed legislation, which the Virginia School Boards Association supported, died in committee.

“The primary job of local government is to raise money for the schools,” Law says, noting that most localities spend somewhere close to half of their yearly budget on education.

Poisson says he expects this sort of reaction to his proposal, calling his effort “slaying of some of those sacred cows we've had in government.”
But with the need for heavy financial belt-tightening likely in the near future, consolidating duplicate efforts and finding ways to run government more efficiently will become ever more important, he says. “This bill does not impose that requirement on any locality,” Poisson says. “It just says here's another arrow in your quiver.” S