A smorgasbord of showmanship at the CenterStage grand opening. 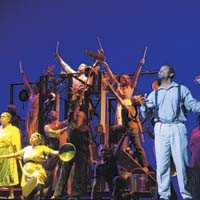 If 1,800 of Richmond's culturati appeared a little wigged out Saturday night as they filed out of the refurbished Carpenter Theatre and onto the sidewalk under the venue's dazzling new marquee, forgive them. They'd been bombarded for more than two hours by a kaleidoscopic cavalcade of showmanship.

Eight of Richmond's leading performing arts groups took the stage — and in the case of the Richmond Symphony, the orchestra pit — to strut their stuff in an ambitious, seamless production of unprecedented size and scope for Richmond. The enthusiastic, standing-room-only audience wanted to be here for the opening celebration of the $73.5 million CenterStage.

The festive spirit was contagious. When Gov. Tim Kaine — after concluding his brief, opening stage remarks with “Now, without further delay, let the serious fun begin” — made his way to his seat next to join first lady Anne Holton on the front row of the mezzanine, much of the audience in the theater's upper reaches broke into spontaneous applause — something seldom seen at a nonpolitical event here.

Given the daunting challenge of showcasing CenterStage's nine producing resident groups in a single production, the gala's director, Keith Martin (managing director of the Richmond Ballet), did a masterful job of keeping things moving deftly. Introductory remarks for each performing group by co-hosts Tim and Daphne Reid were brief, informal and charmingly self-effacing.

The program was book-ended by two spine-tingling displays. When the Richmond Symphony struck up “The Star-Spangled Banner,” dozens of American flag-bearers hot footed it along the stage apron and through the theater aisles. When they marched out of sight, live footage of the Richmond Symphony was projected onto a large screen while the orchestra bolted into Shostakovich's “Festive Overture,” led at a spirited clip by associate conductor Erin Freeman (the orchestra opened the second half of the program with Leonard Bernstein's overture from “Candide”).

A visually thrilling final section of Richmond Ballet's “Windows,” choreographed by Stoner Winslett, closed the program as a host of dancers flowed onto the stage not only from the wings but also from the aisles of both orchestra and mezzanine sections carrying glowing orbs and silk-like streamers. Moments later, to audience gasps, a handful of other dancers descended from the fly gallery above the stage. It was a finale of Cirque du Soleil dimensions.

If much of the evening's programming was either schmaltzy or, well, less schmaltzy, it hit the right note for what was essentially a smorgasbord of entertainment and a sampling of what awaits theater and concertgoers in the months to come.

Nine musicians from the Richmond Jazz Society presented a crowd-pleasing rendition of Cy Coleman's “The Best Is Yet to Come,” the Frank Sinatra standard. The always-popular vocalist Desiree Roots Centeio changed the lyrics slightly as a shout-out to the occasion of the venues' opening.

The African American Repertory Theatre brought a handsome, earth-toned stage set to rousing life with the words of Langston Hughes and the beat of pots, pans, trash cans and mops in a tribute to the Harlem of the 1920s, '30s and '40s.

Virginia Opera presented four singers in three scenes from respective acts of Puccini's “La BohA"me,” the company's season opener. While the voices of Derek Taylor, Veronica Mitina, Eugene Brancoveanu and Elizabeth Andrews Roberts were well-balanced with full orchestra accompaniment under the direction of Peter Mark, the projected translations from Italian to English were unnecessary and the garden setting was disconcertedly inappropriate for an opera as familiar as “La BohA"me.”

Barksdale Theatre and Theatre IV (which operate under the same artistic management) closed the program's first half with rousing production numbers from “High School Musical” and “Thoroughly Modern Millie,” a performance with the Latin Ballet of Virginia, and a soaring quartet singing “Climb Ev'ry Mountain” from “The Sound of Music.” When the curtain went up for a final chorus of Rodgers and Hammerstein's secular hymn, however, and dozens of brightly attired singers and dancers from “High School Musical” and “Millie” joined four nuns in full habit, the tableau created a jarring vision of Broadway hell — or heaven — depending on one's aesthetic.

Familiar selections from “Les MisAcrables” by a large, young, earnest and fully costumed cast from the School of the Performing Arts in the Richmond Community opened the program's second half. They gave it full throttle, aimed for the Carpenter's upper reaches and garnered the most thunderous applause of the evening.

If the Elegba Folklore Society's musical and dance excerpt from “Marketplace Suite” mixed a driving African beat with the evening's most brilliant costumes, it also offered one of the evening's most sublime moments. The deep sounds produced by Amadou Kouyate on the kora, a large lute popular in western Africa, were hauntingly memorable.

Another moving moment was achieved by Richmond Shakespeare players as they delivered the Bard's songs and sonnets. Romantic melodies composed by Andrew Hamm and played by the Richmond Symphony melded sweetly with lyrics delivered clearly by actors wearing a wide array of costumes and standing against a night sky of twinkling lights.

After the ballet's enthralling performance, organist Bob Gulledge let rip the theater's Wurlitzer organ with the “Triumphal March” from Verdi's “Aida,” as the sated audience headed into the night.

It was strange and disappointing that the Richmond Symphony played mostly the part of pit orchestra throughout the evening, not making it to the stage. But if the opening-night audience was denied hearing these dedicated and worthy musicians in full acoustical glory amid the goings on, so much the better. The orchestra's moment to shine will come Sept. 26 and 27 when it makes its season premiere with “Carmina Burana.” Let the serious art begin. S

Note: This story contains a correction from the print version in the identification of the song that organist Bob Gulledge played at the end.