For Richmond's longest-running art gallery, it's been a family affair. 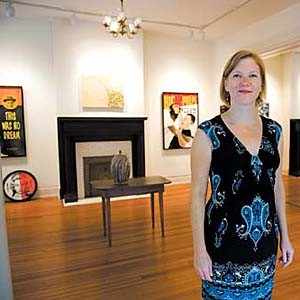 Inside Eric Schindler Gallery, a stately brick house dating to the 1850s that stands at the crest of Church Hill, the hung art is chosen with the intense and committed eye of owner Kirsten Gray. “I used to joke that if my parents had opened up a hardware store,” she says, “I would be in the hardware store to this day knowing everything about drills and hammers and nails and the whole art of it.”

Celebrating its 50th anniversary, the longest-running art gallery in Richmond originated with Kirsten's artist parents, Anne and Ralph Gray, who began showing their work and that of friends at a studio on North First Street. In those days, it was simply called the Gallery.

In 1965, they moved to the current spot at 2305 E. Broad St. and became the Eric Schindler Gallery, named after their first son. Daughter Kirsten came along two years later and, in a sense, never left. The gallery has since maintained a consistent reputation as the place to find interesting local art.

“The things I appreciate most about the Schindler Gallery is that it is comfortable, unpretentious, and consistently showcases some of the best local artists,” patron Chris Fultz, of SMBW Architects, says. “The gallery is a reflection of Kirsten; she is a very down-to-earth and passionate champion of local artists. Art is in her blood and she is committed to making art accessible to everyone. … She promotes the artist, not herself or her gallery.”

Gray has been immersed in this field her whole life, from living above the gallery for some of her early years to dusting it and cleaning the floors when she was in high school. “I was my mom's maid,” she says, laughing. But she absorbed everything, watching as her mother scoured antique shows, looking at and living with art every day.

She says it took a long time before she could find anything at the shows her mother was interested in buying. “For years everything I picked out was bad,” Gray says. “She wasn't nice or gentle about it, either.” At last Gray found something her mother deemed worthy of purchase: a small painting, the details now forgotten but not her moment of triumph. 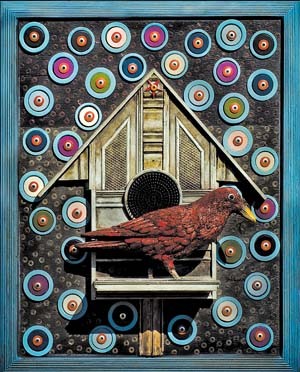 Gray attended Virginia Commonwealth University while cleaning the gallery and boxing up the antiques her mother became increasingly interested in. When she graduated from college in 1992 with a degree in history, her mother was down to carrying a few living artists and agreed to let Gray curate the gallery's contemporary art. While she worked on acquiring her stable of artists, she also cut bagels and did the dishes at a coffee shop in Shockoe Bottom.

After a few years of this, the storm of Dostoevsky and a bad show galvanized Gray. “I had a horrible group show up that I let in and I did not curate,” she recalls. “I lived upstairs, so I had to pass by it all the time. At the same time, I was reading Dostoevsky, which gave me a big kick in my ass to do something with my life. I was also starting to work with some really good artists and I remember shortly thereafter I quit my coffee shop job. I didn't ever want to do that again. All I knew was I needed to get serious.”

“I think Kirsten has always forged her own path,” says ceramicist and architect Lisa Taranto, founder of Tricycle Gardens. “I think in the art world there's a lot of people looking over each other's shoulders to see what other people are doing and I don't think Kirsten does that.”

Gray values her relationships. “One of the things I love is getting to know an artist over the decades,” she says. “I see them in their work. I know their life story parallel to their artwork. You talk about really getting some deep meaning in art? That's incredible. You see their sincerity and honesty and how real it is.”

Another member of her stable, sculptor and painter Jamie Pocklington, puts it this way: “The thing that Kirsten does that nobody else does is that she really fosters her artists and brings you up and keeps you on as long as she sees you're still heading in the right direction. … I don't think anyone else is fostering Richmond art like Kirsten does.”

“One thing I want everyone to know is that in this city we have artists as good as anywhere else in the world,” Gray says. “People come from Florida or California or New York to buy because they know this is as good or better as anything they see in their town. Richmond needs to have some self confidence in its own local art scene. I think it has low self-confidence and it needs to stop doing that.”

View information on the gallery at ericschindlergallery.com or call 644-5005.