Scenes from a Malt

Richmond's newest brewery is getting its hops in order. 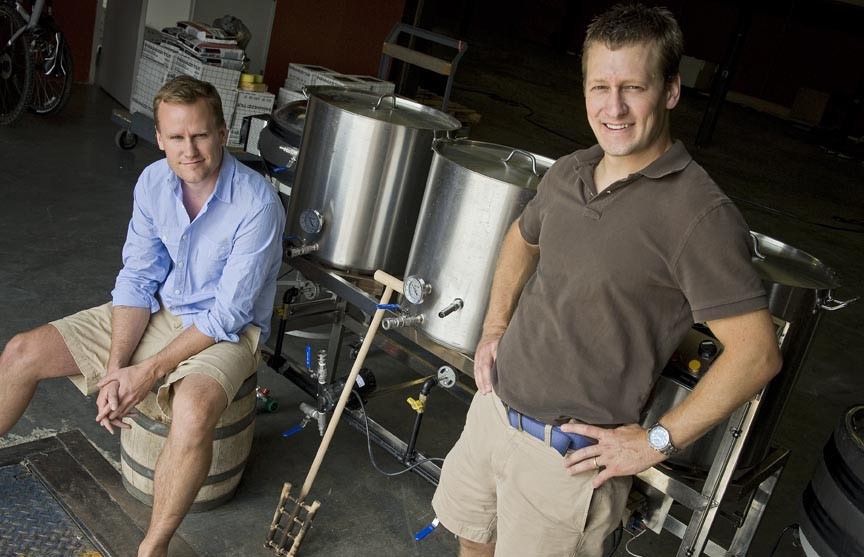 Hardywood Park Craft Brewery doesn’t have a sign yet, but astute observers will notice a fringe of barley along the flower bed near the brewery’s door and a dozen hop plants climbing strands of twine up the front of the building. Two feet into a 30-foot journey, the vines seem resolute.

For Eric McKay and Patrick Murtaugh, who’ve known each other since childhood, opening their own brewery is the culmination of a journey that began with a moment of epiphany 11 years ago on a farm in Australia’s outback, when they drank beer the farmer had brewed for his family.

“It was the best beer I had ever tasted,” McKay says. “We want to help people have that sense of discovery.”

While Murtaugh studied the brewing process in Chicago and Munich, Germany, McKay earned a master’s in business administration. But neither stopped brewing, creating and experimenting with recipes.

Next came a business plan, investors and a big empty building on Ownby Lane. Their 20-barrel brew system will arrive any day now, and the two men expect the brewery to be operational before the end of the summer.

The Hardywood Park flagship beer will be a Belgian blond, in the manner of an abbey ale. “We put a lot of thought into what would work well with the climate and the heartier meals and seafood” in Virginia, McKay says.

After establishing their presence locally, the two plan to offer other varieties, possibly even on a batch-by-batch or seasonal basis. They say they want their beer styles to complement, rather than compete with, what people can get from Legend Brewing Co., the 17-year-old brewery on Richmond’s South Side.

Legend, in fact, is expanding its capacity to produce more than 15,000 barrels annually and distribute its beers in North Carolina and possibly Florida, according to Rick Uhler, vice president of sales and marketing.

Although Hardywood Park will not sell beer on site, the brewery will be open for tours. McKay and Murtaugh are working on a front room that will function as a sort of way station for beer education, where visitors can taste beer under development, discuss recipes and take classes.

Richmond consumers’ interest in craft beer — beer from breweries that sell fewer than 6 million barrels annually — has exploded in the past year, says retailer Robert Kocher, owner of Once Upon a Vine. He credits bars such as Capital Ale House, Commercial Taphouse and Mekong for emphasizing quality beers.

When All About Beer magazine announced in May that it was canceling Richmond’s World Beer Festival planned for June 18, local enthusiasts were disappointed. On the other hand, “you can’t turn around without hearing about another beer dinner,” says Eric Delia, a marketing specialist with Global Beer Network and a blogger at Relentless Thirst. Such events “are still drawing a good amount of new people,” a sign that there’s room for growth in the Richmond market.

But things won’t be easy for new breweries. Richbrau closed in February 2010 after 17 years in business. But McKay figures Hardywood’s focus on education is crucial. “The rawest reason for teaching people about craft beer is to address the question, ‘Why should I pay more for this?’” S