Ingredients like corn, mushrooms and cheese add a layer of complexity to ice creams.

Scott Elmquist The chanterelle mushroom semifreddo, available at Longoven, offers a savory and smoky take on a classic Italian dessert.

Corn was my gateway flavor. As a person with a minimal sweet tooth, I was drawn to the myriad corn options in an ice cream shop one summer afternoon in rural Mexico. The elote flavor I tried was rich with corn's inherent sweetness, but also its vegetal earthiness — more cornmeal than corn syrup.

That may sound crazy. But if you like salted caramel, you already know how well savory and sweet can dance together.

Admittedly, not every savory ingredient works. "The flavor needs to have a natural sweetness to it," Phelan says. "Or be able to play with sweet really well." For example, thyme and blueberry are a classic savory-sweet pairing. Also cheese and apples.

Currently Longoven offers a chanterelle mushroom semifreddo, which is a creamy Italian frozen dessert, with a smoked milk chocolate panna cotta sprinkled with salted pine nuts and chicory powder. The chanterelles are an ode to late summer, while the smoky, salty chicory hints at the coming fall.

"When something is cold, the flavor needs to be intense," Phelan says. "When I'm making an ice cream base, I taste it and make sure it's extremely potent. Sometimes it's almost too strong."

Agreed, her mushroom ice cream on its own is pretty weird. I wouldn't want a bowl of it. But each bite paired with the milk chocolate starts off earthy and rich with some salty crunch, then finishes with the smooth chocolate sweetness. The savory sparks your taste buds to go back for more.

The options are limited if you're looking to try savory ice cream in Richmond, but you can get your funk on by making it at home. We recently got an ice cream maker — the first flavor we made was blueberry and roasted corn. 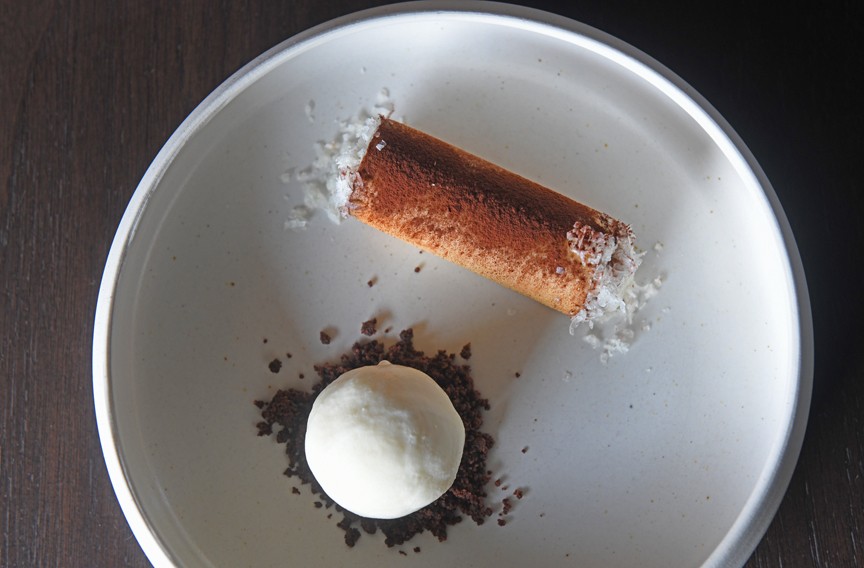 This recipe from Megan Fitzroy Phelan of Longoven makes one pint, and would pair well with a fruit pie or cobbler.

Combine milk, cream and corn syrup in a large, heavy saucepan. Bring to a low simmer.

In a large bowl, combine sugar, eggs, milk powder, stabilizer and salt. Whisk in the warm milk mixture. Place the mixture back in the pot and simmer over low heat, stirring constantly, until thickened. Remove from heat, pour into a container and blend well using an immersion blender. Add cheese, and mix well with blender to incorporate.

Chill mixture for at least four hours or overnight. Strain mixture before chilling in the ice cream machine.

Back to the Ice Cream Issue