A lifelong, self-taught artist leaves his investment firm and gets his first show at Reynolds Gallery. 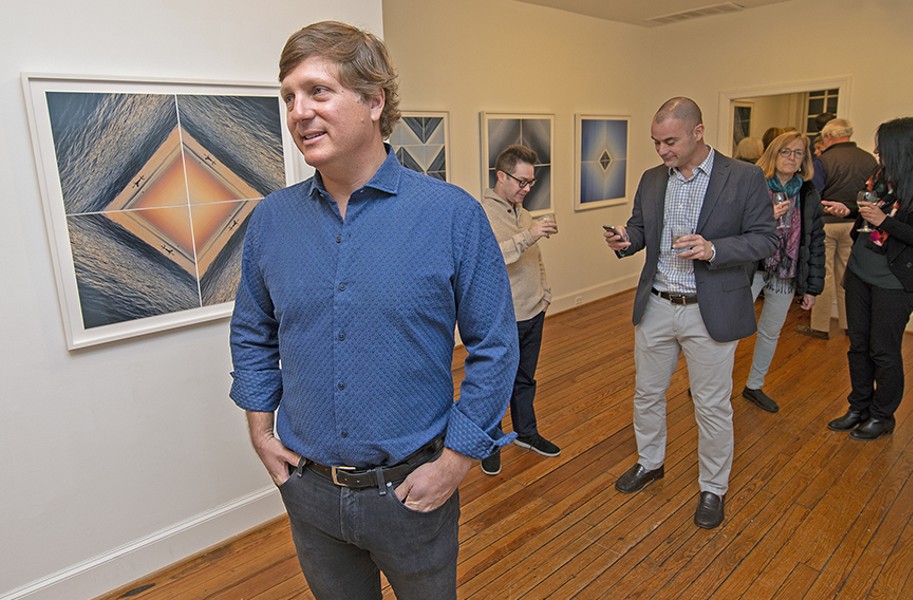 Ash Daniel Barry Purcell comes from a long line of family artists: He told guests at his Reynolds Gallery opening that his great-great-grandfather taught art at Virginia Military Institute during the Civil War.

Barry Purcell has loved making art his entire life, but he’s taken an unusual path to arrive at his first big local show.

Most of his life, he’s been a star athlete and an executive at an investment management firm.

A graduate of Collegiate School, Purcell took art classes at the University of South Carolina, where he was a soccer star on full scholarship. One of the reasons he abandoned his art major were the odd looks he received showing up to classes dressed like a jock in sweat clothes. “I felt out of place, bottom line,” he says.

Purcell would transfer to James Madison University in fall of 1993, where he earned All-American status as the soccer team’s goalie and captain, a team ranked second in the nation. After college, he played one year of professional soccer for the Richmond Kickers. But he loved painting, he says, and never stopped.

After college there was business school and law school, then trips to Asia before Purcell began working for a hedge fund in association with Blue Pool Capital, now the family office for one of the founders of Alibaba Group, a Chinese multinational conglomerate. Purcell spent the next decade working in the high dollar finance world.

The Richmond Times-Dispatch once published a story about him after he saved the life of a woman who was choking on her lunch during a business meeting at the Berkley Hotel. As she turned blue and others stared, Purcell leapt to her aid and applied the Heimlich maneuver. The kicker? She was a nurse at Virginia Commonwealth University who taught emergency medicine, including the Heimlich maneuver.

Three years ago, Purcell’s life underwent a major upheaval that would find him turning to his life-long love of art to make sense of it all.
In 2016, he had decided to start a private investment firm, not knowing he was about to lose several close family members including his mother, grandmother, an uncle in a plane crash and an influential mentor, he says.

“Ultimately, I found a different perspective,” he recalls, noting that he went on vacation with his family. “I was feeling shook up, and I was taking a lot of photography. Really staring at a lot of it, manipulating it into these photo collages.”

Much of this work can be seen in his new show at Reynolds Gallery, “A Place and Time,” which involves tiled iPhone photos that combine images of nature and family in geometric patterns that require close viewing. Each colorful work represents one moment and features the latitude, longitude, day and time the images were taken.

“Your reality is comprised of your failures, happiness, all that creates what you see,” he says. “But when you can really break it down and look at things like the ocean, I forget about that stuff and focus on what’s immediately in front of me.”

After some encouragement at Rick’s Custom Frame and Gallery, and a corporate contact at Capital One who bought some of the work, Purcell now has his first big show at the Reynolds Gallery for most of December.

“‘A Place and Time’ presents a series of deeply saturated photo collages. The works are comprised of repeated photographs, each captured from a dramatic perspective,” notes Alice Livingston, director of Reynolds Gallery. “The gallery has always focused on exhibiting emerging artists, and we are proud to support Barry in his new focus.  Barry’s first career has developed an incredible network of friends and supporters, and we are excited that Reynolds Gallery can serve as a connector between that community and Richmond’s contemporary art scene. We have guests tonight coming in from Hong Kong, New York, and throughout the East Coast.”

Purcell, a previous Style Top 40 under 40 winner who helped start the Massey Alliance at VCU’s Massey Cancer Center, is still active as an investor. He’s also the vice chairman of the JMU Foundation’s board of trustees.

“But I’m really excited about getting back to art,” he says.