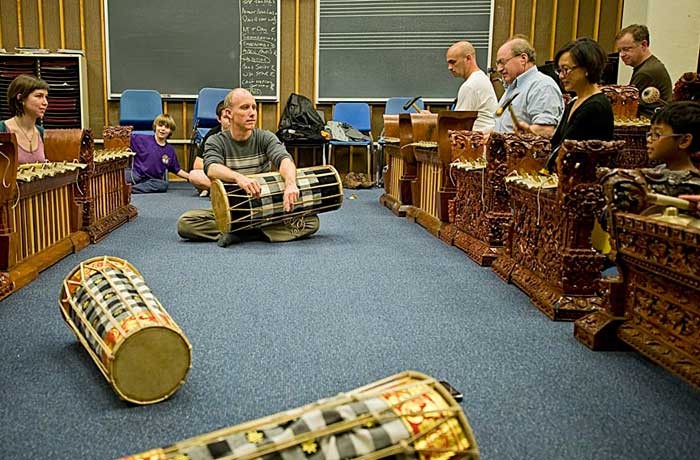 On a recent weeknight, a rehearsal space deep in the basement of the University of Richmond's Booker Hall rings with cascades of chimes and gongs, weaving rhythm from chaos and crafting meditative, repetitive melodies evocative of the works of Philip Glass.

About 20 Richmonders, most of them recent college graduates in their 20s, are arrayed on the floor, sitting behind what appear to be elaborately carved wooden altars decorated with flower petals and demonic faces. They strike the chimes of their bronze metallophones with bamboo hammers, their heads resembling large ivory fangs. Like cobblers mending shoes, they tap away hypnotically, quietly subsumed by their own rhythms.

This is Richmond's Gamelan Raga Kusuma. An ensemble that plays traditional Indonesian music, it was founded by Andrew McGraw, an assistant professor of music and ethno-musicologist at the university.

Tapping out a melody during one of the group's twice-weekly practices is Balinese native Wayan Mastriyana, who evaluates the credentials of international students at Virginia Commonwealth University's admissions department. He and his son, Vidya, 10, attend practice together at UR every Sunday.

Because it's impractical and expensive to travel to Bali, Mastriyana says, Gamelan Raga Kusuma helps him "introduce some part of our culture to my son."

As a teenager in Bali, Mastriyana performed in a small gamelan orchestra. Gamelan groups typically play at Hindu religious ceremonies, such as weddings, funerals and temple festivals. "The gamelan accompanies all those rituals," he says. "If you go to church, there's someone playing the organ, right? In Bali, if you go to a temple ... the community gamelan play. In each village there is at least one or two gamelan orchestras."

The instruments are all hand forged and carved by master craftsmen, constructed from teak and bronze. The term gamelan refers to both the collection of instruments and the performance ensemble.

Mastriyana is grateful to McGraw for providing him with a unique father-son bonding opportunity, he says: "To have somebody bring our culture here, that meant a lot."

McGraw, 37, found Indonesian music by way of Kansas City, where he grew up playing jazz percussion in local garage bands. He became enamored while traveling through Indonesia as a college senior in the 1990s.

What intrigued him most about the gamelan tradition, he says, was that "the music is organized around community. The music is constructed such that everything interlocks. You can't play anything by yourself, so there really isn't this individualistic, virtuosic tradition." Instead of cloistering yourself for hours at time to practice, he says, "in Bali, you have to play as a band and so I found that very refreshing and different, and social."

McGraw went on to earn a doctorate in ethnomusicology from Wesleyan University and has taught at UR since 2006. Recently returned from a fellowship at Cornell University, where he taught a musical avant garde course, he's writing a book about experimental Indonesian music.

He was commuting to play with a New York ensemble from the Indonesian consulate in New York when he decided to form the Richmond community ensemble, Gamelan Raga Kusuma, in 2007. After bringing the Manhattan ensemble here to play, he began holding workshops to teach gamelan percussion and found overwhelming interest in forming the local group, especially among VCU graduates and art students. Members at a recent rehearsal included Adrienne Kerr, a 21-year-old senior majoring in creative advertising, and Chris Bohl, the guitar and orchestra teacher at Chesterfield County's Carver Middle School. His sons, Connor, 15, and Joshua, 8, also perform in the gamelan.

A selling point of the gamelan ensemble is that it doesn't require great musical proficiency or even music literacy, McGraw says. There isn't sheet music. Individual members of Richmond's Gamelan Raga Kusuma range from 9 to 60-something. Anyone can join in with minimal instruction, and the practices are equal parts musical performance and social function.

"It catches people's attention because it's community music," McGraw says, and "if you can count eight beats and hit something, there's a place for you."

Gamelan Raga Kusuma will play Gallery5 on Feb. 11 at 7 p.m., accompanied by leading Javanese vocalist Peni Candra Rini and dancers from the Indonesian embassy. Traditional Indonesian foods will be served and a silent auction will be held to help pay for the Richmond ensemble's upcoming trip to Bali. For information go to gallery5arts.org or ragakusuma.org.