A Richmonder is organizing independent venue promoters to help the concert industry survive. 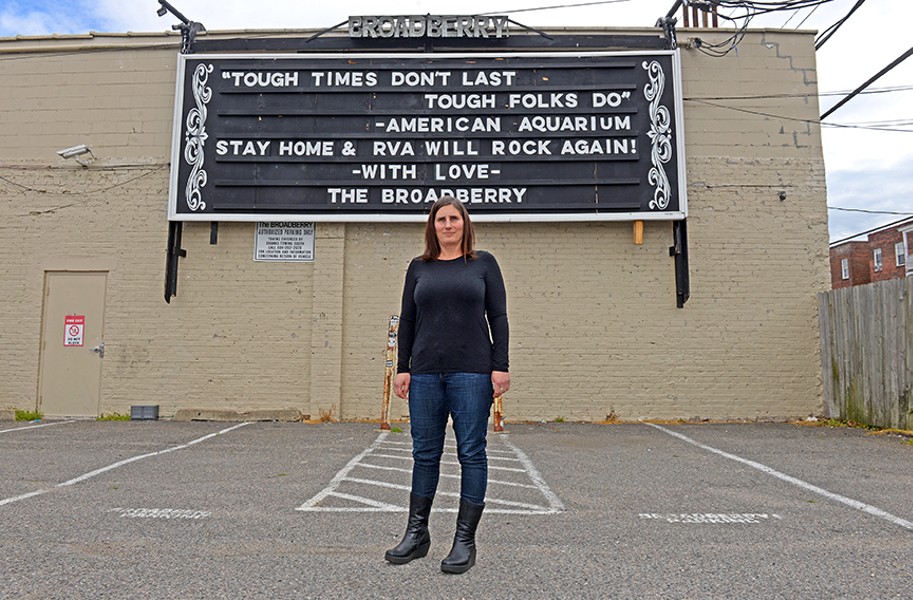 Scott Elmquist Jessica Gordon, started the Independent Promoter Alliance to provide professional support and education through the pandemic and beyond: “We’re trying to break down walls of secrecy and share strategies to help everyone,” she says.

Before the pandemic changed everything, Richmond was known for its burgeoning live music scene with a variety of different-sized clubs holding shows most nights of the week. But what will happen to live music in the age of coronavirus when we return to some semblance of normal?

Richmond promoter Jessica Gordon, who is co-owner with Lucas Fritz of Broadberry Entertainment Group, which books several local venues, is doing her part to make sure the concert industry survives. Along with friend Dave Poe of Patchwork Presents/Ineffable Music group in New York, she recently started the Independent Promoter Alliance, a professional organization for talent buyers and promoters of midsized to large venues, defined as places or events for 200 to 4,000 people.

The two had discussed the idea dating back to before the pandemic, but now it’s become urgent: In just its first three weeks, the alliance has grown to over 300 members around the country and received national coverage in noted industry publications Billboard, Pollstar and the top podcast, Promoter 101. Organizers have since unveiled a website and started filing for nonprofit status.

“We’ve even had three different [music industry-related] companies reach out who want to give us money,” Gordon says of the sudden growth, declining to name the interested companies yet. “There’s a real need to create a network and support system to talk about ways to get through this, strategies on how to come out alive. I’ve postponed over 100 shows in the last four weeks since [the pandemic] began.”

Gordon explains that ticket companies such as Eventbrite, Etix and See Tickets have exclusive relationships with talent buyers and venues: The promoter or venue signs a multiyear contract with a ticketing company for all events. So when the global pandemic led to most events being canceled, ticket companies, venues and promoters all lost their main revenue stream. Since the major promoter Live Nation owns Ticketmaster and AEG owns AXS, independent ticketing companies want independent promoters to survive because they are their main clients.

The alliance may have been born out of the crisis, but Gordon says its goal is more long-term success for promoters and talent buyers by providing a platform with industry-specific dialogue, educational resources and conferences.

“Promoters have traditionally been siloed, where we’re encouraged not to speak with each other: We’re competing with each other for shows. But every field I can think of has multiple professional organizations. And this industry involves a lot of money.”

The concert field does have Pollstar, which Gordon describes as broad in its reach to promoters, labels, managers, booking agents and others. Another organization, Independent Venue Week, was founded in the United Kingdom and started in the United States in 2018 to promote independent venues. Over the last few weeks, it created a nonprofit called the National Independent Venue Association, which is lobbying Congress for funding on behalf of 800 concert venues.

“Venues are going to be closed for longer than anyone else, and a lot will close permanently if they don’t get funding,” Gordon says. “If the venues don’t survive, there’s no point in talking about anything else.”

Gordon’s partner Poe says he believes that entertainment and venues – as well as artists, musicians and comedians — deserve federal dollars as much as restaurants and professional sports teams. “Right now, we’re just waiting and hoping,” he says.

When the health crisis is over, the alliance board plans on creating internship programs for novice promoters as well as educational courses on topics such as innovative social media promotion.

What About That Ticket You Bought?

As many Richmonders who bought concert tickets before the pandemic already know, most shows have been postponed or canceled.

The general policy most venues have taken is that if a show is canceled, there is an immediate refund. But if a show is postponed, the ticket money is held until a new date is announced, then the customer has a certain number of days to request a refund if the newly scheduled date does not work.

Lucas Fritz, co-owner of the Broadberry and talent buyer at venues like the Camel and the Richmond Music Hall, says most of his shows were postponed.

“We did have a couple larger shows, international shows, that ended up canceling altogether, because there are more moving parts when touring internationally,” he says.

When not rescheduling, Fritz has been putting together a curated live stream series, Couchella, to “keep providing the customer base with live music” — featuring new shows from local bands without audiences, as well as archived gigs.

As soon as the Richmond venues announce a postponed date, Gordon says, they notify customers and give them seven days to request a refund.

“We’ve had to [manually] process those refunds ourselves,” she says.

But a major concern is the ripple effect that would occur if the ticket companies go out of business, leaving local promoters holding the bag.

Recently, the alliance played host to a Zoom call between Julia Hartz, chief executive of Eventbrite, the largest event platform ticket company in the world, and over 150 members who are Eventbrite clients. They were concerned after much of Eventbrite’s music department was recently laid off.

“They are bigger than Ticketmaster and they laid off 45% of their staff,” Gordon says, adding that clients were told Eventbrite would be moving to a self-service model. “That’s not conducive to what we do. Your ticket company not only does all your ticketing but powers your website. So not having customer support would not be effective. I would talk to them every single week.”

There were other worries expressed during the call: Eventbrite also canceled its usual payment procedure from rolling payouts, in which money goes to promoters as tickets are sold, which Gordon says left thousands of promoters with no money to pay their bills. She notes that there is a lawsuit underway against Ticketmaster, which changed its refund policy for postponed shows.

“We all agree — the promoter, ticket company and venue — that the money is the customers’ money. What we’re concerned about is the ticketing company going out of business and how would customers get their money back?” Gordon says. “We’re talking millions of dollars. What we don’t agree on: Who is best equipped to hold that money now? Because ticket companies are going to go under.”

So how does Gordon see the future of live music in Richmond panning out once people start going back out?

It’s tough to speculate, she says, but she does know two things: Due to job losses, many people will not have disposable income for entertainment, yet at the same time the markets are going to be oversaturated with rescheduled events.

“[In the fall] we have 10 to 15 holds on almost every date, especially in the small rooms. There are going to be shows every single night in every single venue,” she says. “With people having less money to see things, that’s a huge problem.”

Fritz says the midsized venues he works with are pretty well-positioned to survive the pandemic, but it’s going to take a lot of work.

“It’s going to come down to how our states and localities handle testing, how quick a vaccine comes, how quickly people can feel safe in groups,” he says.

Poe knows that ticket prices will be tough for some people, but also thinks there will be less new tours in the fall dependent upon medical news regarding the pandemic. Not all the shows will confirm, some will push to 2021, he says.

“Whenever the pandemic ends, we will have to be creative in how to survive,” Poe says. “Overall, margins aren’t huge and we need every show at full capacity to survive, even while we have limitations to operate.”

However, Gordon notes that these extremely tough times, which have given rise to groups like the Independent Promoter Alliance, have created a sense of solidarity and hope.

“When we come out of this, we will have a network of people that will be talking, which I believe will have a massive impact on our industry for the better — that’s good for everyone.”