An inner-city swim team is breaking the racial barrier — one save at a time. 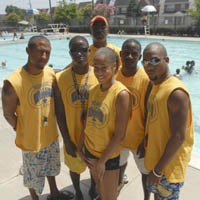 Shortly after the tragedy, he vowed to become "a master swimmer."

But there were obstacles, like skin color. Hodges, who is black, received his lifeguarding certificate in the late 1970s, but didn't feel welcome when he applied during summer break for a lifeguarding position at Virginia Beach, where all the lifeguards were white.

The 47-year-old is quick to add that he didn't commit himself to landing a job as a beach guard, but his feelings were well-founded. He remembered his parents' segregation stories. "They used to tell me that there was a black beach and a white beach," he says. "Virginia Beach was a white beach."

Hodges, however, kept his goal alive. He settled in Richmond after graduating from Virginia Union University with a bachelor's degree in recreation and parks, and took a job as a swim instructor at the university. He went on to learn coaching at the Olympic Training Center in Colorado.

The Cup, hosted by the Prince William County Park Authority, brought together Richmond with teams from Herndon, and the counties of Stafford, Fairfax and Prince William. It tests lifeguard skills with brick diving, rescue-tube relays and buoy tosses.

David Hoover, a member of the Richmond team, attributes his group's success to teamwork. "We had fun with each other because we know each other so well and the chemistry was there," Hoover says. "We just knew our stuff."

It's likely they know their stuff because of the countless hours of training they've received from Hodges, either through their years with Richmond Racers or as students in his lifeguard-certification course.

The students' jobs contrast with those of lifeguards at suburban pools in the West End and Midlothian because of a cultural divide: Inner-city youth, most of whom are black, traditionally have access to fewer swimming lessons and pools, like their parents before them.

The race gap is reflected in competitive swimming, too. No black joined from the U.S. Olympic swim team until 2000, when Anthony Erwin swam to gold in the 50-meter freestyle.

"We want to see [minorities] competing at the competitive level," Cruzat says. He plans to tackle what he deems three "critical areas": the drowning rate, "health and wellness," and academic achievement. He also worries that "urban centers in particular are starting to close pools at an alarming rate."

It's not for lack of interest. Swansboro Pool, where the Richmond Racers practice, has long been a magnet for community children. "We have a waiting list," says Mike Hodges of Swansboro's swimming-lesson program. "We have to turn kids away."

With several of his students gathered around him at Swansboro — Morgan Whitaker, A.J. Jasper and David Hoover, all lifeguards for the Richmond team — Hodges reflects on the state of inner-city lifeguarding: "These guys are guarding pools with a lot of non-swimmers. We make saves all the time."

Hoover, 20, who manages Bellemeade Pool, says he's made about five saves in his short career as a lifeguard. Hodges, who has been lifeguarding for 25 years, says he's made more saves than he can count. This is the primary difference between the packed inner-city pools and their country-club counterparts.

Often inner-city parents aren't supportive of their children when they express an interest in swimming, Hodges says.

"That's the case with most of our inner-city kids … they don't have [parental] support," Hodges says. His students, however, are exceptions. Jasper, 17, says he feels like a "leader" when he lifeguards. "My grandma … she's like, too proud of me," he says. Under Hodges' tutelage, the tradition will continue.

Hodges looks over at the team's youngest member — smiling 16-year-old Morgan Whitaker — and seems to beam with pride. She, too, will save lives one day soon, he predicts: "She hasn't been in the water yet. But it's comin.'" S