New theater group shows its ambition with a long but well-done O’Neill. 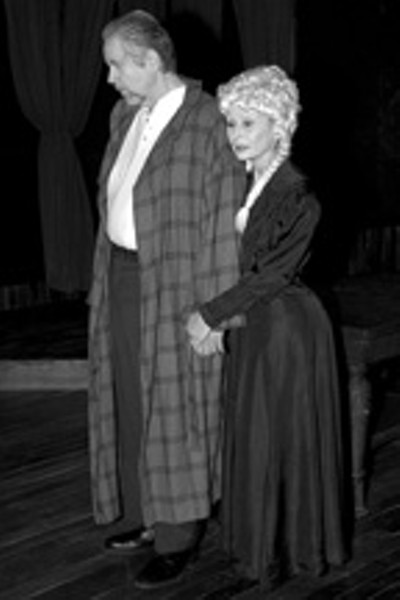 Repeat several hundred times and you have a four-act, four-hour play about the disintegration of an American family. And a lot of drunken characters.

The play takes place in a single day in 1912 in the Tyrone summerhouse. James Tyrone Sr. is a flamboyant actor, past his prime. Now he spends his time fretting about real estate and his bank account. His wife, Mary, profoundly unhappy with her life, struggles with morphine addiction. Their two sons are infantile, but in much different ways. The oldest son, Jamie, is an actor without the success of his father. The younger son, Edmund, is sensitive to a fault. Both are excessively fond of the bottle.

You wouldn’t be able to watch this play if it weren’t for gifted actors. O’Neill’s script certainly has plenty of subtext, but it’s only a millimeter below the surface. Many performers would not be able to resist the temptation to work it for all its worth. By and large, this cast does a wonderful job of resisting the temptation.

This is just the second production by the Essential Theatre. The first, “Big Town,” was a tight, professional piece of work. Here, Daniel Moore’s direction is similarly straightforward. He doesn’t resort to any of the stunts common to productions of O’Neill: speeding up the dialogue or slicing out major sections of the play. If we’re going to take our medicine, we want the full measure.

Matthew Costello and Mary Sue Carroll do not share a natural chemistry that would allow us to understand why the Tyrones were together in the first place. But they’re both talented professionals and they make their characters come to life with considerable craftsmanship. Costello is particularly good when he torments himself over the cost of burning a single light bulb.

As Jamie, Beauregard Marie does a masterful job of fitting into the script’s time and place. I’ve seen him perform this trick in other productions during the last few years. In this play, his drunken scenes are good because they’re far more difficult than he makes them look. In fact, his work is so seamless that you never quite realize how good he is. He deserves more leading roles around town.

As the youngest son, Derek Phipps does a good work as the baby who’s never been allowed to grow up. Audrey Stubblefield also has a nice turn as Cathleen, the servant with the booming voice.

The production is first-rate. The set and costumes fit the time period nicely. The neo-Gothic space at the Second Presbyterian Church adds to the religious overtones in the script. The only quibble is Mary Sue Carroll’s wig — it looks like the love child of Barbara Stanwyck’s hair in “Big Valley” and Harpo Marx’s.

Somehow, despite the repetition and the excessive length, the show succeeds. Perhaps the repetition triggers an electrochemical response in the brain leading to increased satisfaction. Or maybe it’s simpler than that. Once a cast and audience have put nearly four hours into a play, there’s probably an instinctive desire to make the most of their investment.

This may not have been the best play selection for an embryonic theater company. But you really should take advantage of the bravery. O’Neill’s plays are rarely produced in this area, so here’s your chance to see a fine production of an American classic. S