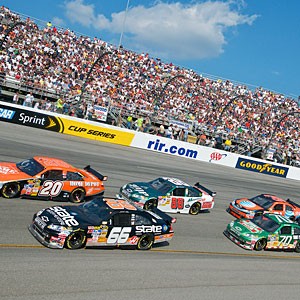 Is there a threat to the throne? The three kings — to the uninitiated NASCAR fan, that's Richard Petty, Budweiser and Elvis — are losing their grip on the Old Dominion, judging from a desperation call last week from the Richmond Metropolitan Convention and Visitors Bureau.

Richmond's only tourist juggernaut, Richmond International Raceway's two NASCAR races in the spring and fall, is slipping. Attendance is down, in part because of the slumping economy and a midlife crisis of sorts for stock-car racing, long the most popular spectator sport in the country.

The visitors bureau sent out a letter last week to “tourism stakeholders” imploring the region to get out and support NASCAR: “We are not in crisis mode, but we are declaring a Call To Action,” the letter reads, asking for support in the form of “buying four tickets, which start at $45 each” to the races in 2011.

“NASCAR is so valuable to the community, we have just gotten a little complacent about it,” says Jon Lugbill, executive director of Metropolitan Richmond Sports Backers, who also signed the letter. “This is something that our community should never lose.”
Are we really in jeopardy of losing NASCAR, which, according to the visitors bureau, pumps $414 million into the local economy annually? Maybe. NASCAR has seen attendance at races decline precipitously during the last couple of years. While actual numbers are difficult to come by, according to NASCAR attendance nationwide declined from 4.4 million in 2007 to 3.8 million in 2009; 2010 attendance figures are expected to erode further.

The sport has seen television ratings decline as well, continuing to lose the interest of a key demographic: 18- to 34-year-old men. Among that age group, television ratings are down 29 percent, Fox Sports' chairman, David Hill, told the Sports Business Journal earlier this summer.

But the numbers don't tell the whole story. Race weekends are typically the biggest of the year for local hoteliers, and the last two years have been ominous. P.C. Amin, the region's biggest hotel operator, says hotel occupancy during race weekends has dropped off significantly in 2009 and 2010.

“Last year was a disaster — it was very, very poor,” says Amin, speaking by phone Monday while vacationing in Baroda, India. In years past, it was common for 20 of his 30 Richmond-area hotels to reach 100 percent occupancy when NASCAR came to town. In 2009, his hotels, including seven near Richmond International Airport, reached a paltry 55 percent occupancy. This year's fall race weekend saw a slight improvement, he says, when occupancy was 65 percent to 70 percent.

Amin says the drop-off in hotel business on race weekends this year resulted in nearly $500,000 in lost revenue.