After a stint in federal prison, one of the city's most divisive political figures plots a comeback. 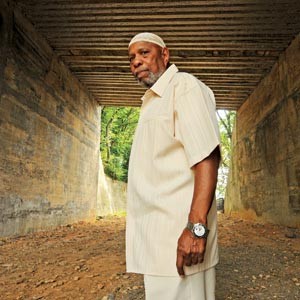 Former City Councilman Sa'ad El-Amin parks his maroon sedan beside the statue of Confederate President Jefferson Davis on Monument Avenue. In the sweltering heat of a recent July afternoon, he climbs out of the car and stands to confront his nemesis, pondering the quotation etched on the monument's inner rim:

Not in hostility to others, not to injure any section of the country, not even for our own pecuniary benefit, but from the high and solemn motive of defending and protecting the rights we inherited. — Jefferson Davis, U.S. Senate, Jan. 21, 1861.

“Kind of arrogant, isn't it?” El-Amin observes. “‘Not in hostility to others.' … OK, well what others are they talking about? They were hostilely taken, my people. … So that's a lie right there.”

El-Amin drives on, past the Robert E. Lee monument, noting how Lee did not free slaves from an estate his wife inherited — “I show that as evidence of his real and true self” — and crossing the Manchester Bridge to the historic Manchester Docks, the starting point of the Richmond Slave Trail.

“It just looks like an abandoned site,” El-Amin says of the dense trees and underbrush at the landing, pondering: Why isn't there a respectful wall obscuring the nearby sewage treatment center? Why does an industrial chlorine tank desecrate the area near its entrance? What real effort has been made to instill gravity and respect here?

There's more, including a visit to Arthur Ashe's grave in Woodland Cemetery, off a road riddled with trash and an abandoned grocery cart. The tour represents El-Amin's renewed fight against the physical reminders of Richmond's slave-trading and Jim Crow past — artifacts that continue to affront and pain many in the black community.

El-Amin stands in stark contrast to the genteel racial conversations encouraged by the likes of the Future of Richmond's Past, the group led by university presidents and museum directors. El-Amin attended one of its meetings and came away unmoved: “They said, you know, we can submit questions in writing. And I say that stinks.”

El-Amin's just getting started. He plans to challenge taxpayer maintenance of the statues on Monument Avenue. As the head of his recently formed nonprofit, the Society for Preservation of African-American History and Antiquities, which he describes as an effort that's “mostly me,” El-Amin plots other lawsuits challenging the status of a number of sites related to African-American history. They're already drafted, he says.

He's taken on monuments before. Between 1998 and 2003, when El-Amin represented Richmond's 6th District on City Council, El-Amin was a divisive activist who successfully lobbied the city to remove a mural of Robert E. Lee erected on the James River floodwall in Shockoe Bottom. He resurrected the city's Slave Trail Commission, roused volatile debates about race and was known for an in-your-face approach to politics — not an unfamiliar reputation for a former litigator for the Nation of Islam who says he was kicked out of Howard University over a lawsuit involving student activists.

“He was one time one of the loudest voices in Richmond,” says Bob Holsworth, a longtime state political analyst and founder of the blog Virginia Tomorrow, characterizing El-Amin as more “lone ranger than consensus-builder type.”

Former Richmond Mayor Rudy McCollum, who held office during the councilman's tenure, recalls El-Amin as an “enigma” — both polarizing and conflicting. In private meetings, McCollum says, “you could talk with him, you could reason with him, he would be very understanding … but once the cameras got rolling, it was all Sa'ad.”

Former state Sen. Benjamin Lambert III, a one-time neighbor of El-Amin's who employed El-Amin's wife, lawyer Beverly Crawford, as his legislative assistant, says that divisive voice also could be a political clarion call: “When things go wrong you need someone who has the nerve and guts to say, ‘Look, this is not right,'” says Lambert, adding that El-Amin had his faults but “helped a lot of people do the right thing.”
“There are people who champion him and there are people who hate him,” says John Moeser, an urban studies professor at the University of Richmond. El-Amin's tactics are often self-defeating, Moeser says, but he's also helped “sensitize Richmond to the fact that there is a whole bunch of history that is absolutely offensive to the African-American community.”

Named Jeroyd Greene Jr. before converting to Islam in the early 1970s, El-Amin was born in New York City, attended college in California and holds master's and law degrees from Yale University. El-Amin first came to Richmond in 1969, setting up a law practice that he ultimately ran for more than 30 years. He's fathered five children over three marriages.

El-Amin is seasoned in personal and professional controversy, but it was during his City Council tenure that things got really rocky. El-Amin surrendered his law license in 2002 following a 1999 Virginia State Bar suspension and investigations into client complaints, and in 2003 he was convicted of federal tax fraud, ending his political career. He spent time in federal prison, minimum-security camps in Ashland, Ky., and near Raleigh, N.C., before transitioning into a halfway house in Atlanta and returning to Richmond in 2006 for a three-year probation that ended last August.

His time in prison was not without action. During breaks between working in a boiler plant and later driving cars for prison staff, El-Amin says he wrote 1,500 pages of an unpublished memoir and read a book every two or three days, many sent to him by Crawford, who currently works as a legislative assistant to state Delegate Delores McQuinn, chairwoman of the Slave Trail Commission. He also underwent triple-bypass heart surgery, offered litigation consulting to other inmates and, he says, filed 15 or 20 grievances for prisoners complaining of race-related mistreatment.

Following prison time, though, “the messenger had been wounded, tainted, disparaged,” El-Amin says. He felt he was no longer the right person for righting racial inequalities. But after a while, “I saw that if I didn't say it, it wasn't going to get said.”

El-Amin's stint in prison doesn't absolve his Internal Revenue Service debts of more than $710,000. Citing penalties and interest, El-Amin says he now owes more than $1 million to the federal government but that the IRS temporarily has suspended collection after reviewing his finances.

El-Amin now works as a litigation consultant, volunteers as a history teacher at a private Muslim school, sells voice-recognition software and serves on the board of Muslim Chaplain Services, an advocacy group for Muslim inmates.

As he sits behind his desk in Muslim Chaplain Services' vanilla-walled Westwood Avenue suite, El-Amin defends his new legal challenges: “This is another front of the civil rights movement, which has not completed its task,” he says.

Later, after criticizing that quotation on the Jefferson Davis monument, El-Amin reflects: “My wife always tells me, ‘You always sound so angry.'”