Santa Claus Is Coming Out

A one-man show at Richmond Triangle Players takes on social norms and the Christmas culture war. 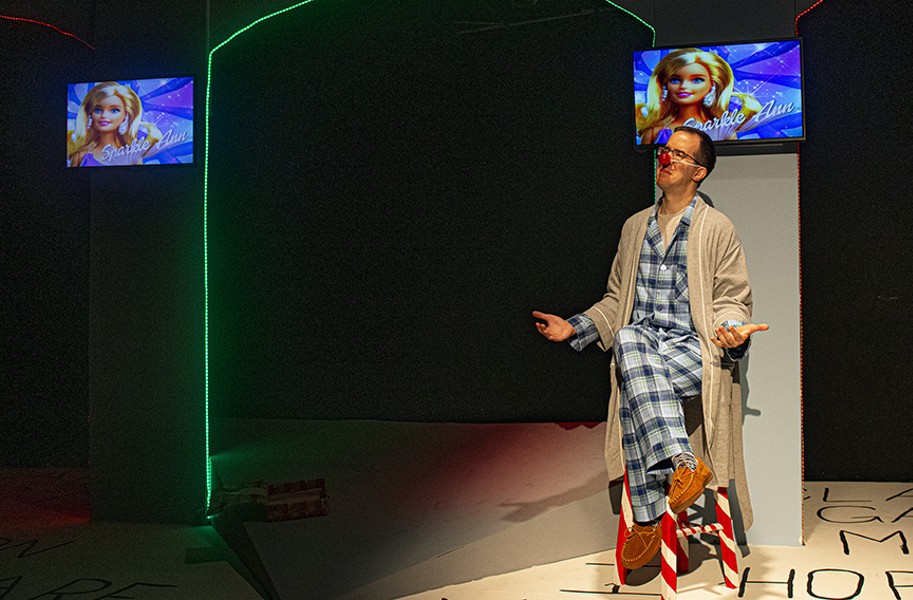 Scott Elmquist Eddie Webster plays more than a dozen characters in the one-man show “The Santa Closet” at Richmond Triangle Players, which will have socially distanced seating and other precautions.

Just like holiday music and decorations, there’s a tradition that rears its head every time the calendar approaches Thanksgiving: the supposed Christmas culture war fanned by conservative media.
For those who support this victimization narrative, more inclusive greetings like “Happy Holidays” are a capitulation to political correctness, as though America isn’t still overwhelmingly obsessed with Christmas.

This holiday season, the Richmond Triangle Players are jumping into the fray with Jeremy Solomon’s one-man show “The Santa Closet.” After a little boy named Gary writes a letter to Santa Claus asking for a doll, the gender atypical request sparks outrage and a denial from the North Pole. Told in a faux-documentary style, “The Santa Closet” is a zany take on coming out and the Christmas culture war.

“It’s very timely, because politically we’re in such a weird environment where there’s such a big divide on what people are valuing in our country,” says Eddie Webster, star of the show. “The conversations that happen with the characters in this are about that. What’s normal? What’s acceptable? What are people willing to accept?”

Though funny, the show also has more dramatic elements, as through Gary’s series of heartfelt letters, Kris Kringle is nudged out of the closet himself. The show’s precursor, Solomon’s “Santa Claus Is Coming Out,” received high marks from The New York Times: “This isn’t a clumsy parody, but a sensitive, imaginative tale that really is about a boy’s realization that he is different,” the it reported.

“The take-away for me is that ultimately Christmas is about what each family makes it to be, that what each family values is separate to that family,” says Webster, who plays more than a dozen characters in the show. “Christmas can be meaningful in many different ways.”

To follow Centers for Disease Control and Prevention guidelines during the pandemic, Triangle has reduced the capacity of its 93-seat theater to 27 socially distanced seats and has taken other precautions.

In consideration of this strange time when there’s a pandemic, a recession and a lame duck president who refuses to concede, Webster says he’s glad to be a part of a fun and heartwarming distraction.

“[Triangle] found a script and are producing a show that will hopefully let people relax,” he says, “and hopefully have a good time.”

Back to The Holiday Almanac