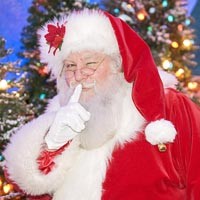 Dale Parris may have bachelor's degree from the International University of Santa Claus, but nothing could have prepared him for his gig at the Bass Pro Shops in Ashland. Here, the kids are a different breed. They ask for guns — even the girls — four-wheelers and, occasionally, farm animals.

The other night a kid asked for a pig. I said, ‘Wow, well that's interesting,'” Parris says, explaining that he's grown accustomed to requests for firearms and hunting-related gifts, but not livestock. “I think it's just this area.”

Parris has played Santa for 15 years, and he fits the part well. He's large and tall, with a round belly and a full-blown natural white beard and a handlebar mustache. It wasn't until 2006 that he started to truly invest himself into training for the part.

“The first few years was just trial-and-error, on-the-job training so to speak,” he says. Then he learned about a convention held in Branson, Mo., by an organization called the Amalgamated Order of Real Bearded Santas. He went with his wife.

Parris also has gone on two Santa cruises with the International University of Santa Claus and appeared all over. His Web site, santadale.com, allows you to track his whereabouts and request his services. Check out photos of Parris with the Geico Gecko and North Stafford High School's Wolverine.

Style: When you decided to play Santa, what kinds of things did you do to prepare? Is there a boot camp for Santa?

Santa: In 2006, I found out about an organization that was called the Amalgamated Order of Real Bearded Santas, and they were having a convention or did have a convention in Branson in 2006, which I went to, my wife and me. There they had a number of classes, which you could sign up and go to. Things like hair and beard; I learned how to do this with my mustache [refers to the handlebar]. Attire — this is one suit, but there are different variations of the suit. If you're Santa year-round, you know, 365 days, then there's different clothing you can wear, Santa off-seasonal wear, and they teach you things like both hands should always be shown in a photo, and some sign language classes. … and how to deal with children who are mentally or physically challenged.

Santa: I think it's just this area. It's a rural area and a lot of people hunt. I live in Stafford County and I do a lot of Northern Virginia gigs, and I don't get girls asking for guns. But here they ask for it because their parents are into it. I mean the girls do it, the guys do it.

What do you do when a kid asks for something really crazy? How do you react? Do you just go along with it?

Santa: I say, “Wow, well that's interesting.” Like the pig. “Wow that's interesting. Now is that a real pig or a stuffed pig?” “No, a real pig, real pig.”  I say, “Well real animals don't travel well on the sleigh because it gets pretty cold out there.” And they have to have a permission slip from mom or dad, grandma, grandpa, aunts or uncles to have a live animal. I say, “Do you think they would give you permission?” And they say, “Uh....” Some of them say, when mom or dad is standing there, “Mommy, will you let me have a pig?” So you just go with it but you never promise anything.

How do you get things like four wheelers and ATVs and all that stuff down the chimney?

Santa: Oh, well, that's the magic of Santa. And you know, some people don't have chimneys, so I have a lot of magic keys.

What about the fire [at Bass Pro] that happened Nov. 21?

Santa: Apparently it wiped out that whole area over there [points to Santa's wonderland] to the point where they had to move Santa for Sunday. The caribou were damaged and they had to replace those, and the trees, well, apparently a real tree caught on fire. The sprinkler system went off and it flooded the section. They were working around the clock on that.

With the economy being as it is, what do you do? Do you feel like kids are asking for less or is it about the same?

Santa: Actually I feel like the children are asking for about the same. Yeah, I will have two or three children come up and I'll say, well what would you like for Christmas this year, and they'll say, well mommy said we can only ask for two things. And I don't know if they're saying that because mommy thinks they need to move on the line or whether they're saying that because there are only really two major things they want them to ask for. But I've had a laundry list. One little child sat there and just kept going on and on. I did like this to the camera [motions to hurry up] and they just kept rattling on this list, and I had both pages filled one line right after another. So I don't think the children are decreasing their requests at all.

When somebody sees you they always smile. Of course, I always have to smile. And I can't do any road rage. No road rage for Santa. I have a personalized license plate that says Santa C., my wife has Ms. Claus on hers. So we're identified where we go. A big red truck with Santa C., it's gotta be Santa.