Salt of the Earth

Kelly Reichardt, one of the country’s finest film directors, walks a dog. 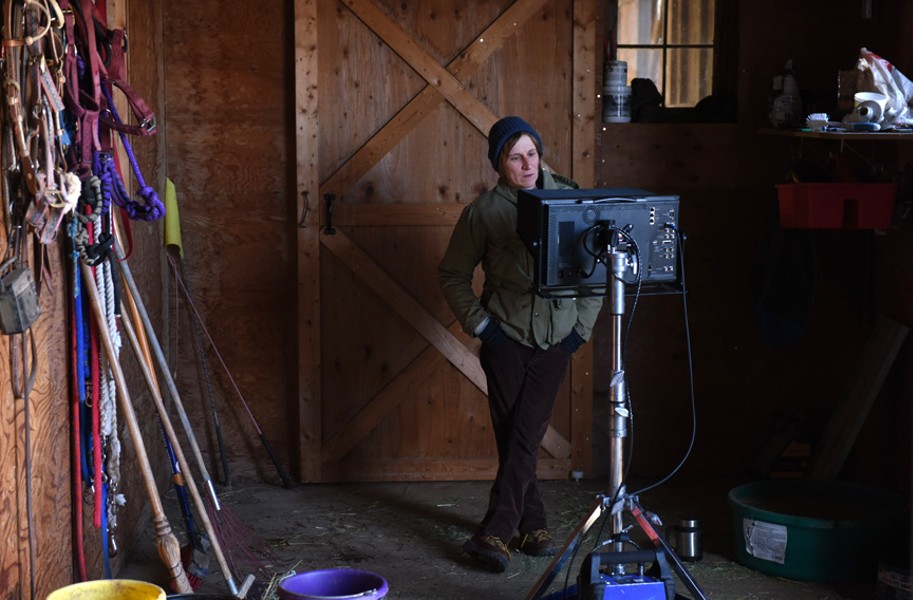 Jojo Whilden/IFC Films Director Kelly Reichardt on the set of her last feature, “Certain Women.” Reichardt will be attending several screenings of her films as part of this year’s James River Film Festival.

Director Kelly Reichardt is walking outdoors in Portland, Oregon with a friend's dog, trudging through the remains of a minor snowfall while trying to untangle her ear buds. In other words, pretty much the same thing a typical character might be doing in one of her slow-moving, highly observant films.

Reichardt is one of the more thoughtful and humanist filmmakers working in American cinema today. She's known for character-driven indie films such as "Old Joy" and "Wendy and Lucy," the latter revolving around a homeless drifter played by Michelle Williams and Lucy, a mixed-breed canine of Reichardt's who bounded through both films.

Sadly, Lucy has since passed away, she says. That might be why Reichardt seems so happy today to have another four-legged companion by her side while doing this brief interview by phone in advance of the James River Film Fest. "This is a friend's dog, Fritz, who usually is in a store window where they have a little factory," she says. "Me and the dog became friends, so I walk him."

In Richmond, the director will show her most recent movie, "Certain Women," which weaves together short stories by author Maile Meloy and stars Laura Dern, Lily Gladstone and Kristen Stewart. Set in Montana, the acclaimed drama (dedicated to Lucy) was described by one critic as "a study in women's uncertainties." Reichardt also will present her films, "Night Moves," a little-known and highly underrated eco-terrorist thriller starring Dakota Fanning, Peter Sarsgaard and Jesse Eisenberg, as well as "Wendy and Lucy."

"My movies always seem like little mini road trips to me," she says. "You're dropping in with someone, spending some time with them, catching up on a few days or weeks of their lives and leaving them where you found them. That sort of ends up being the approach on all of them."

Not long into our conversation, I can hear a large dog barking nearby. Then sudden encroaching voices and our interview halts.

"Oh no, we're being attacked," Reichardt says calmly. Then the line goes dead.

When I reach her a few minutes later, after the encounter has been resolved, she's trying to find a quiet place to talk along the path, which sounds alive with flowing streams, maybe even a waterfall. But cellphones can be deceiving. She's not in the woods yet, she tells me, and the sound I'm hearing is not a pretty Oregon stream, but nearby car traffic in the slushy snow.

"Oh, but wouldn't that be beautiful if it was?" she says. "Write it like that."

Maybe I'm attuned to the sounds because nature does play a pervasive role throughout her film work. Our interview already feels like it could've been an outtake scene from her breakthrough film, "Old Joy," which was built around a long walk taken by two reacquainted friends (and Lucy) to a famous hot spring outside of Portland. I half-expect to hear gentle guitar noodling from Yo La Tengo in the background.

"Oh no, there's salt in the dog's paw," Reichardt says. "They don't even really salt here that much. The whole city is shut down over less than an inch of snow. They're in no shape for the big earthquake to come, I'll tell you that."

To be fair, Oregon couldn't possibly be prepared for the next big one, when the Cascadia Fault, a 620-mile-long fault that stretches from British Columbia to Northern California, finally unleashes a huge quake, which scientists feel is overdue. A longtime New Yorker, Reichardt lives half of the year in Portland when she's not teaching film at Bard College in New York. So she could get lucky.

"I'm a bi-coastal renter," she says, adding that she hasn't been back to Virginia since she was young and her family camped out with their Virginia Is for Lovers stickers. She was raised in Miami, the daughter of two police officers; her mother worked undercover. She began discovering world cinema while attending Tufts University, which set her on a hard-won path to artful filmmaking, international awards and critical acclaim.

Thematically, her movies often explore questions of community and how we treat each other, while featuring working-class characters living without a net. I ask her if this preoccupation reflects her own experience as a struggling filmmaker.

"Gosh, it's so hard to know where everything comes from, right?" she says. "In filmmaking there is a lot of community, we're really out in it, usually in harrowing conditions. … I think the idea of each man for himself is probably contrary to the original thinking of the American dream."

One of the things I love about her work is that it feels thoroughly curious about real life and it's slow and immersive enough to observe the little details. Partly, that's because she likes to give her actors something to do, physically. Her characters often seem mired in a kind of rootlessness but remain resilient. Questions such as "How do you live? What do you do? Where are you supposed to be?" are the ones she is constantly drawn to, she says. She often works with author Jon Raymond because his writing is focused on how the politics of small communities play out. "Because it's too much to take on the bigger themes," she says with a laugh. "And this way we can really focus on the characters."

Around this time, her canine companion is starting to get bold on the trail.

"Uh-oh, hold on Fritz, that's a lot of salt," she interjects, noting that she's about to cross some big levee. I'm listening closely for background noises, imagining a perilous drop and wondering if this call may be too distracting. Which suddenly reminds me of another essential ingredient of her work: her masterful use of sound.

As a film teacher, Reichardt says she uses an interesting exercise where students watch films without the picture, attempting to construct the narrative using only the audio.

"The sound design comes in early when you're location scouting. So trying to figure out the sounds of a place and how you can work them in to create tension, or open up a space that you don't want to open up visually," she explains. "As soon as I start — you have time to sit in places and think about how you make a space work. You can get stuck on that for a while."

She's been lucky to have adventurous sound teams on her films, she points out.

"The sound recordist on 'Meek's [Cutoff]' gave me a 20-minute folder of just fly sounds that he'd recorded in the desert," she recalls. "Once shooting starts, as much as you say it's not all going to be about picture, it's all about picture. You have to hope your sound team is doing stuff on the sly."

She recalls one deleted truck station scene from "Certain Women" where the especially strong Montana winds were creating "a highly musical sound" blowing beneath and between the trucks. "We could never get the other trucks to turn off their engines so we could totally capture it. But [my sound guy] went back a bunch to try, and he got enough that it could be a guide for what we wanted to do with the score."

Richmond native Almitra Corey worked as art director on "Night Moves" and says she learned a lot from working with Reichardt.

"Mostly just how collaborative and kind everyone can be," she says. "She's so damn smart. … She had a clear vision and whatever obstacles came, she handled them correctly. She never blew up at anyone and she came prepared with so many visual and literary references."

Reichardt still shoots on film and has edited all of her work besides "River of Grass." She says that she gears her students, who now have unlimited options with video, toward not shooting too much footage, effectively locking them down. "Editing is a lot cheaper now but people still want to keep you on a schedule," she says. "Myself, I'm more thinking about the cut while I'm shooting. We just don't have film to burn, so it's more restrictive for sure."

Reichardt adds that she really likes the works of Richmond filmmaker Rick Alverson, whom she's met before. While Alverson's films can be more antagonistic in their confounding of viewers' expectations, like hers they can unfold with glacial pacing and intense focus on the characters behavior. Does she think there might ever be a return movement to the kind of auteur cinema that marked the early- to mid-'70s?

"In fairness, those films of the new Hollywood, that was no scene for women. I would never have been allowed to make movies," she says. "But yeah, I don't see things going in that direction. All films are really expensive. Even if you can make one for a million dollars, it's still a million dollars. Unless you're making films about people walking in the forest every time, you need a budget to do anything. Demand is for broader content, not more specific content."

There was a 10-year break between Reichardt's debut film and her acclaimed follow-up, "Old Joy," and she's noted in interviews that the reason was her disillusionment with the male-dominated system. So has she seen anything change for female directors in the current Hollywood climate?

While she's saying this, it appears she's actually gone down the wrong path.

"Now I'm totally lost," she says, laughing. "I'm so bad with direction. I've done something crazy. What did I do?"

While she gets her bearings, we chat a bit more about film festivals and what she likes about attending them, such as conversations with people she wouldn't normally meet ("A farmer in Costa Rica who watched 'Meeks Cutoff' started talking to me about religion"). She's tight-lipped about current projects but says she is working on something with Canadian novelist and screenwriter, Patrick deWitt, but "who knows?" Today has been frustrating and this walk was to get away from work, she adds.

After a few more minutes of small talk, she's made her short journey to Mount Tabor, a volcanic cinder cone in southeastern Portland. Her breathing changes as she begins to truck uphill in a country-like setting. Time to get off the phone.

"I'm looking forward to coming to Richmond," she says, "but right now I've got to figure out where I am." S