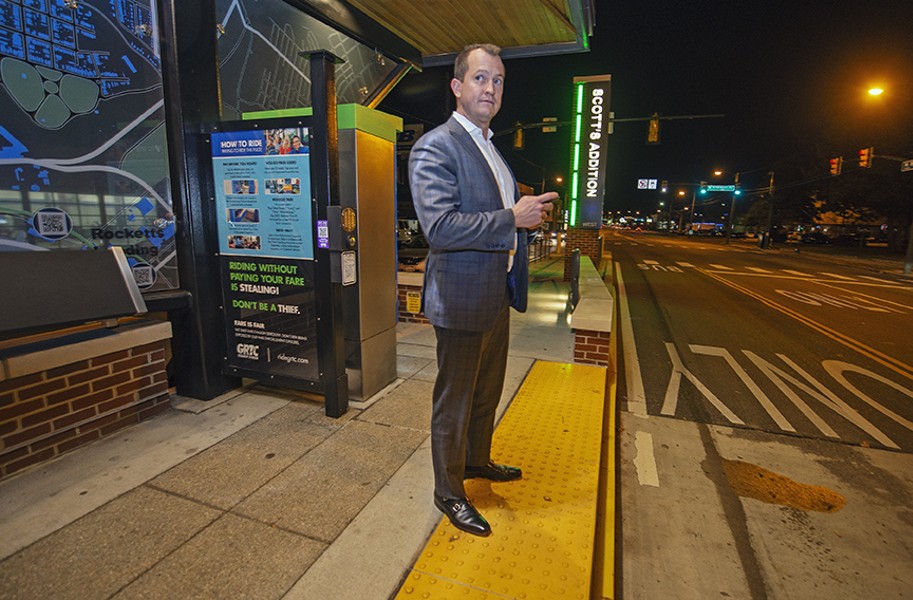 Ash Daniel First District City Council member Andreas Addison stands at a Pulse stop in Scott’s Addition. Addison gave up use of his car for November.

Nearly a quarter of Richmond households don’t own cars. To get a better sense of the obstacles and problems they face, 1st District Councilor Andreas Addison gave up his car for November.

It’s part of a citywide focus on safety, which Addison hopes to improve with Streets for All proposals he introduced Nov 12. But first, he had to walk the walk.

“I have to go out and understand the challenges if I’m going to write legislation around this,” he says. His car-free month, documented on Twitter, included missed bus trips, disappearing sidewalks and inattentive drivers who nearly hit him.

“Several times, in crosswalks,” he says about the near misses. “They look up stunned, like, ‘What are you doing?’ I’m where I’m supposed to be, I’m following the law.”

The bus had its own problems. Scheduled buses didn’t show up, and even riding the Pulse was challenging. Although he’d factor in extra time, frequently he found himself waiting to cross Broad as a bus rolled by. “I push the button, by the time the light changes, the bus has already left,” he says.

His proposal, a collection of five ordinances and five resolutions, was inspired by similar legislation in Washington., and establishes funding for Vision Zero, a safety program that seeks to eliminate roadside deaths. Although Vision Zero plans have been adopted across America, pedestrian death rates are increasing nationwide, fueled by driver distraction and an increase in SUVs according to a report from the Governors Highway Safety Association.

Vision Zero originated in Sweden as an ambitious rethinking of infrastructure and engineering, but in American cities, bike advocates have decried local implementation as glorified marketing campaigns. Addison’s bill would require more, establishing the budget for a program coordinator and dedicating $1 million a year to Vision Zero projects.

Bike Walk RVA Director Louise Lockett Gordon says she welcomes Addison’s proposals. “The ordinances push us to ask if we’re being proactive about biking and walking,” she says, and adds the wrap-around policies the city will need when it finally gets infrastructure in place. She’s also in favor of a study proposed by 9th District Councilor Michael Jones to reduce the city speed limit to 35 mph. For most crashes, especially those involving pedestrians, she says, “Speed is the biggest factor determining survival.”

Lockett Gordon hopes this focus will speed up implementation of a citywide network of bike lanes. “Folks are riding to the corner store, to school, work or just trying to get out to a park,” she says. “The people you see on TV are in Lycra, racing, so that’s who we think about when we think about people biking. We want safer streets for them, too,” she says, but “there are plenty of people out there biking around for different reasons, and we want them to be able to do so comfortably in a connected network that provides space and safety.”

Addison’s legislative aide, Daniel Wagner, is one of those everyday riders. He’s a bike commuter, pedestrian and bus rider, and he says it helps him to appreciate the city better and connect with others. “It’s humanizing. Even if you’re just making eye contact, you’re interacting with your neighbors in a way that you’re not in a car.”

It’s a perspective Addison shares, saying he really hopes to change the culture of Richmond. “I don’t want to just keep putting down speed tables,” he says. Instead, he wants people to think about the harm they could cause their neighbors and drive carefully. “I want people to slow down and follow the laws. Yield to pedestrians in crosswalks, stop at stop signs.”

He points to Charlottesville as an inspiration, saying, “They have more crosswalks, more midblock crossings and people yield for you. It’s just 60 miles away. How do we get that here?”

Both Addison and Gordon think the city is moving in the right direction, but say it needs to keep pushing. Addison adds that we need a better process for collecting and acting on complaints. When someone reports a dangerous intersection, he asks, “Who gets that? The police? Engineering?” The Vision Zero coordinator he envisions would be the intermediary who assigns the report to the right department, then follows up to make sure it was resolved.

In addition to the proposal, Addison is pushing several fixes, including in-street signs for pedestrian crossings, better-marked crosswalks, and public street art and planters in intersections to prevent illegal parking and obstructed sightlines.

“People are afraid to give up parking, but the convenience of close parking isn’t worth making the street more dangerous. It’s better to make sure somebody doesn’t get hit by a person driving a car,” he says.

He doesn’t think everything needs to be tackled through new legislation or complicated overhauls, though.

“I get a lot of complaints about Grove Avenue in the Museum District,” he says, from constituents worried about automobile traffic. Fiscal constraints, fire hydrants and rights of way all stood in the path of a comprehensive redesign. But instead of giving up, his response was to propose something simpler, and a little more hopeful.

“Let’s just put up the [yield to pedestrian] signs, paint the crosswalks, it’s six intersections,” he says. “We’re not talking about a lot. And look, after six months, I bet we’ll see behavior change.”