With the death of Robyn Hightman, bike communities in Richmond and New York stage memorial rides and protests. 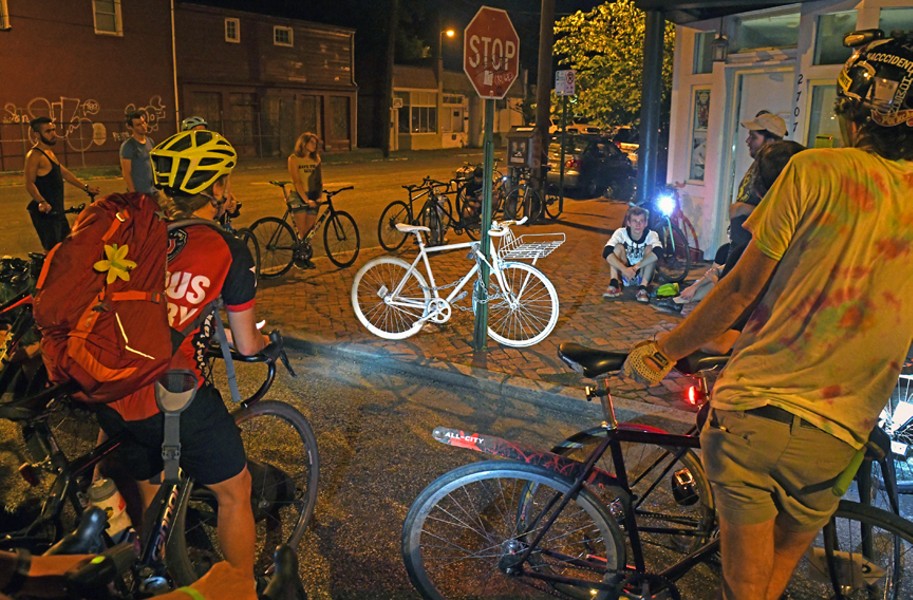 Scott Elmquist Friends of Robyn Hightman place a ghost bike at 27th and Marshall streets in front of WPA Bakery. Well-respected in the local cycling community, Hightman was killed while working as a bike messenger in New York on June 24.

More than 50 friends and colleagues gathered on Wednesday night, July 10, to remember Robyn Hightman, a local bike courier and racer who died after being struck by a delivery truck in New York on June 24.

Although only 20 years old, Hightman, who used the pronouns they and their, had managed local courier company, Quickness RVA, and was a beloved member of the Richmond bicycling community. Hightman was on a wave of success before their death, having been accepted to a mentorship program with the Hagens Berman Supermint Pro Cycling Team, and a new job as a courier in New York.

One of the many Richmond clubs Hightman rode with, DFL RVA, organized this latest memorial ride, which began in Federal Park at a small shrine established last month. Friends and fellow club members rode up in small groups just before 8 p.m., along with former co-workers at Quickness and other members of the bike community.

One of those friends, Jennifer Durose, described Hightman as a welcoming, nonjudgmental ambassador for biking.

"I hadn't biked since I was pregnant with my daughter," she says, explaining more than a decade off the bike. "But Robyn didn't care how long I'd been riding, how good I was, how knowledgeable. They just kept inviting me and encouraging me."

Durose also spoke about Hightman's rare ability to reach across cliques and social divisions in biking. While many Saturday bike-shop rides are attended by older, mostly white, male road cyclists in spandex, Hightman spent most of the time with Richmond's more diverse, and less ostentatious, bike messenger community.

"Robyn was someone I held up to my daughter as a role model," Durose says, tying together stories that depicted Hightman's rare blend of humility, strength, kindness, and courage.

Other riders knew Hightman principally for superhuman feats on a single-speed, fixed-gear bike. Rides that would be challenging enough on a geared bike, like a three-day ride to New York or a 200-mile ride to Jamestown and back, twice, in a single day, established Hightman's reputation as a racer with professional potential.

While attendees shared memories of their friend, a white ghost bike was wheeled into the park by Hightman's friends, Jay and Mitch. Jay, the principal mechanic who built and spray-painted the bike from a donated junker, took turns pushing it with Mitch as they rode across the city to Church Hill, where it would be chained as a memorial to Hightman's memory.

The assembled crowd rode in a funeral procession, cutting across the Fan through Broad Street and over the Leigh Street viaduct. Music across genres played on boom boxes and Bluetooth speakers and the riders stopped briefly to ride laps around the parking lot at Second and Marshall.

A ceremonial installation was held at the intersection of 27th and Marshall, near Hightman's former apartment. As dog walkers and neighbors stopped to watch, friends chained the bike to a stop sign in front of WPA Bakery and gave impromptu speeches.

Jay started by thanking the donor of the bike, although he'd had reservations when he saw its initial condition. "I had a lot of worries about it, because it was a piece of junk," he says. "Robyn never, ever would have ridden it. But it's beautiful now."

"I don't have anything to fucking say about this," added another friend, who spoke through tears and poured out a water bottle to commemorate the memorial.

Others decorated the bike with flowers and personal flair, including an accessory that looked like a fake raccoon tail.

Jackie Waters, a local cyclist who credits Hightman with inspiring her to train for the infamously hardcore Trans Am Bike Race, delivered a succinct final tribute.

"Robyn rides forever," she says, before attendees got back on their bikes and rode forth, celebrating the life and memory of one of Richmond's most beloved bicyclists.